available as an ebook or paperback
from Dreamspinner Press 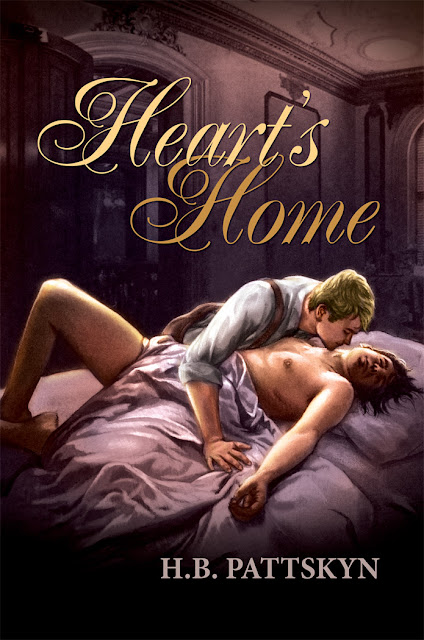 Outcast werewolf Alun Blaney is jaded, fearful of what could happen if even one human were to discover monsters are real. Police Constable James Heron is an idealistic young man convinced that love can overcome any differences. When they meet over the body of a woman murdered in the streets of 19th century London, they form an uneasy friendship.

As the murder investigation progresses, the attraction between them grows, but before they can see the case or their relationship through, there are obstacles to overcome. A sadistic pack leader is out to get Alun, a daemon has fallen in love with James, and James’s immediate supervisor is determined to pin the recent murders—and last year’s rash of Whitechapel homicides—on Alun.
(by the way, that's James on top on the cover.)


THE morning after a second woman’s mutilated body was found in Whitechapel, Alun was yanked from his doss house bed and deposited on the hard wooden floor with a painful thump. He yelped, but didn’t fight back. His assailants could only be described as a pair of common ruffians—except there wasn’t anything common about them. They weren’t even human, they were lycanthropes, not that any human looking at the two huge burly men would ever know it.

As soon as they let go of him, Alun rolled over, belly up, and tilted his chin, offering his throat in submission. Another lycan, a female called Rhianna, crouched in the shadows, in her wolf form. She was a full-blooded lycan, like Alun, but where he was lean and hard muscled, she was emaciated. Her shaggy black coat was gnarled and matted, her dark eyes were dull and sunken in. Alun’s heart ached as he counted her ribs from across the room. Females should be cherished, protected, not left to starve. His heart ached all the more because this female was Dark Moon-born, a Spirit Dancer like him, someone who could pierce the veil and transverse between this world and the next—though unlike him, Rhianna was fully trained and initiated and should have been held in highest regard by her pack. When Alun met her gaze, Rhianna’s lip curled back in a snarl. She had never made any secret of her distain for him. None of them did.


The fourth and final member of the party stood by the door, calmly watching the scene unfold, a smug, self-satisfied grin on his face. His name was Percival Shilton, and he was the London pack’s leader, a muscular, tawny-skinned man with too-long red hair and humorless silver eyes. He strode over to Alun and knelt next to his head, placing one large calloused hand casually on his throat. Alun tilted his head back further and returned his gaze submissively to the floor.


“There’s a good cwn,” crooned the pack leader, his tone patronizing. Speaking Welsh—cwn was the word for “dog”—when he himself was English, only added insult to injury. Or perhaps injury to insult. Alun wasn’t a dog, he was a full-blooded lycanthrope, and they both knew it. Even so, he kept his tongue still. Speaking out of turn would only make things worse than they already were. “You are my little doggie, aren’t you, lad?” Rather than waiting for a reply, he released his hold on the Welshman’s throat and lifted his hand to Alun’s lips. Though it sickened Alun to the very marrow of his bones, he rubbed his face against the pack leader’s outstretched fingers, nuzzling them, kissing his knuckles and covering himself in the other’s repugnant scent as if he were little more than a lap dog showing obeisance to his master. He kept it up until Percival finally patted his cheek in mock-affection. “Such a good boy,” he soothed, stroking Alun’s face and hair. “Such an obedient little doggie. Aren’t you?”


Alun swallowed back the bile burning in his throat and closed his eyes. “Yes, my Lord.” He had to force the words out. Percival settled his hand on Alun’s throat again, just lightly, and turned to the two big sneering lycans standing near the door. “See, what did I say, boys? He’s a good doggie.” But when he looked back down at Alun, his face grew cold. “Or has ye been a naughty little doggie?” he queried, tightening his grip on Alun’s neck. “Been sniffing up whores’ skirts, cwn?”


Trembling, Alun shook his head. “I swear, m’Lord, I had nothing to do with those women.”


Percival snorted. “I’m sure you didn’t.” It was no secret that Alun fancied men. Percival grabbed hold of his hair, pulling it so tight Alun’s eyes watered—but he didn’t dare move. The pack leader smirked and pulled Alun’s face up right next to his own, so that when he spoke, Alun felt the heat of his breath and smelled his last meal rotting in his teeth. “I’ll make ya a deal, ya wretched cwn, ’cause I know ya don’t want to be seeing my face again any more than I


want to be seeing yours. You’ll find the mongrel who’s killing whores before the Yard comes sniffing round the wrong doors an’ finds things we don’t want ’em to find.”


Alun swallowed hard and would have nodded if he could have, but instead, he was forced to speak. “Yes, m’Lord,” he agreed, knowing as well as the rest of them that lycans would only survive as long as humans didn’t believe in monsters any more. If that perception changed, it would be the Spanish Inquisition all over again.


“I don’t know why your father disowned you; you’re such a good little lap dog. But just so’s we understand each other,” he stood up and motioned to the two big lycans who had roused Alun from his bed, “I want ya to know what’ll happen the next time ya see me….”

I conceived of the idea for Heart's Home at Dragon*con, 2010. I started writing it there, and would continue to write it through June of 2011, when it wasn't so much finished as I didn't want to look at it again, or make a single edit until somebody was paying me to do so.

I still gave it one more quick once-over!

Then I assembled my list of potential publishers, said a prayer, and sent my manuscript off to my top choice, Dreamspinner Press. I went merrily to work on another project, which kept my mind occupied for several weeks. The response time Dreamspinner promises is something like 6 to 8 weeks--which is darned good compared to most "big name" book publishers that ask you to wait easily twice that before letting you know they've rejected your manuscript.

No, that's no pessimism, it's just the way publishing works. There are all kinds of reasons for a publisher not to take your book, most of which have nothing to do with the quality of the writing.

So, since I knew Dreamspinner wouldn't take my book, I started trying to figure out who my second pick was (you *always* start at the top of your list and work your way down. Never start at the bottom, you'll be left wondering, "gosh, would #1 or #2 have taken me, if I didn't submit to #20 first?")

The, I found an email in my inbox from Elizabeth at Dreamspinner. The subject line read: "Contract"

I stared at it for five minutes before opening it. I re-read it five times. I re-read it all the following week, even after I'd signed the contract! When my advance check came in, it finally started to feel real.

But here we are, I'm about to have books in hand!

It's been a marvelous ride and I am grateful not only to Dreamspinner for taking a chance on an unknown, unpublished author, but to the wonderful Editing Team for beating my manuscript into shape!

Although for reasons which don't bear going into, I'm no longer on speaking terms with my primary beta reader, I'm still grateful to her for the hard work she put into it. Unfortunately, some friendships don't work out, but that doesn't negate the love and support she gave me *during* the process.

If anyone has the burning desire for an autographed copy, please contact me. I have a limited number of copies on hand  and would be more than happy to sign one for you! (cost: regular cover price + shipping).