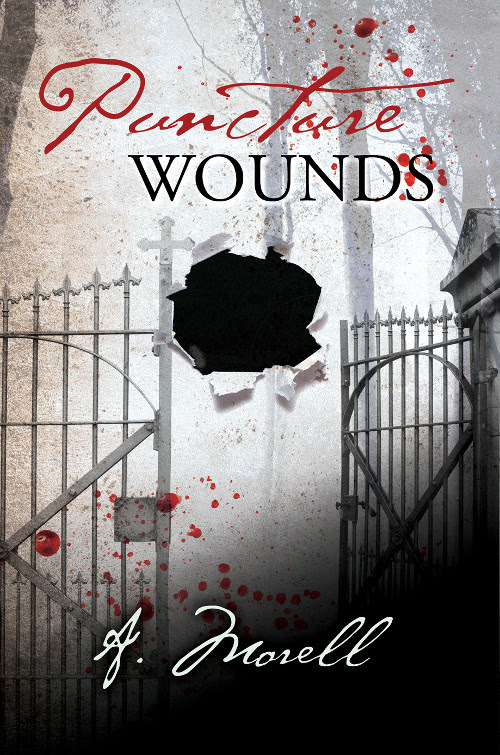 James is at the end of a long crusade for vengeance against the vampire clan that destroyed everything he held dear. He has Ren, the final and most dangerous of them all, cornered at last in London. But victory remains just out of reach when Ren sets a feral vampire on James and makes his escape. With no other leads, James is forced to take in the feral until he can use its connection to its sire to track down Ren. But in caring for the vampire, James sees they might not all be the monsters he thought them to be. Faced with an ugly truth, his quest for revenge becomes a war for retribution, and the discovery of what it truly means to be human.

Puncture Wounds
by A. Morell

Happy release day! It's been a fun ride getting the story to this point, and at long last it's available to all. Join James on his journey, and help him see it through to the bitter end. Congrats to all my winners, enjoy your free copies! Read on for an excerpt and links to some exclusive sneak peeks into the story:


James fumbled to regain control, and it took a second to realize that it wasn’t teeth he felt now—it was a soft and damp tongue. The almost constant rumbling from deep in the creature’s chest had morphed at some point, from warning growls to what sounded suspiciously like a purr. James felt his skin crawl and tore himself away, stumbling a bit when he stood too fast.

He was reeling. Everything from the past twenty-four hours suddenly came crashing down around him at once. In so short a time, he’d had the last of his sworn enemies in the palm of his hand, let him escape, and brought a feral monster into his own house. And he’d fed it.

James fumbled his way into the kitchen, eying the sink as he felt his stomach threaten to heave. He pushed himself to the fridge, grabbing a nutrition drink and forcing its contents down his throat along with the bile. He reminded himself that he needed it to help his blood recover, and this was all according to plan—take in the feral and get it sane enough to track the one who’d made it.
He braced himself against the counter with both arms, repeating the plan in his head until the moment passed.
He was too busy to notice at first, but something was wrong—nothing hurt. He looked back down at his arm.
It had completely healed.


More on Puncture Wounds:
Start the first chapter | Behind-the-scenes glimpse | Have a taste | A look at the characters

Hailing from the San Francisco Bay Area, she greatly enjoys food, baseball, shopping, tattoos, karaoke, and old bookstores. She is averse to spiders, zombies, over-used words, tardiness, inclement weather, and the misquotation of movie lines and lyrics. Her dream is to retire to Hawaii immediately. She has one cat.

For more A. Morell, stop by the blog or twitter, or contact directly at sans.morale@gmail.com.
Posted by H.B. Pattskyn at 12:00 AM