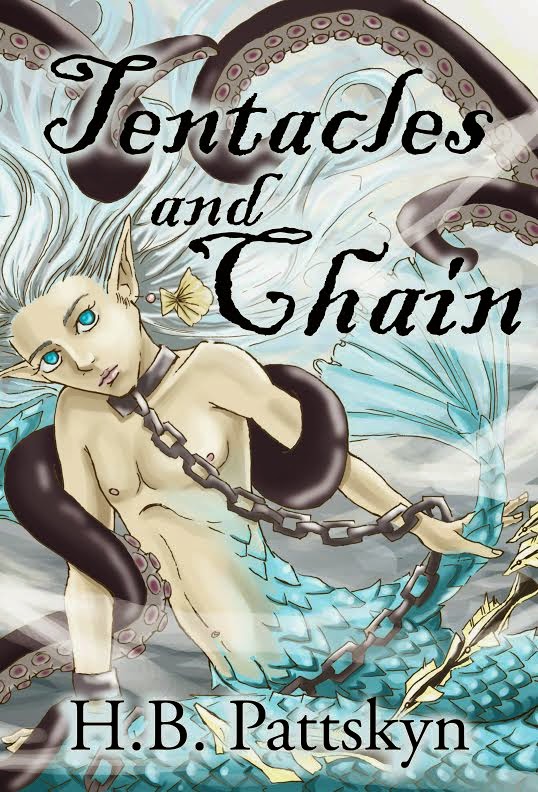 TRELLEN’S heart beat faster as deceptively gentle hands—or at least he presumed the gentleness was a deception—pulled his arms away from his body. Too afraid to do anything else, he remained posed like that, his arms out, his body on display, while the water shifted around him. He had the sense that Master was circling him, like a shark stalking its next meal.

Was it too much to hope that the Unspeakable One would find some fault in him that would make him undesirable?

Or did it matter?

Even if he was flawed, he could still be used. Trellen shivered. Why didn’t the monster simply take what he wanted and get it over with? As long moments ticked past, it became harder and harder for Trellen to resist the urge to wrap his arms back around his midsection, to give himself whatever meager protection he could against what he imagined was to come. But he’d given his word.

He would submit without fighting, and what was he worth if he didn’t keep his word? Even when it’s to a monster. It wasn’t the integrity of the other person that mattered; it was his own. The Unspeakable One may violate his body, but he would never taint Trellen’s soul. Never. He would hold onto that no matter what. Because what good is it to plot my escape if I can never return home?

He jumped as a hard, cold metal ring was fitted around left wrist. Instinctively, he started to pull away—but then yielded and allowed Master to fasten the circlet in place. “Very good, Pretty,” he crooned. “I do realize this is difficult for you.”

Absently, Trellen nodded. The other probably did realize it was difficult. And he probably takes sick pleasure in it, too. A moment later, Trellen’s other wrist was similarly fitted and Master raised both of Trellen’s arms over his head, spreading them wide. Something dangled there in the darkness, hanging down from above.

But the tip of one of Master’s tentacles brushed against his lips, silencing him. “Shhhh. You have no need to ask questions. I will not keep you waiting long.” He secured one of Trellen’s wrists and then the other to what Trellen quickly figured out was sturdy chain, hanging down from the chamber’s ceiling.

Fear and anger seized him at once. “Why do you restrain me?”

But the Unspeakable one didn’t answer. Instead he lifted the chain hanging from Trellen’s collar and fastened it overhead as well, though it hung more slack than the taut chains holding Trellen’s wrists.

Trellen struggled against his bonds, but the heavy chain held fast. “I said I wouldn’t fight! Have I not been true to my word?”

Trellen’s only answer was the soft caress of Master’s fingertips, ghosting down his arms. Once again, Trellen was filled with equal measures of delight and disgust. Why must his touch feel so good?

“You have nothing to fear, Pretty. You have been most obedient—but you do still fight.”

“Shhhhh. You do. But it is all right.” Master continued to explore Trellen’s body. His chest. His stomach. The soft sounds of approval coming from him made Trellen shiver. If he could just close his eyes and pretend it was Luce maybe it wouldn’t be so bad—but when Master came to his penile slit, instinct made Trellen buck and pull away.

Master encircled his tail with a tentacle, effectively putting an end to Trellen’s struggles. “Be still, Pretty, and accept my touch.”

Trellen sagged in defeat. “I’m sorry.” He was sorry he’d gone back on his word and fought, but even more so, he was sorry for the way his body reacted, becoming increasingly aroused as the other male touched his private places.

Master used his other hand to cup Trellen’s cheek and tilt it up, perhaps so he could see Trellen’s face. “You do not need to apologize, Pretty. You have been taught that so many wonderful things are vile and wrong. I cannot blame you for the lies that others have put in your head.”
“But it is wrong.” Only he didn’t sound very convincing, even to his own ears.

“What makes it so?” Master sounded amused. It was infuriating—except it was very hard to concentrate on being angry when Master was tracing the line of Trellen’s penile slit with one fingertip, making Trellen quiver, making his blood surge and his better judgment cloud over. “Is it wrong merely because someone else says so?” Master asked. “What if I tell you it is not wrong at all?”

Master chuckled, clearly unperturbed at the accusation he must know had died on Trellen’s lips. “Tell me, Pretty, do you believe everything your Elders tell you?”

He didn’t. But….but what? He could barely think straight; his whole body was thrumming with need. “Please stop.”

“You should never be afraid or ashamed of your own pleasure,” Master told him gently. “Or someone else’s.” He feathered a soft kiss to Trellen’s cheek and whispered in his ear. “There is much I can teach you if you will allow me, my Pretty, but first you must let go of your inhibitions.” And with that, he withdrew completely.

Trellen cried out at the sudden loss of contact. What was wrong with him? “Please. Just…just do whatever you’re going to do and get it over with!”

Master let out a disappointed sounding sigh and laid both hands on Trellen’s hips. “I will be patient with you,” he said, his tone that of one addressing a petulant child. “For I knew the first time I saw you, that you were a beautiful flower worth possessing. But some flowers must be tended carefully if they are ever to bloom—and I would so love to see you blossom, my Pretty.”

The words ricocheted through Trellen’s head and for a moment the world stopped moving. The first time. Has he been watching me? For how long? But he wasn’t given much time to think about it, for while he’d been stunned into motionless silence, Master had been busy and Trellen suddenly realized that a heavy chain had been secured around his tail, just above his tailfin. He pulled at it, but it was too short to allow for much movement. He was truly helpless.

“Easy, my Pretty.” Master’s voice came from behind him now. “I know that Cetaceans fear being bound nearly as much as you fear the dark—or perhaps, what you really fear are the monsters who hide within the dark.” One tentacle slithered up Trellen’s tail, until it encircled his waist once more. Master used it to caress Trellen’s stomach and at the same time rested both his hands on Trellen’s shoulders. “You fear the unknown, although in that, you are hardly unique.” He slipped another tentacle around Trellen’s waist, this time from the other side, and then another and another, until Trellen’s tail was completely encased.

His heart beat harder and he gulped in water faster than his gills could process it. The creature could crush every bone in his tail if he chose! “Please—”

“Hush, Pretty.” He wrapped two more tentacles snuggly around Trellen’s chest causing fear to explode in Trellen’s heart. Only the chains and the Unspeakable One’s incredible strength kept Trellen from breaking his promise again and thrashing against his bonds.

Master pressed a kiss to the back of Trellen’s neck and Trellen whimpered. Heat rushed through his body. Kisses were so…intimate. And Master’s lips were so soft. So gentle. It was all too confusing.

Master continued to kiss him, to caress his skin, until Trellen’s breathing evened out, until he no longer had the urge to break free. He could hate himself all he wanted, but he couldn’t deny the pleasure he took in the other male’s touch.

But then something long and hard rubbed up against Trellen’s spine and his froze.

“Do you feel that?” Master asked, sounding amused. “Do you know what it is?”

Shame strangled the words in Trellen’s throat and all he could do was nod.

“What is it then?” Master persisted, teasing, even as he began to rub the part in question up and down along Trellen’s lower back. The sensation caused a new flood of uncomfortable desires. “Come now, you can speak. It’s only a word. Will you not say one word at your Master’s command?”

Trellen clenched his fists. It was just a word. I agreed to this. “P—”

But the tip of one of Master’s tentacles pressed against his lips. “Tut-tut. The word I am looking for begins with a different letter.” And the tentacle was gone again. He slid the organ in question up and down Trellen’s spine, past his waist, making Trellen shudder. “Come, my Pretty. What is this thing that causes you so much delight, hmm? I can feel the heat in your skin. You will never convince me that you are not enjoying this.”

“There is no shame in a word. Words are but collections of sounds used to communicate our needs and desires. Tell me, what is the name of this thing that causes you to squirm so delightfully for me?”

Defeated, Trellen gave in. “Your cock.”

*happy excited flail* So much fun!