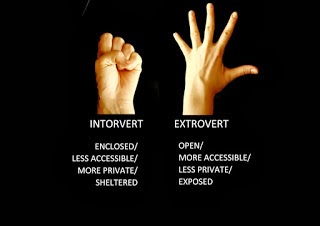 If you're a regular visitor, you probably know that I'm an introvert. It's a good thing for a writer to be; my profession demands that I spend a lot of time in my own head. But it can still be difficult to be an introvert in an extroverted world. Take the image to the left, for example. According to the illustrator, I'm closed off, like a fist clutching something. I'm "less accessible" and "sheltered." The very image of the closed fist leaves most people with a negative impression as the introvert is inherently closed off from contact/friendship. The extrovert on the other hand is an open hand waiting to be grasped; the image is decidedly positive. The extrovert is out going, "more accessible," inherently open to new contact and new friendships.

Now, I will admit that I do have a hard time making new friends, but it's not because I'm closed off or more interested in my own feelings and thoughts than I am in other people, it's that, like most introverts, I suck at small talk, so starting conversations with strangers is difficult. (For most introverts, small is tedious; I have to think about what to say and quickly run out of ways to discuss the weather. It's much easier for me to talk about things that matter to me, even if the other guy is on the opposite side of the fence. Religion, philosophy, Life...it's all good. But living in an extroverted world, I'm well aware that it is not always socially acceptable to dive right into the deep end of the pool.) 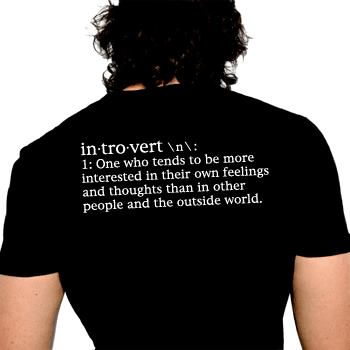 There's this awful idea floating around that introverts are selfish, self-centered, and/or stuck up. (I got called stuck up once in middle school. I was dumbstruck. I have suffered from low self esteem my entire life, and never so badly as when I was a young teen ager. And, if you take into account that introverts are quite often told to stop being so shy or that we'll never succeed if we're not more outgoing, I would wager that a lot of us grow up feeling a certain lack of self worth.)

Introverts are just as likely as the next guy to be selfless to the point of going to a restaurant we hate because it's our companion's favorite place in the whole world--and because we're typically less vocal than our extroverted counterparts, chances are our companion will never know. (Perhaps that's how this idea that we're more interested in our own feelings and thoughts than in other people got started. But take it from an "insider," introverts can be just as nosy, just as interested in gossip, and just as catty as the next guy--you'll just never know it unless you're a close and trusted friend.) 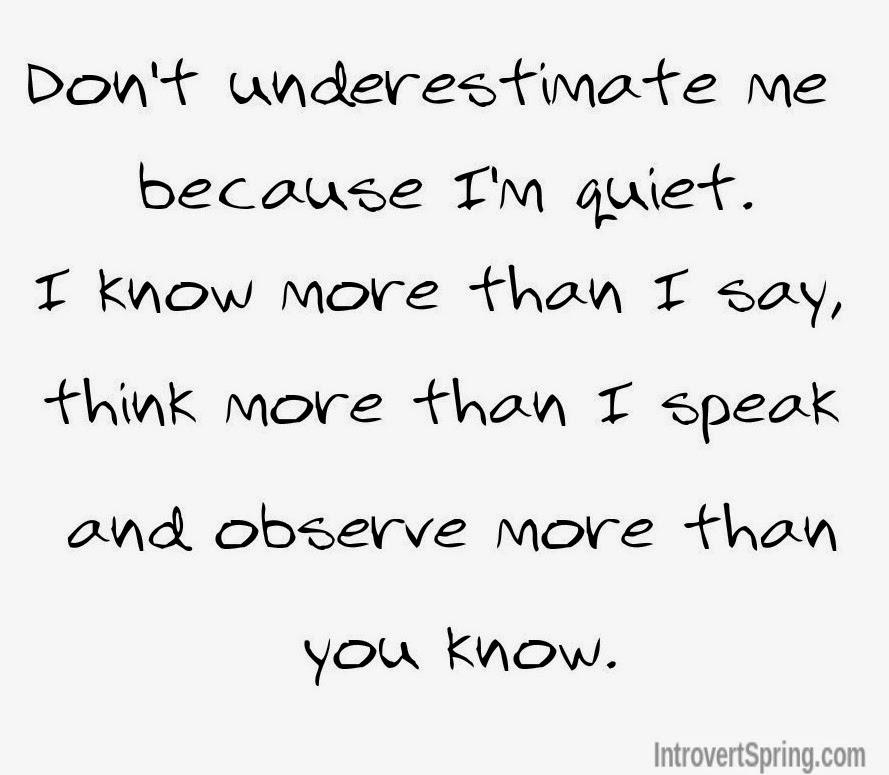 Probably the biggest misconception about introverts is that we're shy (and that we need to be pulled out of our shells or we'll end up miserable and alone--quick fact: trying to pull an introvert out of their shell when they need down time is one of the worst things a well-meaning friend can do!).

When I was little, I got told that I was shy (and that "shy" was Bad) so often that I internalized it. I spent a lot of very miserable years trying to emulate extroverted behavior--and the funniest part of all is that in reality, I am not a shy person. It is absolutely possible to be an introvert without being shy--but because I got told I was shy by the adults in my world, I assumed it was true until I was in my late-thirties.

I'm very comfortable in the spot light (although I dislike being put on the spot, I can usually adapt quickly). I enjoy sitting at a dealer table at a convention and talking to people all day (although at the end of the weekend, I need a lot of downtime where I'm not talking to anyone.) I can stand up in front of a room and give a presentation without breaking out in a cold sweat. And yes, I can even make small talk, though I find it tedious and would much rather talk about "meatier" subjects. And contrary to that first meme, I'm a very open, accessible person. So are a lot of other introverts. 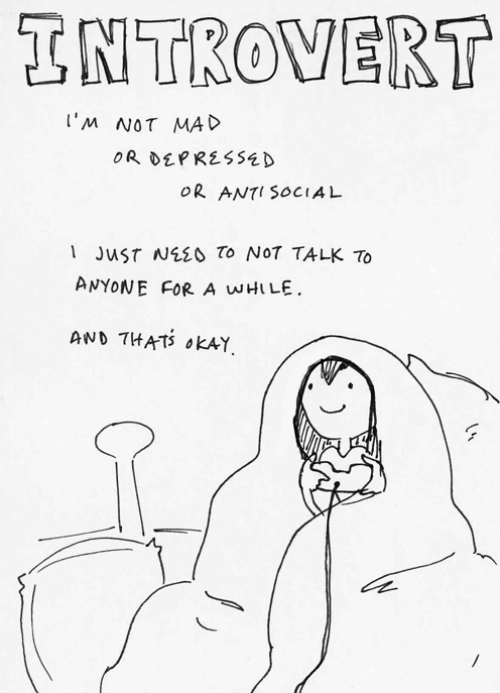 Being an introvert means that I recharge my batteries by being alone. It's probably why my hobbies are solitary activities.

Being an introvert also means that chances are that by the time I make an announcement, I have thought about it for days and researched it to death. It means that I won't talk about my new book or my new story idea until I'm good and ready to. I don't mind if people ask, but don't pressure me into talking about it because I only bounce ideas off of a very few people (and they already know who they are). Unlike my extroverted friends, I don't need to go out and socialize; I enjoy it (usually in small doses), but quiet time is necessary for my mental health. That doesn't make me anti-social, rude, or mean that I'm depressed.
Posted by H.B. Pattskyn at 9:30 AM

I am a similar type of introvert to you, it seems (though I am very close to the border between introvert and extrovert on Meyers-Briggs type tests). I need me-time to recharge. I'm still an open, often selfless, friendly person, but the key mark of my introversion is that I need me time to decompress and recharge after social time. Thanks for writing this post, it's more detailed than a lot I've read on introversion.