I bought a house!

And really, even though my husband and I are paying for it together, he couldn't make the meeting, so it's just my name on the purchase agreement, so technically, *I* bought a house  :)  (It's been a running joke for years that technically the house we're living in now is his, since my name isn't on the deed--it was another paperwork sort of thing. If you were to come over and look around, you'd realize that this place is far more me than him, even though frankly I hate it. Which is why we bought a house!)
If you've been following my life on Facebook or even in my newsletter (which is running *way* late, I apologize), you know we were trying like heck to move out of state. The Universe kept throwing us curve balls; we were also trying to move into an apartment (let somebody *else* shovel the snow for a while!) That hasn't panned out, either. So here we are with an upside down mortgage on a house we can't afford that I don't even like (although I love the garden, but that can be moved). Not 10 miles down the road is the city of Detroit (cringe now, get it over with) where there are hundreds of beautiful old homes in need of a little TLC that can be had for reasonable prices. The more TLC the more reasonable the price, of course.
We found a compromise. A house that's within our meager budget, in a pretty nice neighborhood, that doesn't need too much more work on it than we can do ourselves. And what's that in the attic? Is that a plot bunny? Why, I think it is!
People sometimes ask me where I get my ideas; the answer is EVERYWHERE!
But first, I have to finish Andy and Dillon's story  :)  The last couple of weeks have been difficult (emotionally draining with everything going on), so the writing's been slow, but I'm hoping to wrap them up in between scraping, sanding, patching, and painting. 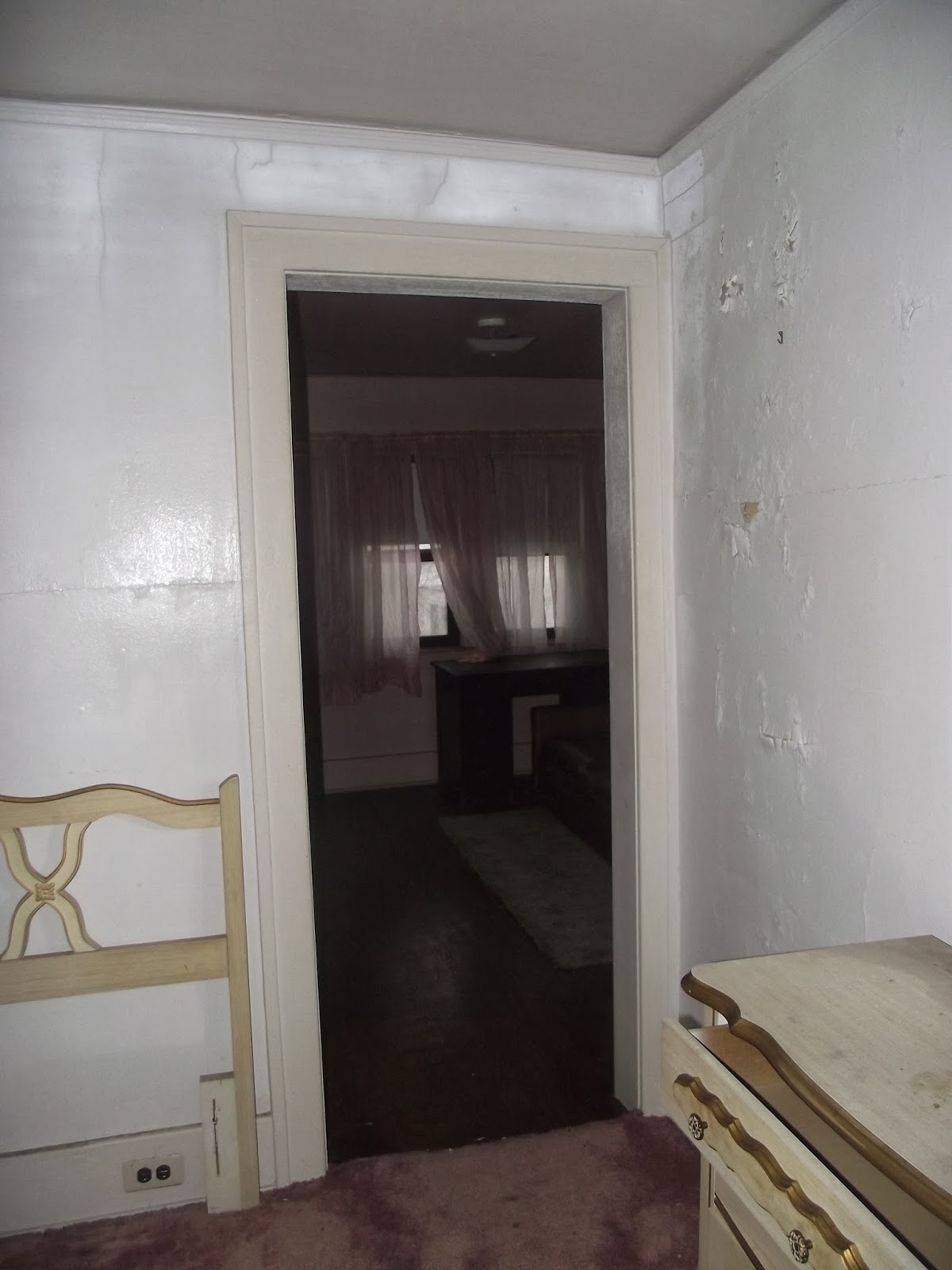 Standing in our bedroom looking into what
might have been a nursery; we're going to turn it
into a sitting room 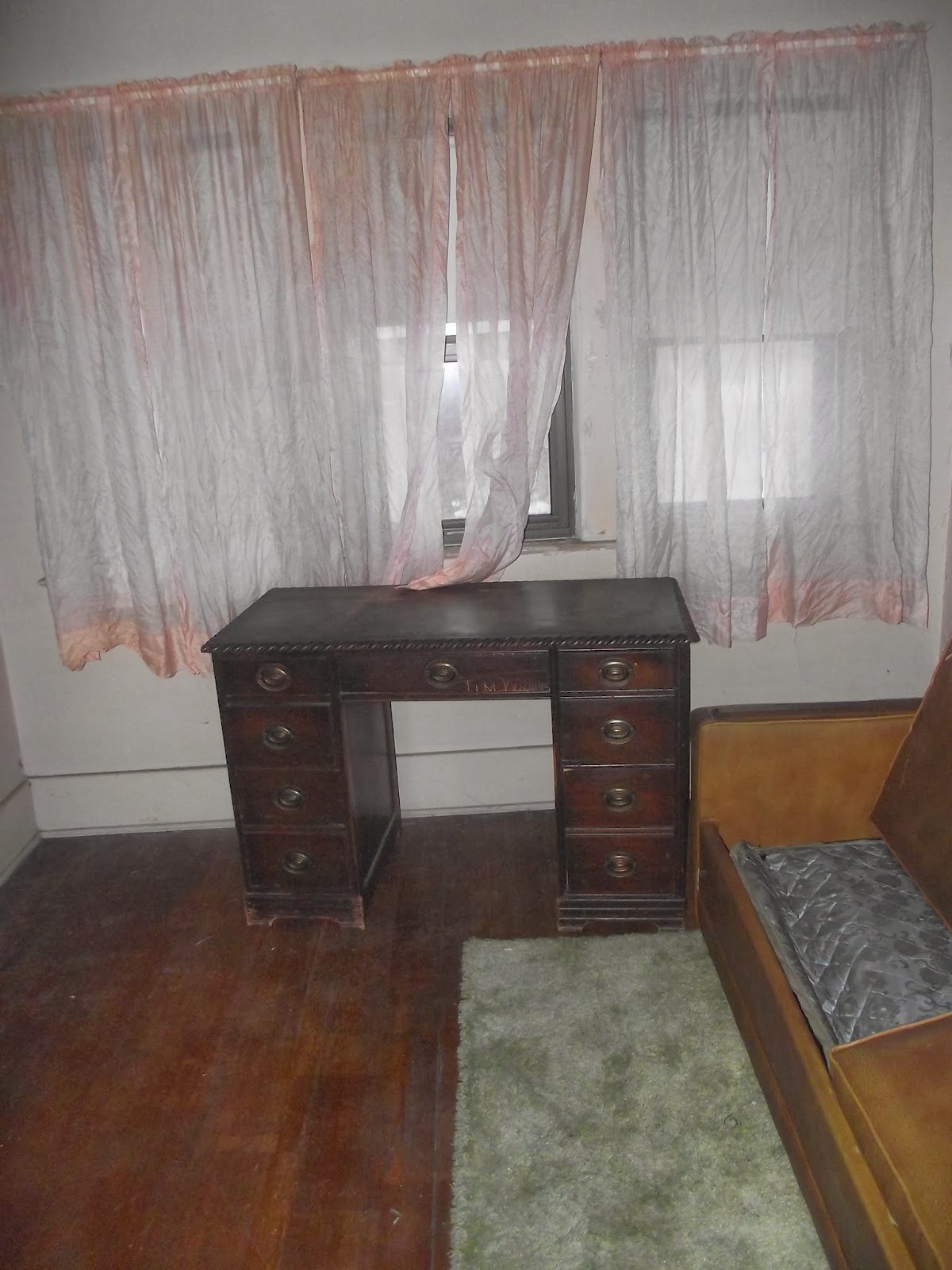 and it even has a desk!
I need to re-finish it over the summer, of course. 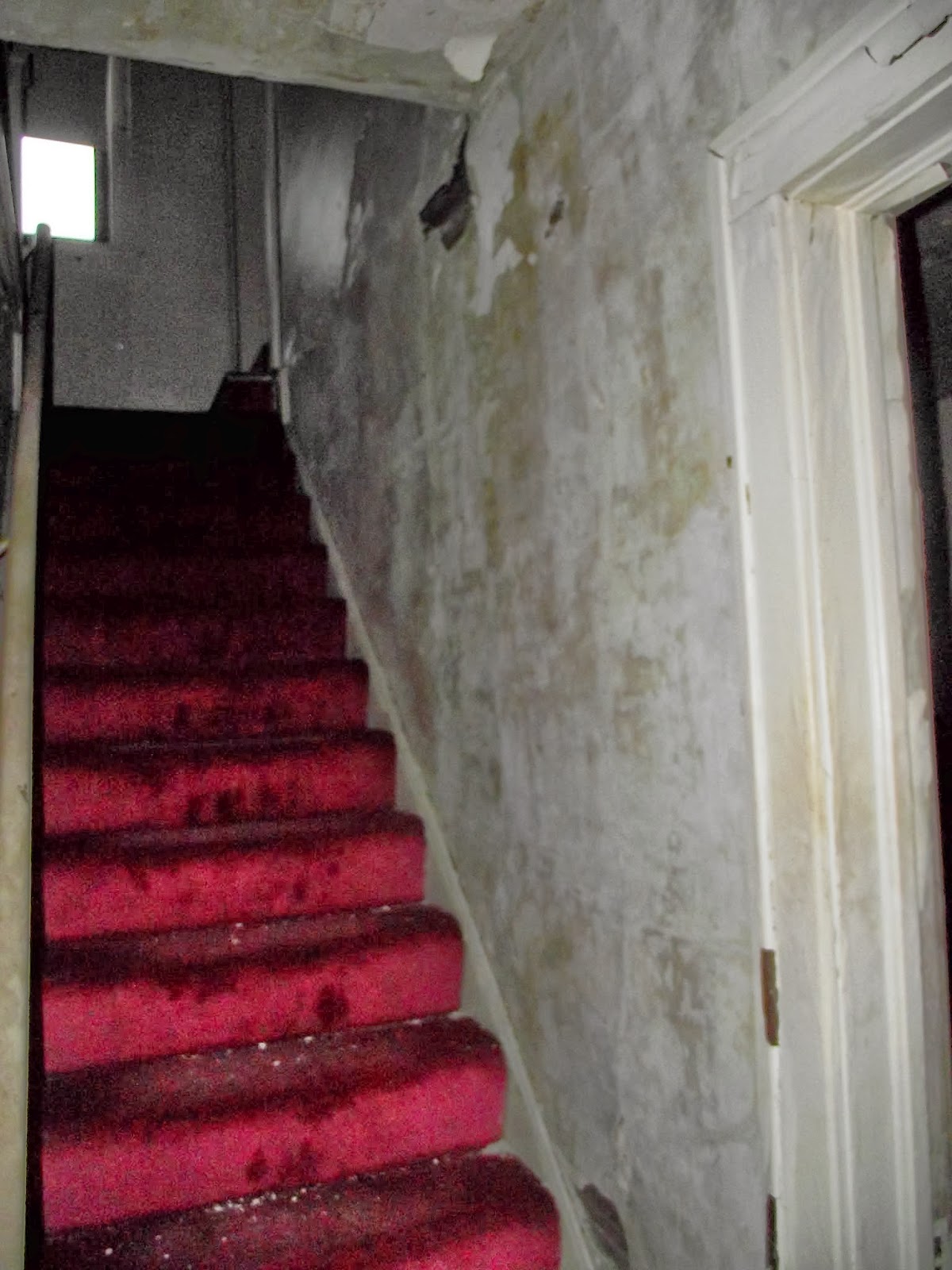 Stairwell going upstairs--drywall needs to
come out and be replaced. 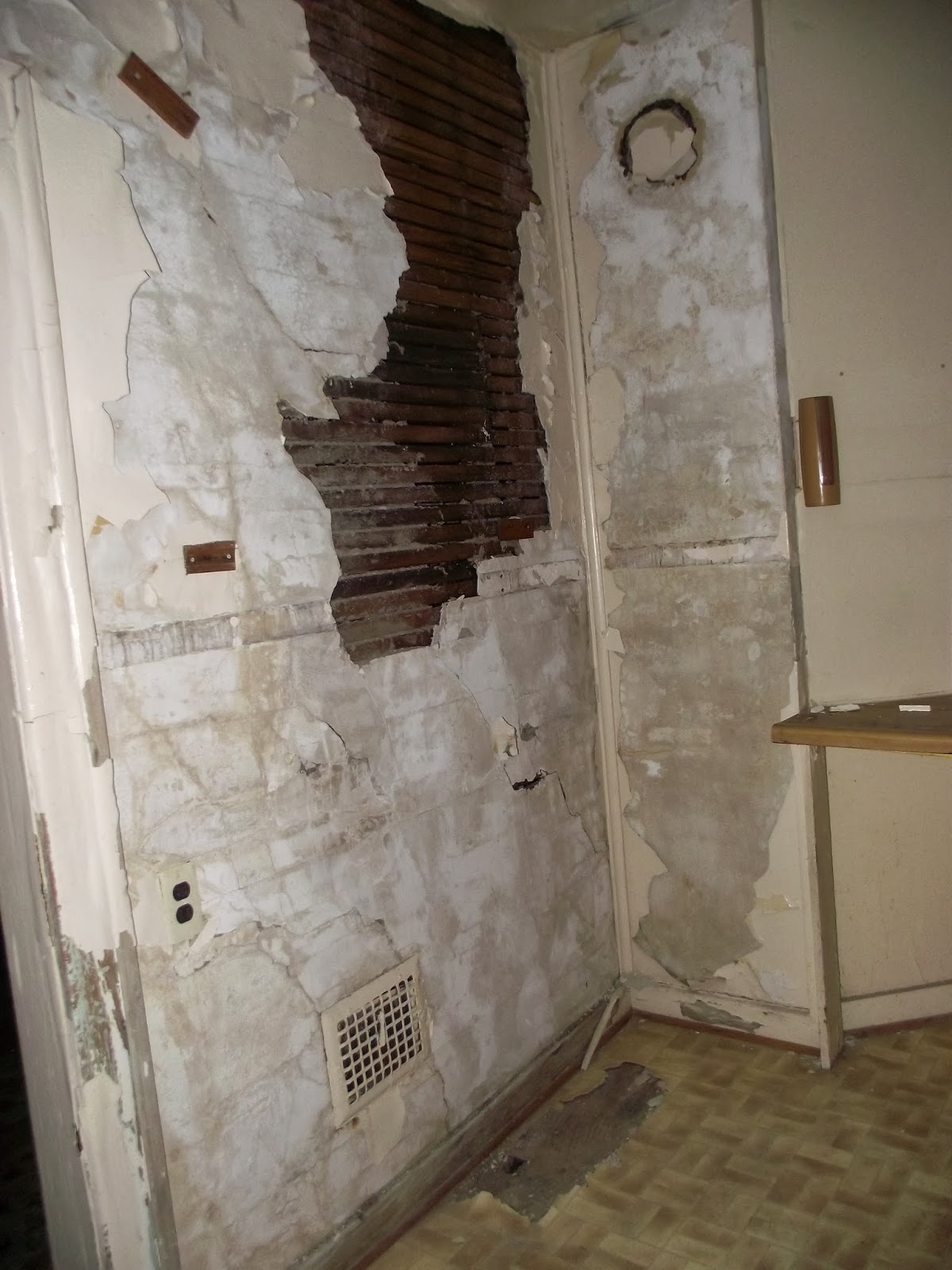 Ditto in the kitchen
(the dining room is in similar shape) 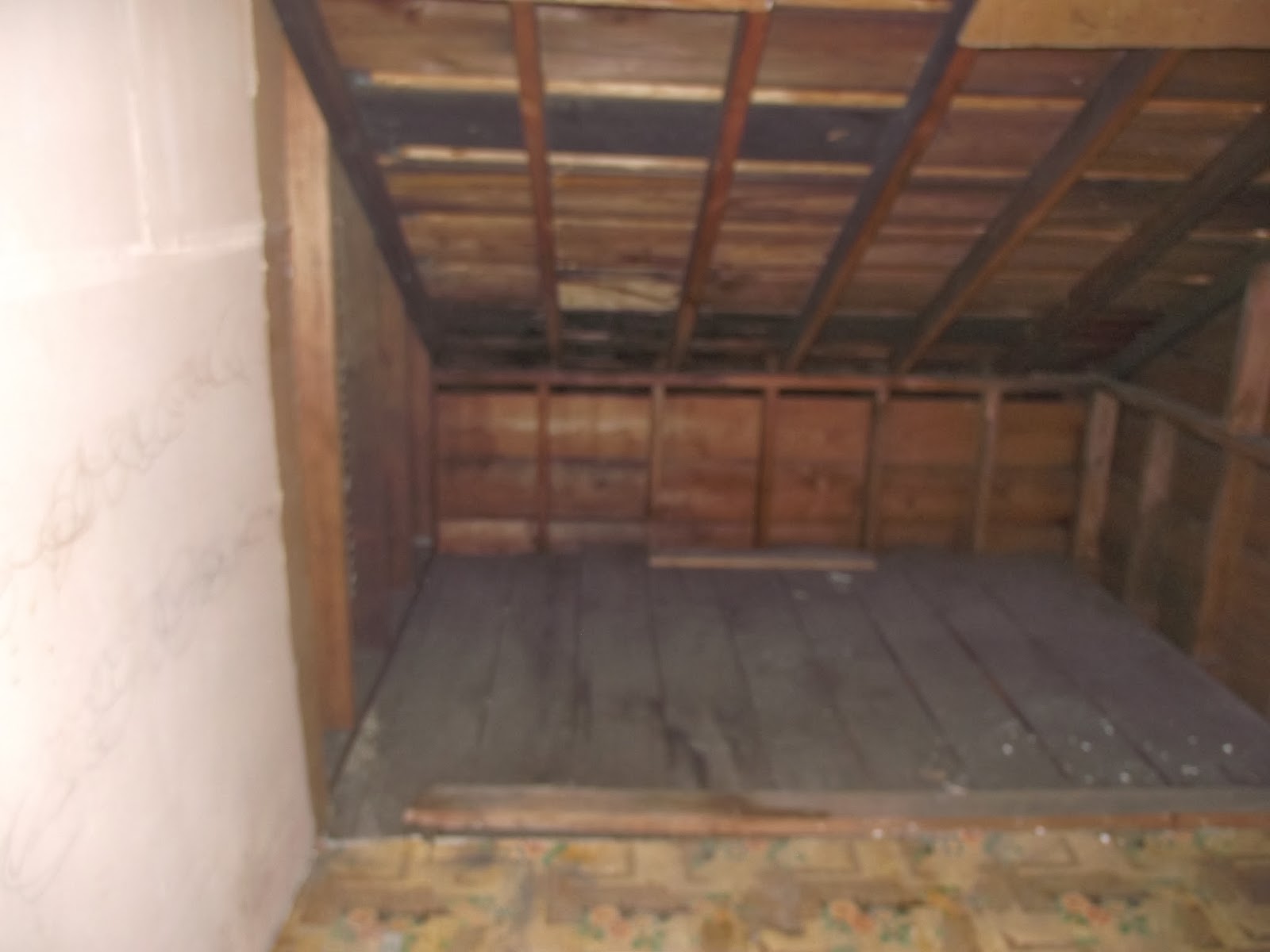 My daughter's closet; needs insolation and proper walls/ceiling
but she has a thing for huge closet spaces, so we gave her the
room with the bigger/more interesting closet. 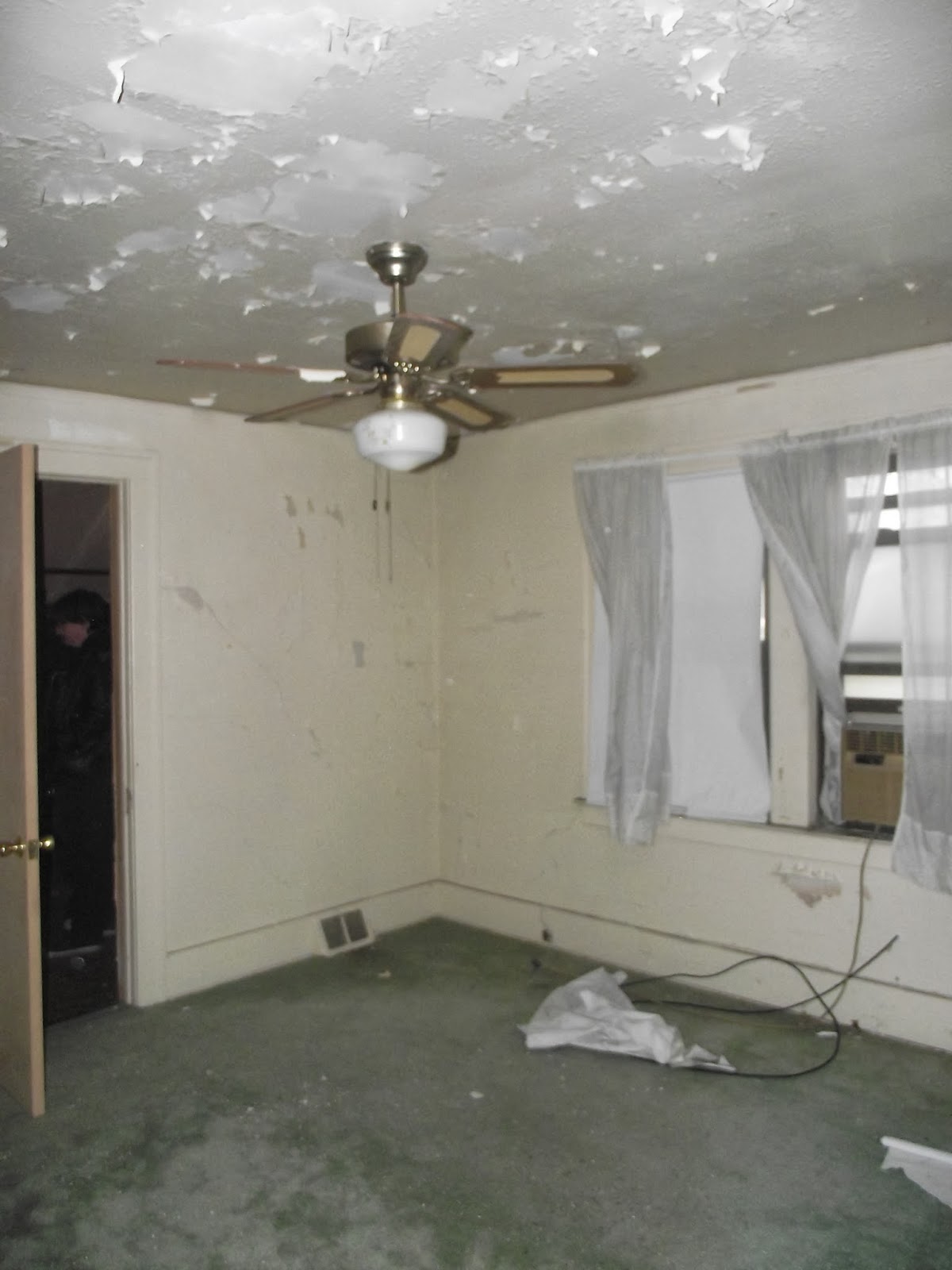 Her room--needs a good scrape and paint. 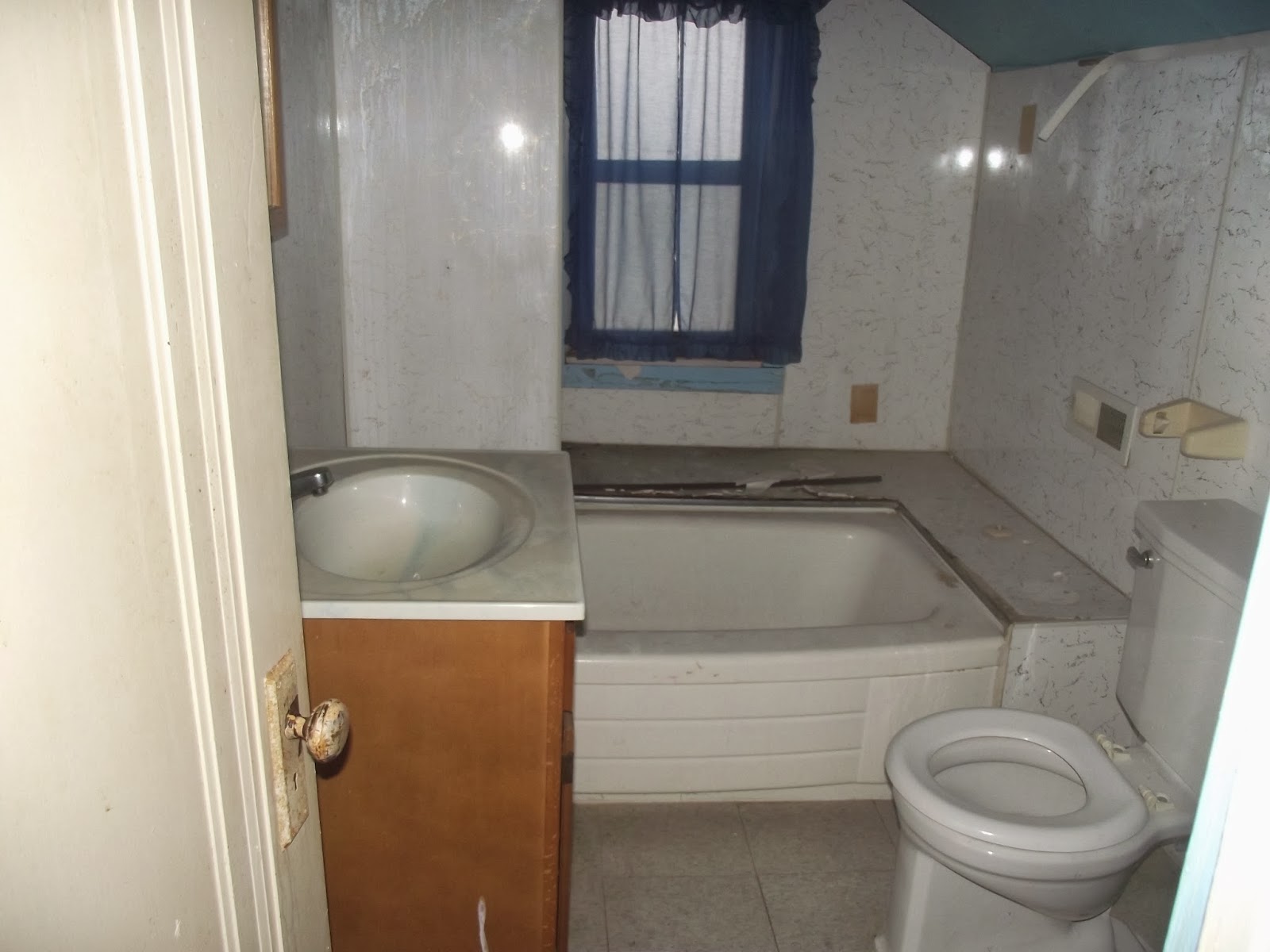 Bathrooms don't actually look too shabby
(this is the upstairs bath; downstairs is about the
same...except from some gods awful wallpaper) 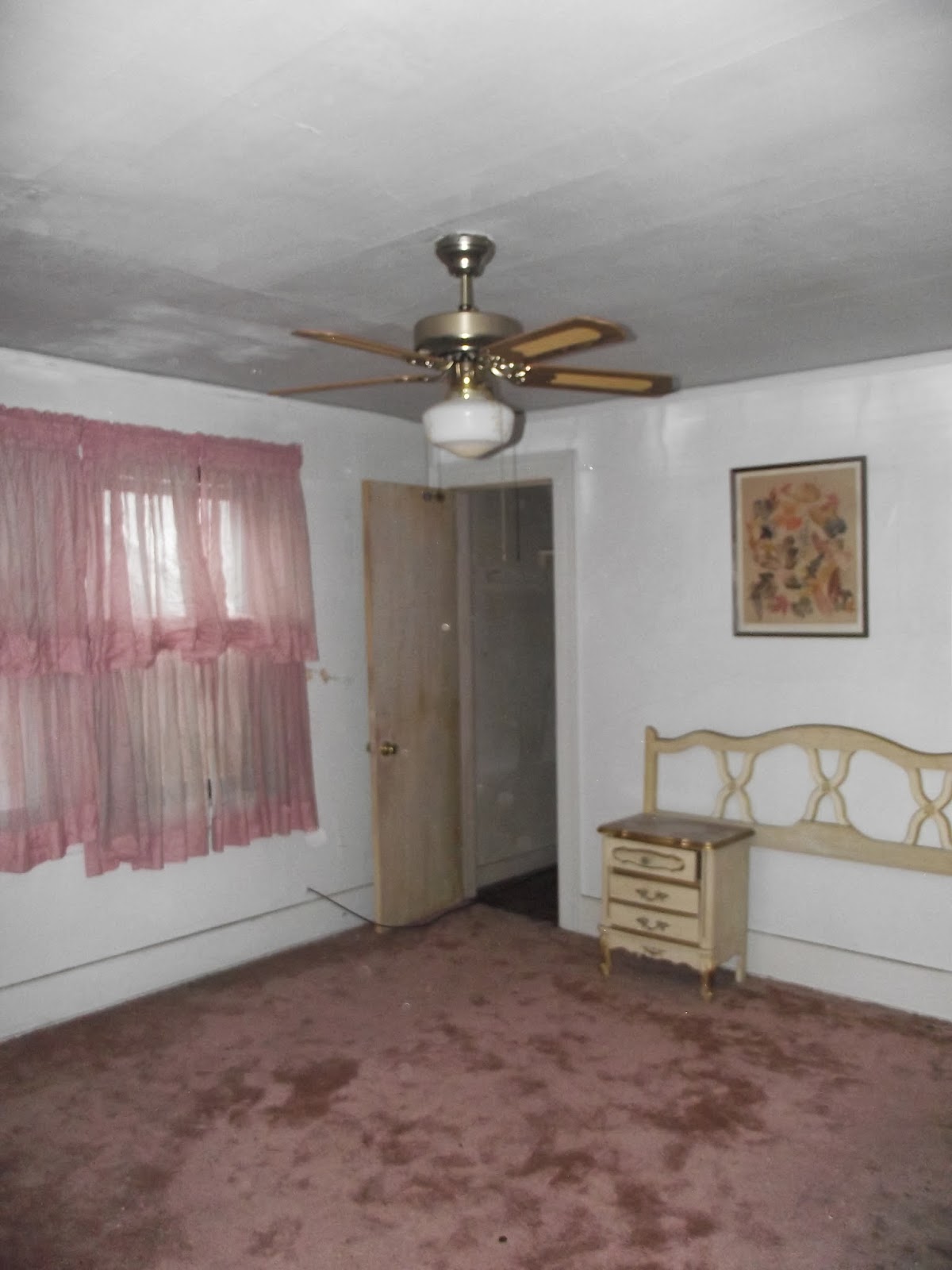 Our room again, from a different angle
we have a walk in closet, too. 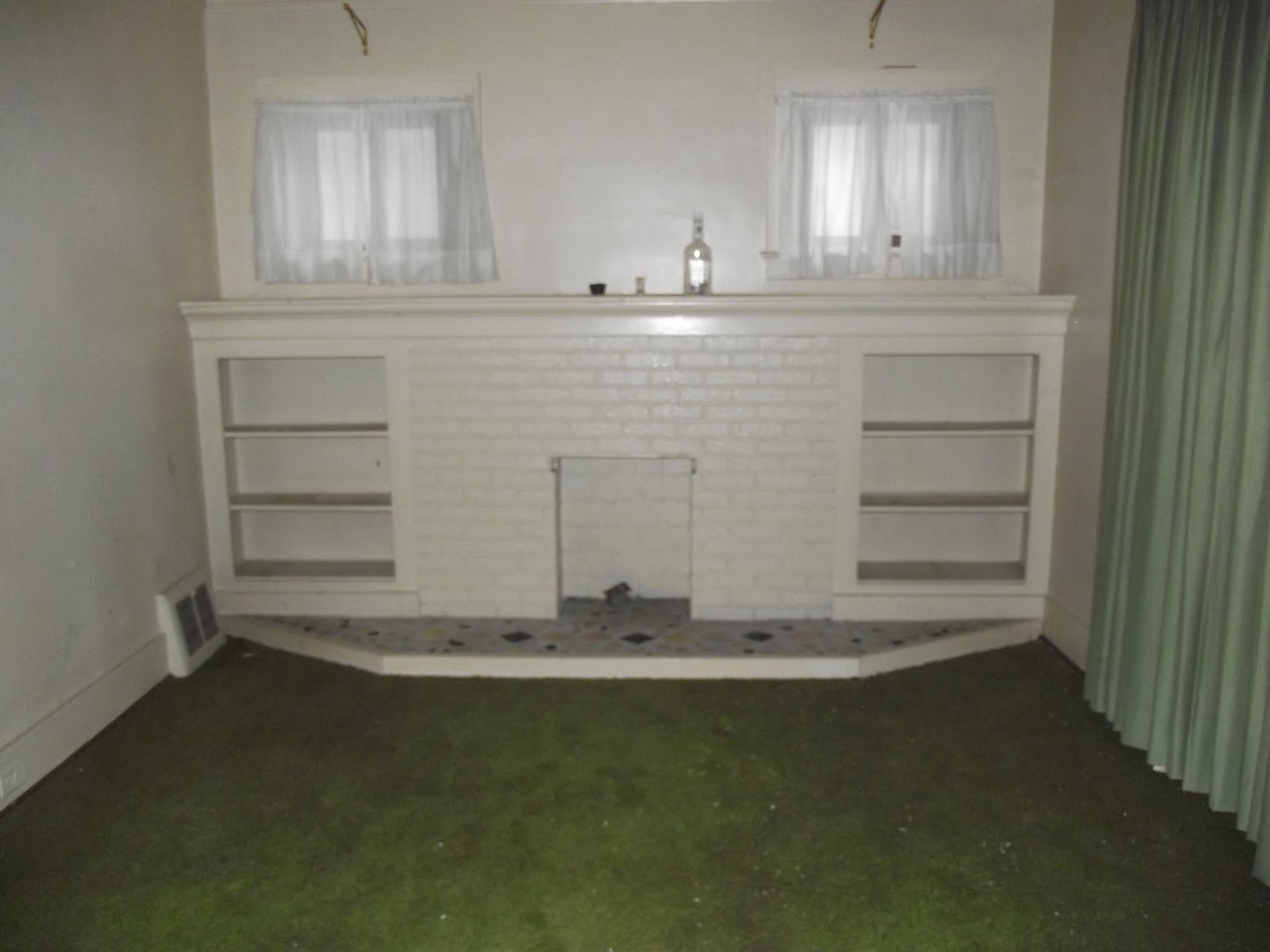 It's not a real fireplace, but still... 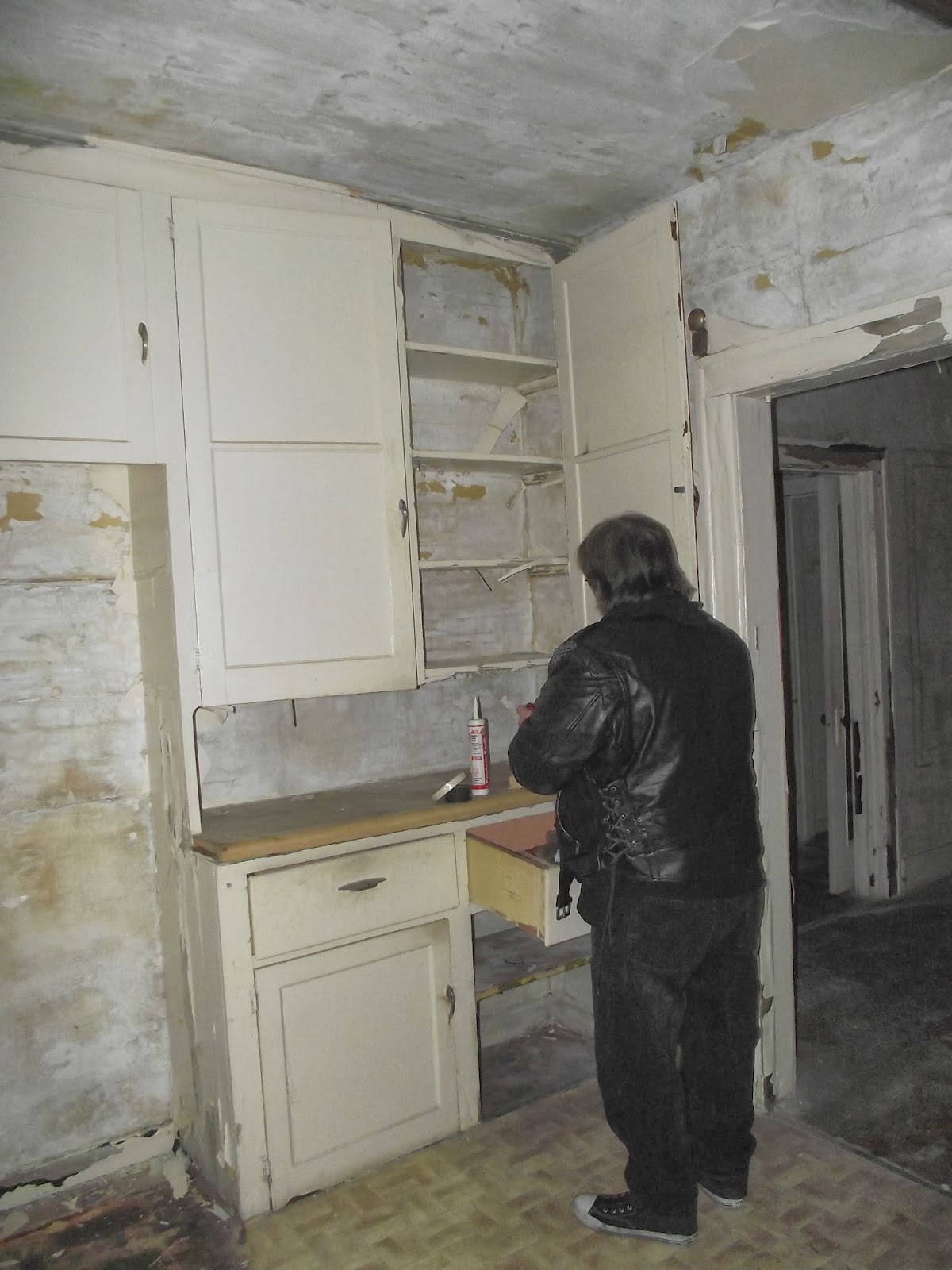 It makes up for the kitchen!
(Hubby found a junk drawer--with junk still in it *G*)
In addition, there's a little office space off the dining room,
and another bedroom upstairs we want to use as a spare room/
sitting room (we already have a futon sofa/bed).
There's an old upright piano in the basement that needs
a complete re-furbish, but it looks like it's more tan worth the effort.
And look at those ceilings. No, I don't just mean the falling paint and cracked plaster.
The ceilings are at least 10 feet tall  on most of the main floor.
Which means it'll be a bitch to keep warm and an even bigger bitch to fix, but I finally get my 100 year old house *G* (The house is currently almost 90 years old. It looks like prior to the last decade, it was kept up pretty well. We've been able to learn snippets about the couple that lived here before; last registered owner was 87 and stopped being the owner in 2004. We suspect she passed on. Prior to her, a man with the same last name had the house in his name until 2000; we're guessing he was her husband and passed away, leaving the house to her. Someone was at least paying the taxes on it until 2 years ago, but the water bill is current--and the back taxes are well within our budget to pay by the March 1st deadline.)  We bought her on a land contract (or rather *I* bought her on a land contract) and within the year, she'll be ours free and clear--at which point, yes, hubby's name will go on the deed, too  *G*
We'll be tackling the biggest projects first to make the house livable and hopefully be in there in a couple of months. (Fair warning to other bargain hunters, of all the "move in ready" homes we looked at, *this* was the nicest. Move in ready does not always mean amenities like a hot water tank or even toilets. We saw a lot of houses where the bathroom fixtures had been completely gutted. We will have to replace one of the toilets, it has a crack, but at least it was still there. The place has newer siding, newer windows, a newer roof, and updated electric.)
Posted by H.B. Pattskyn at 8:00 AM

Wait! So what was in the junk drawer?

Good luck with all the fixing, and congrats on having a 100 year old home!

The junk drawer had a couple of unopened tubes of calk (probably no less than 2 years old), screws, nails, an old door handle, some glue (old, open), and various hardware type of bits and bobs.