I've decided to use Doodle Tuesday (here's the Facebook page) as the kick in the butt I need to get back to my Tarot Deck project. Or, to be more accurate, Tarot Deck Project Take Three.  Take One was a beautiful watercolor Egyptian inspired deck that I sort of ran out of steam on. Take Two is still sitting uncolored on GINORMOUS (11x14, I think) paper. Okay, that's not really ginormous, but when you're trying to color in 80+ cards.... yes, tarot people, 80+ cards because I'm a masochist...erm, I mean I was inspired by the Minchiate Tarot, in particular Brian Williams' deck. I'm not working in the same style as Brian Williams, but I *am* a huge fan. His Renaissance Tarot was my first tarot deck and I still love it--and I'd love to get my hands on his Light and Shadow Deck, but so far all I've been able to procure was the book.

Doodle Tuesday is a project within the You Will Rise Project, co-founded by Paul Richmond, the awesome artist who did the cover of my first novel. You Will Rise is all about rising above bullying a subject I'm unfortunately pretty familiar with.

When I was younger, I didn't fit in with my peers. I dressed funny (we didn't have a whole lot of money) and I was being raised by my grandmother (something that was far more unusual in the seventies than it is today, at least in the little slice of suburbia I called home). I was (and still am) an introvert in a world filled with people telling me that being an introvert was Bad. They said I was shy and that was Really Bad. (I'm not shy by the way; a lot of people simply confuse introvertedness with shyness). By the time I got to be a teenager, I fit in even less. And when you don't fit in, you get picked on.

The only "good" thing about my situation was that it was pre-internet. I could come home and leave all of the shit some of my classmates spewed at me behind. These days, kids don't have that luxury. They have Facebook, Tumblr, Instagram, Twitter, email, texts, a million ways to connect to the outside world--and a million ways for bullies to continue to hurt them. My Tarot Project isn't about bullying; the deck is relatively standard (sort of), but as an author and an artist, I bring awareness to things the only way I know how: through my words. So I'm using this platform to a) kick my butt into gear and (far more importantly) b) bring much needed attention to an important issue.
Bullying isn't just kids letting off steam. It's not okay. We're letting bullies kill our children with their words and their cruelty. We're letting bullies grow up into adults who will continue to bully and harass their peers because believe me, it's not just kids who get bullied. This isn't a small problem, or something that only affects "other people." This affects all of us and it has to stop. That happens when we speak up, when we take a stand, when we say "no more." It happens through awareness, education, and compassion.

And most of all, we need to let the victims know that they're not alone. It gets better. There is hope and there is help. In the U.S., you can call the Suicide Prevention Hotline (1 800 8255). You can also visit the American Foundation for Suicide Prevention Website. (http://www.afsp.org).

I've completed five cards this week (obviously not all on Tuesday) as well as writing about 9,000 words in the last seven days. Not enough to meet my daily goal, but still 9000 words closer to the end  :)

First you'll see the original drawings, done with Prismacolor pencils (which are not easy to photograph); following those are the formatted card that will be going to the printer once the deck is completed. The formatted images are what happens when I have too much fun with photo editing software have been digitally altered/enhanced to add special effects and balance the color from my rather lousy photography. (The images going to the printer will be a better res. these are the "almost finished" versions).

All in all, I'm having fun, though (although I'm kinda ready draw some happy cards!) 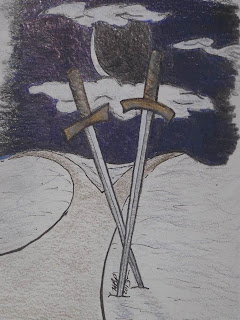 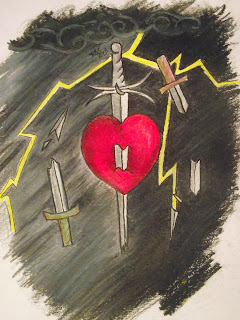 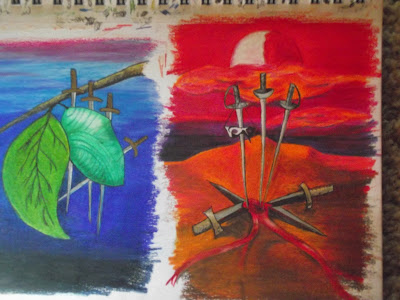 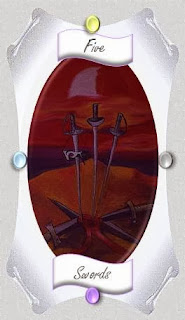 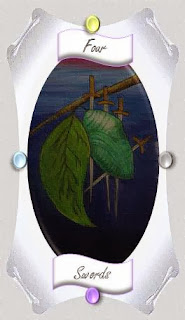 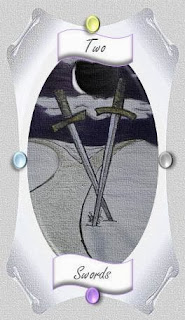 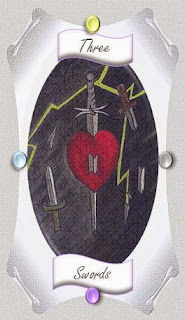 This is absolutely wonderful. As someone who was bullied throughout grade school (and is still a target in some situations), I love this idea. Hugs to you.