Thank you, Helen, for hosting me today! I'm currently in the middle of a blog tour for my novella Homespun, available now from Dreamspinner Press. I'm also giving away a hand-knit scarf (custom knit by me for the winner of the giveaway, in their chosen colors and style) - comment on any of my blog tour posts to be entered to win! There are more details here: http://laylawier.wordpress.com/2013/09/09/scarf-giveaway/
When I was scheduling stops on my blog tour, I was delighted to find out you were celebrating Bi Pride this month on your blog. One-half of the main pairing in Homespun, Owen, is a bisexual man currently in a relationship with a guy. His first important relationship was with his wife Nancy, who died twenty years ago, leaving him with a young daughter. His second important relationship is with his lover Kerry, and that's the one the book is about.
But that doesn't mean that he didn't love Nancy. He'll never really stop loving her, and Kerry has to struggle with his own jealousy of a woman twenty years gone.
I didn't set out to write a bisexual protagonist. It simply happened organically as I worked on the story. For plot reasons I needed Owen to have been married before, but I could have gone many ways with it. Owen lives in a conservative small town, so I could easily have written a version of him who married Nancy from social pressure or confusion, and only later realized that he was gay. I thought about it, in fact. And I do think that Owen's overall sexuality leans more gay than straight.
But his relationship with Nancy was real, and meaningful, and important -- in point of fact, as real and important as his relationship with Kerry. A person can have more than one great love in their life. And sexuality is a huge, complicated gray area rather than a neat, clean line between straight and gay. You can't force yourself to be something you're not, but what you are ... ah, that's a complex and baffling thing, isn't it? A lot of people fit neatly into a box with a tidy sexuality label -- but a lot of people don't.
I am functionally straight, so I can't speak authoritatively on the experience of bisexuality, nor can I (or should I) talk about boundary policing in queer spaces. I am an outside observer and I can't claim authority in those areas. Instead I would prefer to stand back and listen, so as not to drown out the voices of people with actual, lived experience.
But I do know that I want my characters to reflect the full, wide range of human sexuality. In Homespun, Kerry is gay, and has always known he's gay. Obviously this doesn't make his life uncomplicated -- his life is complicated in all kinds of ways. But in that area, at least, he doesn't have doubts.
With Owen, it's less cut and dried. I never really get into too much depth with Owen's sexuality in the novella. It's not really within the scope of the plot, particularly since, in the time frame of the novella, most of Owen's soul-searching on this topic took place years ago (and some has yet to happen, I think, because of the events in Homespun, though I can't talk about that without spoilers!). If I write more with these characters, I think I'd like to explore that aspect of Owen's character a bit more, but in the actual canon -- which is to say, the novella -- it's basically settled.
But it's settled in favor of bisexuality. Owen is not gay; he's not straight. He's bi. And I wouldn't want to write him any other way. 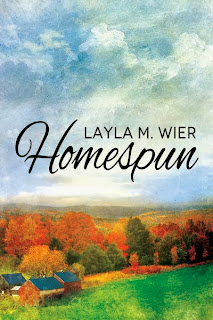 Thank you for having me, Helen! And thanks for the heads-up about the review too. :)

So many authors and readers think just because an MC is in a relationship with a man he has to be gay, despite past with women, even if he says he's bi. It doesn't always have to be that way! Glad you leave him as is…