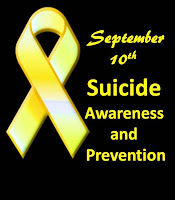 If you're here for the Suicide Prevention Blog Hop, please look here. (Or you can just scroll down to the next post).  Suicide affects all communities, but it hits the LGBTQ community (especially our young people) harder than most. The best thing to do to prevent suicide is to be aware of the needs of those around you--to listen, to learn, and be compassionate.

When most people meet me, they don't realize I'm bisexual. I'm often in my husband's company and even if I'm not, I tend to talk about him and my teenaged daughter, so to most people, I look like a perfectly "ordinary"--i.e. straight--suburban housewife. (And yes, I take a certain perverse pleasure in breaking that illusion by mentioning what I actually do for a living: I write gay romance. Believe me, I'm much better at writing than I've ever been at keeping house! I don't know what I have more of in my life, plot bunnies or dust bunnies!) 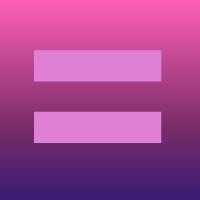 Being married to a man doesn't make me any less attracted to women--and other men for that matter. I'm human. Even my grandmother used to say that anyone who claims they don't look is lying. You don't put on a pair of blinders when you get married, you simply decide to act like an adult and keep your marriage vows-- or have an honest open or poly relationship in which all parties know and are cool with what's going on. And yes, if we could ever find a woman willing to put up with both of our shit, my husband and I would love to add a third partner to our marriage. But until we can meet a woman we both want to date, I'm not dating anyone. Like I said, being married means honoring your vows and your commitment and being bisexual does *not* mean I'm incapable of doing so. It just means my husband and I get to go girl watching together!
Not all of the men I've dated have been so accepting (not all of the women I've date have, either). Some people honestly believe that just because a person is attracted to both genders (or really all genders, because I can and have been just as attracted to transgendered individuals and I am absolutely enamored of androgynous beauties like Tilda Swinton.)
But I digress  ;-)  (Hey, it was Tilda Swinton!)
There are a lot of people who don't understand that being bisexual (or pansexual) does not imply an inability to forge a long-lasting committed relationship. 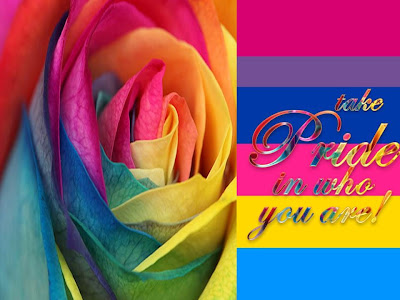 The ability or inability to commit are human traits and have nothing to do with who I'm attracted to--because it is one thing to be attracted to someone and quite another to act on it. I value my relationship with my husband far too much to ever put it at risk over something as flimsy as a passing fancy.
I think this belief is at the heart of the bias against bisexuals and pansexuals. We get told we're "on the fence" or "can't make up our minds." (And believe me, there is *still* a bias against bisexuals in some circles. Browse the relationship ads sometime, you'll find people who still state "no bi's".) Relationships are based on trust--and if some guy couldn't trust me not to run off with a woman, he wouldn't be worth my time, anyway.
I'd love to hear your stories or your insights. Feel free to leave a comment below--and don't forget to check out the Suicide Prevention Blog Hop, one post down.
...............................................................
I  know people read my blog, but it's very sad to only have a few followers (although I love you all and thank you so much for following me!) So I'm asking very sweetly for folks to consider a) following my blog b) subscribing to my newsletter, or c) both.
Subscribing to my newsletter has the added bonus of being eligible for random giveaways throughout the year. I don't spam and you won't get junk in either your snail or email and I promise I will never, EVER give your contact info to anyone.
To follow my blog, scroll down on the right; just under the pic of yours truly is a list of my followers.  All you have to do is press the "Join this Site" button  :)  (I think you have to be a registered Blogger user or some such, so if you're not no worries. There's still my newsletter.)

I think it's awesome that there's a bisexual pride month. I never knew that. The more I read, the more I see the awareness being spread that bisexuality (or pansexuality) is a very real, very valid state of being. It's frustrating that there persists this "one way or the other" mentality (not to mention the "one way and NOT the other" from the most judgmental). Yes, I think there will always be people making assumptions and judgements (hello, human race here), but I hope that more and more people's minds will be opened to the fact that sexuality encompasses more than one or two or three narrow definitions. Luckily, for as many asshats that are out there, there are just as many uneducated people with a willingness to learn or understand. I think that's one of the best things about fiction, it gives a voice to those stories and gives readers a safe place to explore possibilities and grow.