Why Bi Pride? Don't we already have a Gay Pride Day and an LGBT Pride Month? Aren't there celebrations enough?
Yes.
And no.
"Yes", we do get to celebrate LGBT Pride, and many of us participate in Gay Pride events to support our community, but most people at Pride events assume I'm straight, because I show up with my husband. Most people assume that guys who show up are gay, or possibly straight allies, depending on the gender of their companions.

And "no," not only because of that, but because even now, there are a lot of misunderstandings about what it means to be bisexual.
Even in this day and age, there are people on both sides of the proverbial fence who seem to think that we're straddling it and should make up our minds--people both gay and straight who want bisexuals to "choose" to be either gay or straight, as if anyone has a choice. I don't choose to be romantically and sexually attracted to both men and women (and honestly, everything in between as well), but I DO accept it. This is who I am and I've had a long time to get comfortable in my own skin.

I'm glad to know I'm not alone. Bisexual Options is a great online resource for information, and just generally feeling like you're not alone out in the world. Of course I'm lucky, I've met and become acquainted with a number of bisexual people in my life--and I'm really lucky in that pretty much everyone in my life accepts me as I am (although I have to be honest, that isn't entirely luck. If someone can't take me as I am, I'm more than happy to politely move along and save us both the time and trouble of an unhappy "friendship.")
The biggest thing someone has to accept about me...well, there are two things. Number One is that I'm in a committed, happy marriage. Being bi doesn't mean being unfaithful to the person you're with just because you happen to like people of other genders. It doesn't mean an inability to commit. Now, yes, my husband and I are open to the possibility of a third person in our relationship, but that's because we're both a little poly and *not* because I'm bisexual. We're also at points in our lives where we wouldn't actually date someone who didn't want to date both of us or who wasn't looking for roughly the same things we were (a genuine full-time relationship with an eye toward marriage, even if it isn't the legal kind). Sure, when I was younger I happily dated both men and women who had no intentions of going that extra step (marriage), but I think that's true of most 20-somethings. (Everyone I went out with knew I was playing the field and that I was dating both men and women).
So, Number One: I'm not going to cheat on my husband. Don't look at my Facebook Profile and try chatting me up. (Something only men seem to make the mistake of doing...not stereotyping, just sayin'...)  And for the love of god, don't go up to any bisexual woman and ask her if she and her girlfriend want to join you in bed. That is a very good way to get slapped into next week! (I dumped several guys in the middle of the first date for making that mistake. Well, first I gave the guy an earful, then I walked out of the restaurant.)
Number Two: I didn't choose this. Like I said, I accept it, and me, but I did not choose the extra hassle of being attracted to men and women. I did not wake up one morning and think, gee, I'd just love to get heaps of bullshit from both the gay and straight community over my sexual orientation. 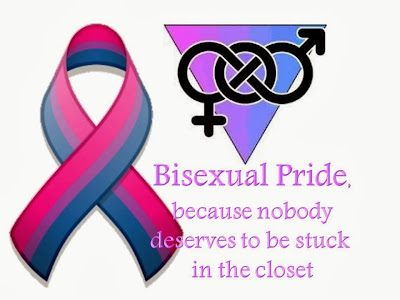 No one does.
So why don't I just quietly sit in the closet, let people assume I'm straight because I married a guy? Is it just because hubby and I would date a woman we were serious about?
No.
Absolutely not.
If I was with a completely monogamous man, I would still be an out and proud bisexual woman, because I simply do not believe in closets. (Just ask the hubby, who tripped over the laundry basket this morning on his way out the door!) Seriously. Closets are for clothing, not people. I will not sit quietly in the closet, even when it makes my life easier. (Bear in mind, I'm a 44 year old woman who has very accepting in-laws! Mom and Dad's advice when we talked to them about a lady we were interested in was to, politely, as if perhaps she was a little less domestically challenged than I am  ;-)  I seriously have the world's coolest in-laws).
But the bottom line is that I am out and I'm proud and if someone can't deal with that, it's on them, not me. I do it in part because it's in my nature and in part because I know there are a lot of bisexual people who can't be out. I'll stand up and be a voice for bisexual awareness in the hopes that someday no one will have to hide in the closet for fear of losing their job, their family...their freedom or their life.
................................................


I  know people read my blog, but it's very sad to only have a few followers (although I love you all and thank you so much for following me!) So I'm asking very sweetly for folks to consider a) following my blog b) subscribing to my newsletter, or c) both.

Subscribing to my newsletter has the added bonus of being eligible for random giveaways throughout the year. I don't spam and you won't get junk in either your snail or email and I promise I will never, EVER give your contact info to anyone.
To follow my blog, scroll down on the right; just under the pic of yours truly is a list of my followers.  All you have to do is press the "Join this Site" button  :)  (I think you have to be a registered Blogger user or some such, so if you're not no worries. There's still my newsletter.)
Posted by H.B. Pattskyn at 8:02 AM