It's been a heck of a week. I've been elbow deep in edits on Pasha and Daniel (Hanging by the Moment). But I'm pleased to say that my first round of edits are in, despite some really rocky moments.
Part of the problem was that I just kept feeling like my editor didn't "get me"; now that may have been my fragile writer's ego (my husband tells me it's pretty fragile all right!) And it may have been that we just didn't "click". Whatever the issue, it made it really hard for me to trust her when she said things like "you're right, maybe you do have too many characters running around the beginning, maybe you should cut a few." Yikes! That's like....murder!!
Only in the end, my wonderful senior editor convinced me (without really convincing me) that sometimes the most painful cuts are the ones a story needs most. (All she actually did was relate how she'd had a hard time following that advice too, but was glad she had.) In the end, instead of cutting a couple of the "background characters" (i.e., the proverbial old guys playing checkers over a barrel in the General Store), I cut what I thought was a pivotal character in Pasha's life. By cutting her, I eliminated a bunch of bulky backstory and streamlined several scenes. Some of her "part" was absorbed by one of the background characters, but most of her part in the story was absorbed by Amy, Pasha's co-worker and probably his best friend (that's one of the things that develops during the story).
All of this has put me hopelessly behind in my WIP.
And my blog.
I'd wanted to come home on from the Counting Crows / Wallflowers concert on the Fourth of July and tell y'all about the wonderful time we had (and we did!) My husband and I were there to work the AIDS Partnership Michigan table, at the invitation of the Grey Bird Foundation. I had an awesome time and got to meet some wonderful folks from Care House in Oakland County. They do absolutely amazing work.
And as a result of generally running late this month, my newsletter will be at least a week late, too.... sigh.
But I have some exiting, if utterly trivial, news: I'm getting a haircut today (and I do mean CUT).
So take a last look at the long hair: here's me at the APM table at Meadowbrook Music Festival, all set up before the Counting Crows concert. 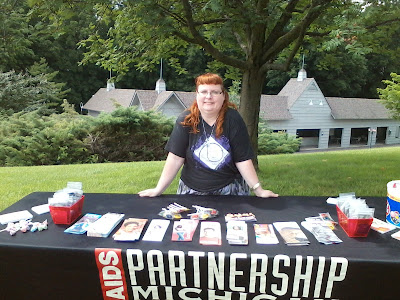 Major kudos for making such major cuts and making your book all the better for it! No worries about being behind on other endeavors because of it, what's important is you've been productive! And bye bye, pretty long hair!

Thanks, Sara! I so wish I could have gotten my hair to the length I wanted it, but genetics just aren't on my side. Sigh.