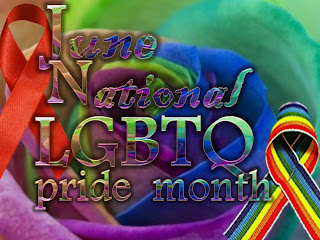 June was officially been declared as National LGBTQ Pride Month by President Obama on May 31. Most people I know couldn't be happier. But as I started to collect my thoughts to write about something today, I remembered a young man (in his 20's, so young compared to me) who used to live with us. He had nothing but derision for the notion of LGBTQ Pride and history. Gay history he said, had nothing do with him, even though he himself was (is) a gay man. I was flabbergasted; we went round and round about it on numerous occasions (during which I had to remind him that I'm a bisexual woman, so yes, LGBTQ history *does* concner me on a personal and not just moral levle. Like many people, this particular young man seemed to keep forgetting that even though I married a man I like girls too.)
It saddened me that anyone could be so willfully and stubbornly ignorant of history; it wasn't just that he'd never heard of Stonewall, when my husband (a straight man) and I tried to tell him why cared about it, he told us he didn't *want* to know. He simply didn't care. (His words, not mine).
I don't know if that attitude was the product of being young (there were many things I was passionate about when I was in my 20's, although those things have changed over time), or if it has to do with growing up in a time and place where it's easy to take things like equality for granted. Although Michigan has a constitutional ban on gay marriage, the area in which we live is pretty liberal. It's easy to forget that a hundred miles north (or even west) and you're likely to see a lot of lawn sighs urging for voters to support the ultra conservative Right. (On the bright side, I just read an artical in the Oakland Press suggesting that that may be changing soon. There's pressure being put on Micigan lawmakers to overturn the 2004 ban on same sex marriage--huzzah!!!)
Still, it's easy to take freedom for granted when you live in a part of the country where it's easy to feel free to walk down the stree holding hands with your same sex partner--when you live in a country where you're free to attend a Pride event (despite the best efforts of a small handful of people who are doing their best to give their entire religion a bad name). It's easy to take freedom for granted when you don't live in a place like Uganda where they keep trying to introduce the death penalty for homosexuality or even slightly more civilized places like Russia where the ban is simply on "gay propaganda" and the penality is imprisonment.
And yet, it wasn't so long ago that the climate wasn't pretty bleak right here in the U.S.
The video below is something I found while I was doing a little digging into history, myself. To be honest, it churns my stomach on lots of levels, but mostly, it illustrates how just 60 years ago, homosexuality was still considered a mental illness. (In fact, it was only removed from the DSM in the mid seventies...and while I was double checking my dates, I discovered that there are *still* people who want to see that decision reversed.)
Here's that PSA from the 50's
Here's something else worth watching
http://www.thelavenderscare.com/