LOL -- okay so when I decided to write about sex this morning, this was the first song that popped into my head. I'd totally forgotten how fun (okay and a little silly) the video was. Hey. It was the eighties!
A comment on my last post got me thinking (hardly for the first time) about "how much sex" to put on the page. My friend Grace Duncan has caught some flack for the amount of on-page sex in her book Choices. Personally, I didn't mind because there was so much more to the sex scenes than inserting tab A into slot B. I'm not just talking good descriptions, I'm talking good story. You just had to read between the sheets to get it  ;-)
My second novel (Bound) can certainly be summed up with: and they had a lot of sex (at least for the first half of the book). But the one I have coming out in Sept/Oct not so much. There are only three or four sex scenes, one not between the two MC's (it happens before they get together--in fact Pasha is convinced that he's never going to see Daniel again because he gave Daniel a rather cruel brush off, although thankfully for Pasha's sake, Daniel is more patient than that and decides to give Pasha another shot). My current WIP will probably fall somewhere in the middle; the boys meet at a bar and go home together for the sole purpose of a one night stand, but, well....  ;-)
Most of the m/m books I read average...hmmm.... five, maybe six good sex scenes per 70,000-90,000 word book. Some are more explicit than others but that doesn't matter to me as long as they're well writting (the first time I see a "throbbing turgid member", I'm outa there! Oh, or "his cock wept", which is just as bad as "her cunt wept", which is pretty much why I don't read het! And yes, saddly, I've read books with weeping cocks and weeping cunts and all I think is would somebody please hand those poor little body parts a tissue...) And yet some books have absolutely no sex. A few years ago I read Downtime* by Tamara Allen (aka James Allen) and remember being struck by how chaste the romance was (although I don't count that as a bad thing!)
So what are your thougts about sex in romance? How much is too much? How much is not enough?
For me the "how much?" isn't what matters, what matters is what the sex scenes reveals about the characters. I will never quite forget the first few times (or the dead last time) I submitted work to my former critique group. Completely unused to books with on-page sex, several members were gobsmacked that "the story stopped for sex"--and yet when I tried to "tone down" that same book for my mother in law **, I couldn't. Too many important things happened between the sheets. Conversly, if the sex scenes can be cut out without changing the story, they probably should be. (I've found a new crit. group, but haven't attended a meeting yet. I admit it, I'm a little nervous.)
And I do have to admit that I felt kind of vindicated when someone asked Elizabeth, Chief Executive in Charge of Everything DSP what kinds of manuscripts she doesn't accept and her third answer was "erotica" even though she said she sometimes gets some very good erotica sent to her. (Top answer: bad ones. Second answer: stuff we don't publish. Apparently there really are people who don't bother reading the submission guidelines or even pay much attention to the publisher's web page.)
And speaking of DSP. I'm pretty sure my books will be in the last sale of the month (I was first pubbed with them in 2011), but this is an AWESOME opportunity to buy some amazing books from your other favorite DSP authors (you know I am!) 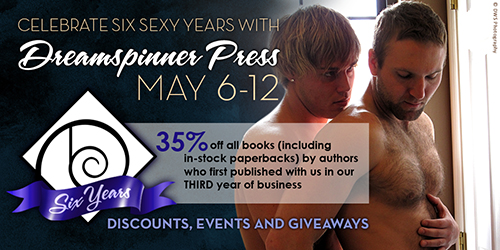 Please leave your comments below (and check back because I almost always respond!)


I want to remind everyone that I'm starting a Newsletter!
So far the plan is simple:
Starting in June, I'll be sending out a short monthly newsletter with fun stuff, updates, contest announcements, etc.
I want to thank everyone who has signed up already
and ask anyone who might be interested to give it a try!


*Downtime seems to have been reissued through Amazon Digital Services and/or Hunna Punna Press (there are two listings for it in Amazon; different covers, same book) and it appears to be much longer than before. At least one review dings it for too much sex. *scratches head*. On the upside, if you're as curious as I am, you get it for free (Amazon's/the author's asking price: $0).
**My husband told me that Mom wanted to read it, but she'd prefer the PG version. I was a little surprised, that didn't sound like Mom, but okay, I love my mother in law. I worked very hard and managed to get it down to a mild R (rather than NC 17). I called Mom to let her know and apologize for not being able to make it any more mild, but there were just too many important things happening in the sex scenes that the best I could do was take out some of the descriptions and change a few words (cock became penis, etc). Mom paused and asked me why in the world had I done that?! She wanted to read it as is. "But your son said..." "My son doesn't know what he's talking about. Just give me the book the way you wrote it."  I LOVE my mother in law! (Hubby just didn't feel comfortable his mother was reading an R / NC 17 rated book. He's actually totally supportive). ﻿
Posted by H.B. Pattskyn at 9:36 AM