Regular readers know that once upon a time not so long ago, I had a dog called Mulberry. We lost him to liver cancer back in December—and my husband (who doesn’t like dogs) went online and found another rescue xolo who we adopted a few days before Christmas. We miss our Mulberry terribly, but we’re very happy to have Jack in our lives. He needed a home and we needed a xolo!

What most people don’t know is that my Mulberry wasn’t named after the actual berry (although it does happen to be my favorite berry); he was named after a television character created by John Easmonde and Bob Larbey named, you guessed it, Mulberry. Mulberry was brought to life by Karl Howman and only ran for two seasons, although a third season was planned—it’s a true shame the it was never filmed, the writers/producers have talked about how it would have ended and it would have been beautiful.

Mulberry is described as a sit-com, but it’s more of dramedy, IMO, and opens with a mysterious man in a long overcoat (Mulberry) arriving at Farnaby Manner to apply for a job that hasn’t been posted yet. Miss Farnaby, a "cantankerous old trout" of a spinster has run off yet another personal assistant, leaving the remaining two servants (Bert and Alice) doubtful that they’ll ever find another—this last one lasted almost an entire fortnight, but only because she’d once been in the army. But, as I said, in comes Mulberry. Congenial, a bit peculiar, and full of warmth, wit, and charm, Mulberry quickly wins over Miss Farnaby and gets the job.


Bert and Alice (who have lived at the manor since they were children and grew up with the Farnaby sisters) are suspicious of Mublerry from the beginning. And well they should be. 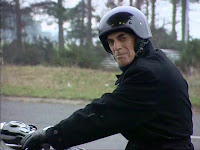 Starting with the first episode, we see another mysterious man who only comes around to talk to Mulberry when no one else is around. This dark and scary looking stranger makes it perfectly clear that Mulberry is there to do one job and one job only: Miss Farnaby is supposed to die.


But all is not as it seems.


As the stranger makes clear in episode five that "I am not a gangland mobster and you are not my hitman. I am death and you are my son."
I think my favorite episode is "The Accident", in which Mulberry takes a tumble off a cliff while flying a kite with Miss Farnaby. He is presumed dead and carried off to the morgue, where Death comes to shake his head and tisk. After all, the son of Death can’t actually die! *g*. Mulberry’s return to Farnaby Manor causes quite a stir and leads to one of the sweetest moments of the show, when Miss Farnaby asks Mulberry what dying was like (they all assume he died, if only for a few moments, and was then revived by natural means.) Mulberry smiles at her and says death is nothing to be afraid of, that it’s quite peaceful, and feels like you’re just lying there, waiting for somebody to come and take you somewhere. Miss Farnaby wonders what sort of somebody will come for her when it’s her time; Mulberry speculates that it will be someone who liked her. And of course the audience is in on it, we all know that that somebody will be Mulberry himself, which is how the series was supposed to have ended—but alas, we never got the last season. 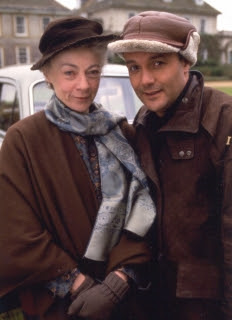 Just stopping by from the a-z challenge. Jack sounds very lucky to have found such a loving home. :) I love that your husband found him, despite not liking dogs.

Have fun with the rest of the challenge.

Thank you Jessica! He's an awesome dog (and I've got a pretty awesome husband, too :)

If anyone is wondering about that "deleted" comment, it was spam. I *will* remove all spam comments to my site cheerfully and without remorse.

But huge thanks to all the real people who stop by!!