It might not start with "I", but today is National Youth HIV and  AIDS Awareness Day. The number of young people (and adults for that matter) living with HIV is staggering. And it's so totally preventable. If you can't do anything else, at least be aware that the problem exists--and that with awareness, understanding, and compassion, we *can* stop HIV/AIDS in its tracks. (http://www.advocatesforyouth.org/nyhaad-home)
Now, onto the Letter I and Introverts....
The people who see me teach a class or participate in a panel discussion at a convention, people who wander up to my table in the dealer’s room to chat—people who I engage with at the grocery store—probably don’t realize that I’m an introvert, because most people confuse shy (a behavior) with being introverted (something that's hardwired into our brains). Not all introverts are shy and not all shy people are introverts (yes, believe it or not, it is possible to be a shy extrovert).

So what exactly is an introvert (and an extrovert for that matter?) 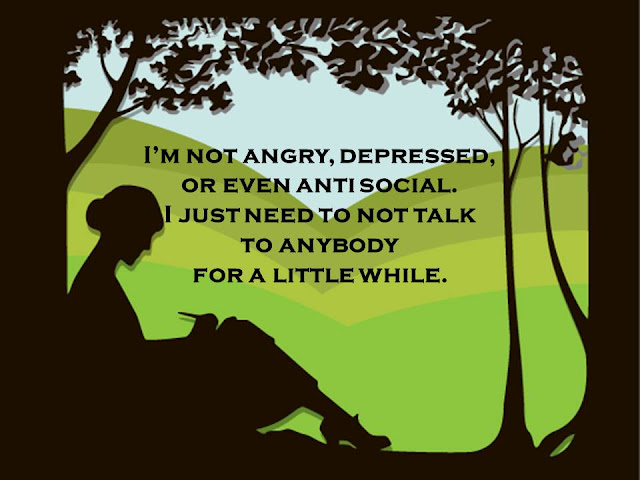 See, for years, I’d been told by everyone, friends, family, teachers, co-workers, that that Introvert = Bad. (That's a very common misconception in American society and has in fact lead to a great deal of stress being placed on introverts--I had a total stranger tell me once that by saying that I was an introvert, I was clearly NOT putting my best foot forward and little wonder I had no friends.) Further compounding my personal struggles, I’d been told for years by my family and even some friends that because I would rather quietly assess a situation before plunging in feet first, that I’m shy and that is also bad. Now, I'm not shy, but if you hear something long enough, you start to internalize it, so I had this strange double whammy working against me: I need time to myself, and I assumed that because I prefer to carefully assess a situation before jumping in that I must be shy and being shy is a Bad Thing. (It isn't, but it can be a difficult thing).
So I pushed myself to get out and be with people and spent years not giving myself permission to take time to be by myself. Sometimes I had no choice but to go off on my own and take a walk or putter in my garden, but these hours of blissful solitude were always followed by massive bouts of guilt over having selfishly taken “me time”. As a result, I spent a lot of time miserable and angry. I was tired and cranky and I didn’t know what was wrong with me, why I couldn’t just be happy like everybody else, until the day I took a Myers Briggs test as part of a classroom exercise. I started out answering the questions with what I “would do”—then half way through I realized that even though those were the things I would do in a given situation, they weren’t the things I would want to do. I started over and answered honestly. The next class session was spent with our teacher going over what it meant to be an extrovert or an introvert, as well as the other parts of the test of course, but that “I” was the magic letter for me. Being an introvert was nothing to be ashamed of, nothing to hide from, and nothing we could even change, so rather than try, we should embrace it and work with it—work with inherent natures, rather than against them. Wow.


Making that discovery and allowing myself to simply be who I am without guilt and that was a very important step toward making my life a whole lot happier.

For anyone interested in taking a free version of the Myers Briggs test online, here are a few sites that offer it. The best results will obviously be garnered from taking the test with a human being to help you understand the results, but the free versions can give you some pretty awesome insight. 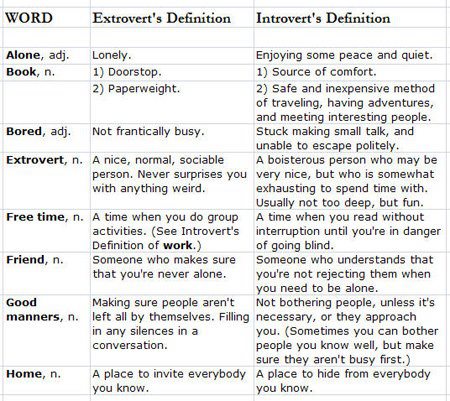 I don't totally agree with every single one of the above (becuase it was pretty obviously written by an introvert), but a couple of them really hit home. "Good Manners", "Friends", "Free Time", "Home", and "Bored" I think are the most dead on accurate. (Although typically extroverts really don't surprise you with anything weird, where as an introvert just might...you never quite know what we're thinking, do you?  ;-)
THIS is one of the best articles I've about introverted vs. extrovert that read in a long time.﻿