You may not think we need another awareness day for HIV and AIDS, but almost 40% of new HIV cases occur in young men and women between the ages of 13 and 29, and only 23% of sexually active high school aged kids have been tested for HIV. Those are staggering numbers. I don't know if more kids are getting infected because schools aren't teaching safe sex as rigorously as they did when I was in school or if kids have bought into the idea that HIV is no big deal, or if maybe they just think "it can never happen to me". But it can. And it is. And it needs to be stopped.
Here are some resources to learn more: 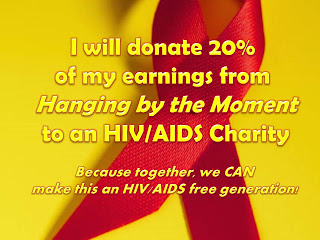 If you're like me, you look at facts and figures like this and wonder "what can I do? it seems so overwhelming!" You can do what I'm doing: write a blog post. Maybe not today, but next month, when the mad A-Z hop is over. You can wear a ribbon. You can talk to your kids and grand kids, not just about safer sex and preventing the spread of HIV, but about accepting those who have it with compassion and understanding and ending the stigma.

You can give somebody a hug.

You're right; it's shocking how many people are still contracting HIV, and still thinking 'it can't happen to me'.

I'm from the UK; the nation famed for being repressive and embarrassed about sex.

Kids are getting much more sex advice from their friends rather than proper sources, and so all the old myths - you can't get pregnant first time, only gay people get AIDS - are being passed from generation to generation.

Education is good, but it needs to be brought out from behind closed doors. We need to shout it, not whisper it behind our hands.
coffintreehill.tumblr.com

"Education is good, but it needs to be brought out from behind closed doors. We need to shout it, not whisper it behind our hands."

Very interesting post. I'm only a couple of years younger than you and like you I remember the not quite s early days of AIDS and HIV, through media mostly. Of all the news paper headlines I read as a kid it's those about AIDS that made an impression; the death estimations from the 80's have luckily been proven wrong, thanks to modern medicine. Today the subject no longer makes big scary headlines, and even in Sweden, where I'm from, its just one of many STI:s that's mentioned in sex ed, and where the strategy in the 80's (my school years) clearly was to scare young people into using condoms, school and textbooks today seem to treat it more like any other STI, pointing out that it is no longer a death sentence. But like you said, no one tells you just how life altering the medicines are, and no one ever talks about the risk of the virus mutating or strains of the virus becoming resistant to the treatments.

I'd like to add that the latex condoms must be used with water or silicone based lubrication, not oil/fat based, and condoms used with too little lubrication, natural or artificial, puts a higher strain to the material. Every time I read about characters using condoms with lotions and massage oil or something like that I silently cringe. If you read something enough times you may end up believing its true and okay.

Also, I'd love to read about Daniel and Pasha. Where and when will it be available?

Great point about water based lubricants only and how if readers read something enough times there's the very real chance they'll start to believe it's true/okay. That's one of the major reasons I feel so strongly about characters in romance novels using condoms--or at least discussing the reasons they're not going to, panicking if they screw up, etc. Just like in real life, there should be consequences in fiction.

I'm hoping Pasha and Daniel's story will be contracted soon. It's been under consideration *forever* (in real time less than two months, but it feels like forever at this point.)

Please check back; I'll be updating theHanging by the Moment page (tab up top) as I get more information on publication.