Everybody knows that the Giant Panda and the Polar Bear are endangered; everyone knows the plight of the Humpback Whale.
But how many of you have ever heard of or seen a Baiji? If you haven't, you never will, except in pictures. The Baiji was declared "functionally extinct" in 2007. What that means is that if there are any left their numbers are too few to sustain the species for more than this or possibly the next generation at most. None have been seen since 2006; prior to that, only 13 individuals had been spotted.

So what is a Baiji? They are...or were...one of four species of river dolphin in the world. The other three species aren't doing so well, either.

The Baiji died strictly because of human neglect. For years, scientists warned the Chinese 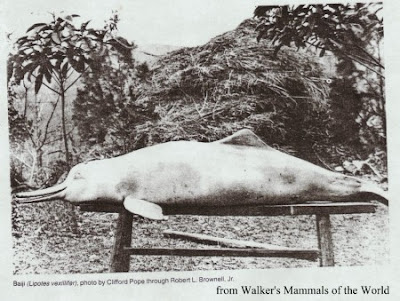 government that the dolphins--who are revered as river gods in Chinse culture--were dying out because of polution, over fishing (competition with humans over their food source), and too much river traffic. A refuge was proposed that wouldn't interfere with human needs...but the goverment never quite got around to acting on the suggestion.
Now, of course, it's too late, at least for the lovely Baiji. If people act, there may still be hope for her cousins in South America and other parts of Asia. I wrote a short story about the Amazon River Dolphin, the Boto; you can find it here. It's an m/m romance, but it's pretty PG rated.)
For a video of the river dolphin, click here.


Not far behind on the Baiji on its way to extinction is the Yangtze Finless Porpoise (warning, there are some pretty disturbing photos of dead propoises on that site). 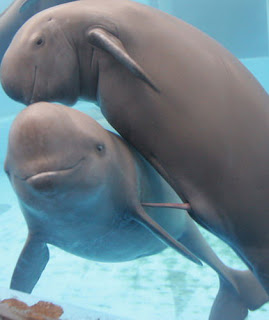 These guys are dying out for exactly the same reason the Baiji died--and it's preventable, but only if we actually DO something to prevent it.

One of the major threats to the "river pig", as they are sometimes called, is mercury, which is being dumped into the river (and let's face it, that isn't good for anybody living in or around the Yangtze River!) Here's an artical with less disturbing imges...but extremely disturbing facts.

But one of the "problems" with EDGE animals is that they're not all cute or cuddly like the Panda Bear and as a result they are often overlooked. For many, there is little to no conservation effort at all, in part because they just don't make good poster children--and in part because they occupy such a specializied and tiny niche to begin with, that nobody has even heard of them. 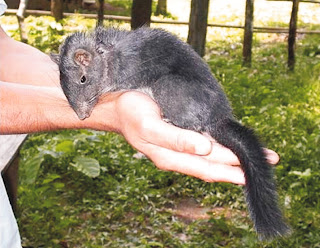 Okay, I find the Kha-nyou to be kind of cute and cuddly, but I may be in the minority ;-)  "Discovered" in 2005** (no, that is not a typo), these little guys may well be the only members of an ancient group of rodents to still exist. Between being hunted and having their habitat destroyed by logging, they may not be around much longer.

** 2005 is when they were first catalogued or described by scientists; locals knew they existed. 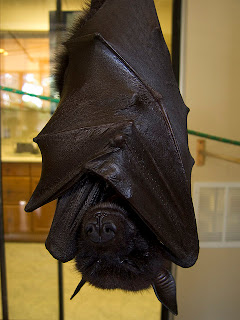 For some reason, a lot of people are just as
squicky about bats as they are about rodents, although that isn't the real reason the Fruit Bat is endangered (critically so). It's the same story: hunting and habitat destruction. Here's a page featuring several of Australia's endanger species.

And here's a pop quiz (don't worry, nobody will be graded!)

Anyone know what a thylacine was?

The last thylacine died out in the 1930's, in a zoo, after having been hunted to death in New Zealand, it's only natural habitat. There are persistant rumors of sightings on the Australian mainland--and there was even an effort to clone a thylacine from preserved DNA--but so far the sightings are up there with Bigfoot sightings (interesting but unsubstantiated) and the cloning effort failed. Thylacines were hunted to death in much the same way and for much the sam reason that coyotes and wolves are being hunted in the U.S.--cattle and sheep farmers blamed them for herd loss and sought permission from the New Zealand government to shoot on sight. Permission granted--and even encouragaged as money was paid by the government for the pelts. 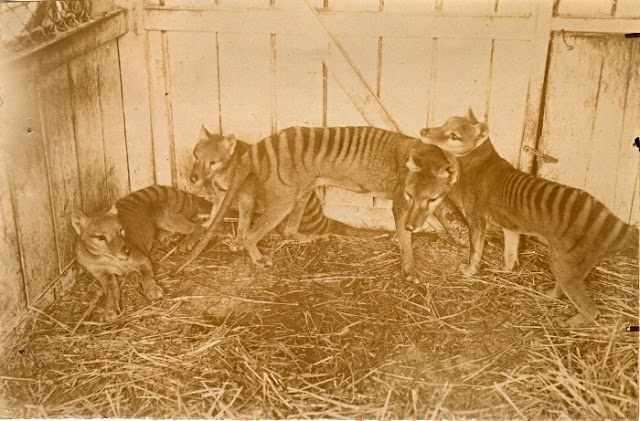 Called alternately a "tiger" or a "wolf", thylacines were neither, but rather a species of marsupial.

There are countless other animals on the endangered and critically endangered species list; some get a lot of attention in terms of conservation effort. Some get none.

If we as humans don't act to protect and preserve our cousins by preserving their habitat and protecting their right to exist, we'll loose even more of them.

By the way, for the sake of time and space, I only chose to highlight mammals here today; there are countless endangered birds, amphibians, reptiles, and fish on the planet as well. Most of them make even less attractive poster children for the cause than the fruit bat.

It is truly a shame that the human race has destroyed so much of nature. Last night I was watching a huge condor feeding her young, so dainty and delicate, and it was precious. Humans have to buy books, run to others to find out how to do this and that with theirs, and then complain about much of it. I don't understand. I often wonder if our brains are not at the bottom of the chain! I will bet since your a seasoned writer, you could do something with that!! Very interesting post, and I enjoyed it very much. Thank you!! www.sandysanderellasmusings.blogspot.com and if I can join your blog I am joining!!

Such adorable and beautiful creatures (even the ones that some people would consider ugly...) We have a LOT of work to do. And we're not doing it. Well, more like we're doing the exact opposite things from what we should...

Thank you for sharing, some of these species are new to me.

I'm working on a collection of short stories in the hopes of bringing some awareness. Sometimes I feels so helpless because I'm just one person and there's so much to do, but then I remind myself that if just one person learns that animals like this exist--or existed--then I've made a difference, because education is half the battle.

Of course when I do get the collection finished and published, everything I earn from it will going to EDGE of Existance. I think it's an awesome organization.