D is also for "delays" -- I didn't get to finishing this last night and woke up with a screaching migraine... so. Here we go, hopefully better late than never  :) 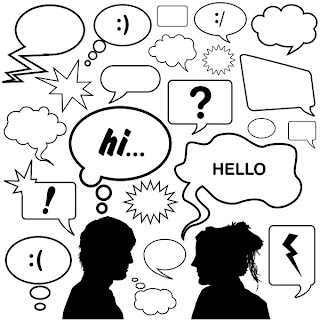 I don't talk like you and you don't talk like me. Don't believe me? Spend a couple of hours sitting in a mall or some other public place and just listen to different people talking. (That is, in fact, one of the best exercises I can think of for learning how to write good dialoge. Writers should be some of the very best listeners around.)
But let's step back for a second and talk about what dialogue really is. Simply put, it's two or more people talking (and the more people you have talking--the more in the scene, period--the more complicated it becomes). It is an exchange of ideas, it's a way for your character to get what he or she wants. (Every character in every scene wants something, whether it's to find out who-dun-it?, to win the heart of the boy/girl, or simply to get a glass of water. Tension comes when there are obsticals in the way of attaining that goal.) What people (characters) say and how they say it can (should) reveal quite a lot about them. How does a man refer to his wife? His mother? His children? And just because he calls his kids brats doesn't mean he hates them--if he says it with a smile or a quirk of his lips, it's obvious he means it as a term of endearment and we suddenly know a lot more about him, his kids, and their relationship. In my third novel, Pasha often refers to his father as "the old man"; it's an odd term of endearment, but watching their relationship, readers should pick up on the fact that Pasha loves his dad, he just considers him old fashioned and stuck in the past.
If someone is easy going and laid back, the way the speak will reflect that. If they're impatient and in a hurry, they'll use a lot of clipped sentences. Truly good dialoge requires very few "modifiers" (e.g., she said saddly, he said quickly). Instead of an endless sea of adverbs, try giving visual clues, show your characters' body language with an eye brow quirked upwards, a hint of a smile ghosting across his lips, hands shoved in his pockets, or her shoulders hunched. If it's your POV character, his gut can clench or his heart might race. Maybe he feels as if his blood has turned to ice water.
Dialogue can be used to convey information to the reader--but we have to be careful to a) avoid info dumps and b) avoid "as you know Bob". (E.g., Sam Marshal stared up into the sky, then glanced at his  friend. "As you know, Bob, here on Earth the sky is blue and we have a bright yellow sun." Seriously? No. That information belongs outside the quotation marks. The sky was clear blue and the sun shone brightly down on the two young men. Sam shoved his hands in his pockets and looked over at his best friend; a swarm of butterflies danced in his gut. You find "as you know Bob" statements more in science fiction and fantasy than contemporary writing, but I have seen them there.)
As for info dumps, it's highly unlikely that Bob and Sam are going to sit around telling each other how they met. They might tell someone else (and may even have very different stories to tell), but when it's just the two of them, they're unlikely to recount the story. Think about it. Do you call up your best friend and start out with "Remember when we met....?"
I have actually had that conversation with a friend; she was trying to remember exactly when/where we met, but if our story were a novel, it's a conversation that would never have made the final draft. It did nothing to advance the story, and like every other word in writing, dialogue must advance the plot in some way.

Whether it's giving us a vital clue to the character's personality or motives, adding or resolving tension, or just simply moving the story along, dialogue has to contribute something vital. If it doesn't: 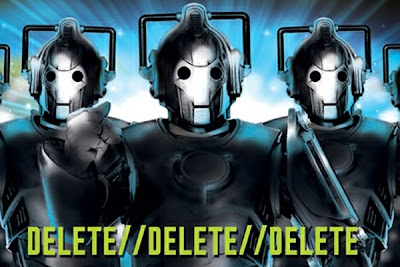 That might sound brutal, but think about this conversation:
About the only thing we learn here is that both Bob and Sam like sushi. So why not just say, Bob and Sam decided to go out for sushi. Simple. Effective. Gets the point across, and hopefully something interesting happens at dinner.
Now if there's some reason that the sushi conversation is interesting, then go for it. E.g.:
Now we know just how much Sam likes Bob.

I'm told I have a good ear for dialogue and tend to write it well--which I take as a huge compliment. I spend a lot of time listening to people when I'm out (sometimes I go to the mall just to sit and eavesdrop on conversations). I also spent a lot of years writing fanfiction, learning how to write pre-existing characters, "people" that audience members already knew and loved--and boy, if you bungle it, fans will let you know! (Anyone who's interested can check out my insane Torchwood crossover series, in which NCIS's Abbey and Tim, and House MD's Robert Chase joined Jack, Ianto, and Gwen, well... yeah. Talk about some very distinctive personalities and speech patterns.) Whether you love fanfiction or hate it, you might want to write a little as an exercise; pick two or three of your favorite characters from different shows and have them sit down for coffee or drinks. It doesn't have to be a story, per se, just have fun and keep the dialogue on track.
As a final note, if there are only two people talking, you don't need dialogue tags after every single sentence, but it can be difficult if you've got a bunch of clipped one liners to figure out who said what. I totally adore Steven Brust, but he did that in Iorich and it drove me a bit to distraction. It went something like this:

This isn't the exact dialogue, but the point is it's so banal there is no way to figure out who's talking. A few dialogue tags would have helped.

Remember: dialogue is what really brings your characters to life in the readers' mind. It's not just talking, it's storytelling and the better you know your characters, the better able you'll be to express them to your audience.