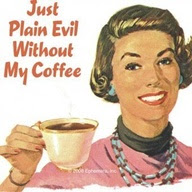 Anyone who knows me even a little bit knows that I've been drinking coffe for...hmmm.... yeah.  A lot of years. I started drinking it regularly in the mornings when I was in the seventh or eight grade and to this day, my day has not properly started without a hot cup of fresh brewed coffee. Honestly, I don't even understand people who don't drink coffee (or at least tea) in the morning, even though I'm married to one. I don't understand it when my husband and I go out to breakfast and he orders a coke with his eggs and hashbrowns. I brew my morning coffee the way most folks do, in a standard coffee maker; it's not fancy, but it's fast and it gets the job done. 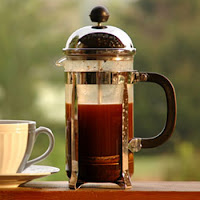 But sometimes on the weekends, or in the evening, when I have time to really enjoy my cuppa joe, I opt for coffee made in a French press (to your left), or better yet, a nice pot of Turkish coffee (to the right and just below). 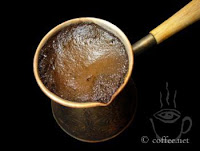 There's just something about the way a French press works that delivers a really good cup of coffee--it reminds me of my aunt Syl's perked coffee (and truly, perked coffee is worlds better than coffee maker coffee, but it takes for freaking *ever*).

Just below and to the left is an old fashioned coffee percolator, just like my aunt used to own. If you've ever been camping you know the drill; water goes in the bottom, coffee grounds go in the basket and then you set it on the stove. As the water heats, it bubbles up through the stem and into the basket and eventually trickles through the little holes infused with coffee goodness; most camp percorlators are metal, but this nice glass one allows you to see the coffee perking, so you'll know when its reached the perfect color/strength. But like I said, it takes forever. A coffee press gives the same rich, steeped flavor without taking so long because you pour the hot water in all at once. After a few minutes (for me it's like six or seven), you press down the stem and pour a perfect cup coffee. 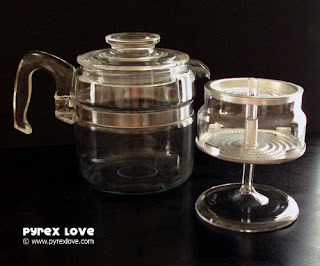 The secret to a good cup of coffee is A) starting out with good quality FRESH coffee beans, B)hot water (between 195 and 200 degrees (F); if the water isn't hot enough, you're guarenteed to get a bittyer, nasty cup of coffee and C) proper measuring. Of course with C there's a little room for personal preferences. I take a fairly strong cup of coffee (or so my husband, who doesn't even drink the stuff, insists), so I may use a little more coffee in my coffee than other folks (I really don't think so!)  And I'll be the first one to admit that my morning coffee is usually just plain ol' Folgers. Yeah. It's cheap, it's easy, but it's got a good flavor, IMO, so it makes me happy enough for a quick cup in the morning to get the day started. 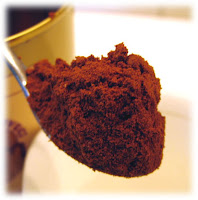 Turkish coffee is really my favorite--but it's one of those things that has to be done right and that means starting out with a good beans (although Folgers will do in a pinch) and grinding them to a fine powder. Think espresso grind or finer. You're going to need an ibrik (also known as a cezve--or as we call it in my house: that funny looking pot Mom uses to make drain clearner...erm coffee! I meant coffee!) Turkish coffee also totally benifits from from a some cardamom seeds (mabye a quarter teaspoon's worth per pot) and a clove or two; other recipes call for cinnamon stick, anise, and / or nutmeg, but I tend to stick to cardamom and clove in mine, because that's the way it was first served to me.)
Measuring is simple: one cup of cold water per heaping teaspoon coffee bean powder (you can get a fancy Turkish hand grinder--they're gorgeous--but I'm lazy, I use an electric grinder). How much you can make at once depends on how big your pot is; contrary to the image up above, you do NOT want to fill it to the brim. That would create a kitchen disaster. Also, most people serve Turkish coffee in a demitasse cup. I don't even OWN any demitasse cups. Total waste of time! I serve it in a teacup, sometimes even a mug (if I have company it's teacups, for myself, it's a mug).  If I'm making it for myself, I add sugar right to the pot; if I have company, I'll leave the sugar off until it's served. Your spices go right in the pot as well. So far it's pretty easy; it's the next part that gets a little involved. 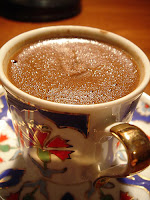 Turkish coffee isn't the sort of thing you throw on the stove and walk away from. Nope. It requires a babysitter. You're going to heat this stuff up on very low heat until it comes to a gentle boil. It's during this boiling process that the froth builds up. When the foam reaches the brim, remove the pot from the stove and give it a gentle stir to bring the foam down--then return it to the stove. Let it foam gently up a second time. Remove, gently stir down and return to the stove. (I told you you have to babysit this stuff!). Let it foam gently up a third time and remove it from the heat and stir it gently down. Return it to the heat one last time and let it foam up to the brim. Yes. You're finally done  ;-)  The next bit simply involves pouring it into the cups so that everybody gets an equal distribution of the frothy, sweet goodness. And yes, likely a fair share of grounds as well. 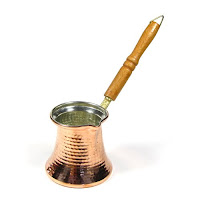 ﻿﻿Turkish coffee pots aren't expensive, by the way. A very nice one can be had from Amazon for about $20. The same with a decent French press. And yes, in my house, we have both as well as a coffee maker, cappuccino machine, and of course a stovetop cappuccino pot, because if you want a really good cup of capp, that's the only way to go! (I really just use the machine becasue I love frothy milky lattes  ;-)

﻿
Now, I'll admit, for my morning joe, I'm perfectly content with Folger's. It's not gourmet, but it's reasonbly priced, readily available, and has a flavor that I enjoy. Darker roasts are typically suggested for Turkish coffee, such as Sumatra (which isn't actually one of my favorites) from Indonesia. Beans from Yemen or Ethiopia make for a great pot of Turkish coffee, IMO--and my local Caribou carries both, and deals only in free trade beans.  (Coffee shops like Caribou and Starbucks are great places to go to sample the "coffee of the day"; it's always going to be something they carry and you'll get the chance to sample different types of beans without committing to a whole bag.) 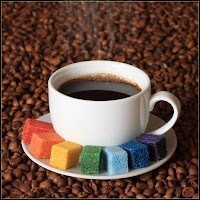 My all time favorite coffee comes from Jamaica; Jamaican Blue Mountain coffee is as smooth as it
gets. It's also one of the most expensivre beans on the market. My second fave is Kona coffee (which is one of the second most expensive beans on the planet) from Hawai'i. Kona is a fairly "light" coffee, but it makes for a great cup in the evening.

The flavor of coffee beans, like the flavor of wine grapes, is influenced by where it grows--what's in the soil, the weather, the climate, all play a part in the final outcome. Click here for more information about different types of coffee beans and their flavor charactaristics.

Want to learn how to make fancy colored and flavored sugar cubes? Check this out! Talk about fun and easy  :) (Not to mention yummy... try rose flavored cubes by steaping some fresh rose petals in the water, or for a very old fashioned flavor, try making lavendar flavored sugar cubes. Lavendar was a favorite amongst the Victorians; it's an acquired taste, but I personally love it.)

Coffee also makes a great rinse for hair (it's great for the hair and scalp) and a wonderful moisturizing splash for your face. I do homemade face masks and scrubs, and often use coffee in the mix (finely ground powder as a gentle scrub, or liquid coffee as part of the mask itself). Coffee is said to stimulte hair growth on the head; I'm not sure whether or not its true, but it's nice as part of a hair mask. Coffee oil is great for making homemade soaps and lotions.

But no matter where it comes from or what you use it for, all coffee starts out looking more or less like this: 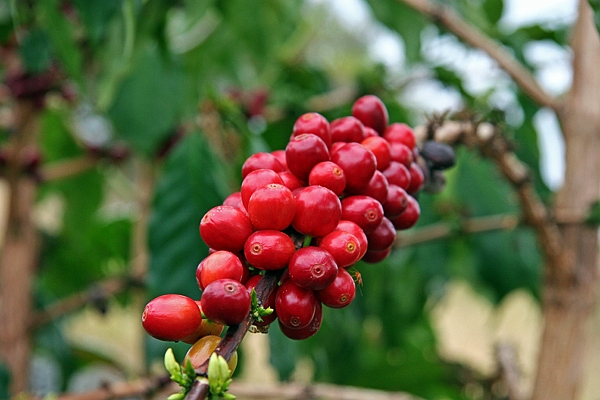 The bean that we (or at least I) know and love is the seed inside those bright red "cherries". The seed comes out of the pod and has to be dried and then roasted before it can be turned into this: 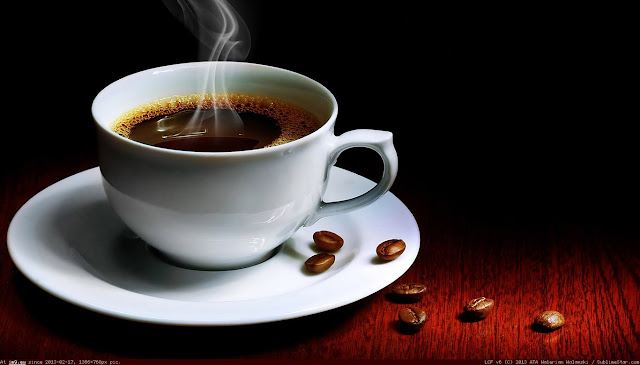 See you tomorrow for Day Four! But gefore you go, have a cuppa joe on the Torchwood Team!  ;-)

Wow, you know a lot about coffee. I'm more of a tea drinker these days. I can't take the caffienated stuff of either (I blame my genes), so I have to be content with decaf.

I love my coffee - fresh ground is best, but I'm not above brewing a fast cup of Folgers when I'm in a rush. I've heard before that Turkish coffee is an acquired taste, but it sounds like something that's worth looking into from your description.
____
Find me:
Blog: http://allysonlindt.com
email: Allyson.Lindt@gmail.com
Twitter: @AllysonLindt

I didn't think I'd like Turkish coffee the first time someone offered it to me (I take a *lot* of milk in my coffee and you really shouldn't put milk/cream in Turkish coffee) but it was just sooooo goood :D