Now, I have to confess, I'm only about half way through with Brute by Kim Fielding, so I can't truly rate it...but assuming the last half of the book is as good as the first half of the book (and I have absolutely no doubt that it will be!), I'd have to rate Brute at a solid 4.85 Stars. 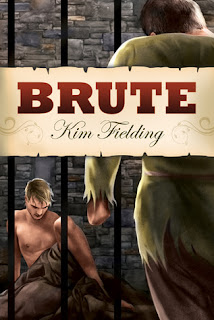 Brute pulled me in from the very first sentence; I started it the day before yesterday because sometimes I'm a little ADD when it comes to reading and if what I'm officially reading doesn't suit my mood (or isn't holding my attention), I'll switch to something else.

After kind of a sucky day at work on Thursday, I just needed something different to read, and I decided on Brute. I was instantly in love, but only had time for a few chapters.

------
Edit/update: I spent the morning reading instead of writing and it did not disapoint! I was right, I needed those tissues!
Posted by H.B. Pattskyn at 6:35 AM