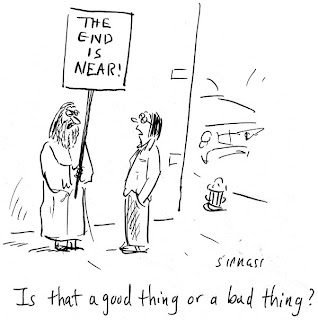 The two most difficult words for me to write when I'm working on a story is "The End" (and here you thought this was going to be some crazy existential discussion about the end of Life, the Universe, and Everything!)
See, the beginning is easy; sometimes I shift it around a little (should I start here or here or here), but there are some good guidelines that most writers follow:
After that, you let important bits of backstory filter in bits and pieces, maintaining the subtle balance between the gentle tease (keeping readers intrigued) while not giving them so little information that they feel lost, AND not landing an info dump on their heads. It's a tightrope walk in which a lot of information never gets into the novel--I can tell you loads more about my characaters than you'll ever read because not every scraped knee or kindergarten crush is important to you, the reader. It may be vital to the character's development as a three dimensional person, but you the reader probably couldn't care less.
But when is the story over?
The easy answer is that it's over at the end, when all the loose ends have been tied up. Except life is never that neat and tidy. There are always things left hanging, things we don't know even though we wish we did. There are things the characters couldn't possibly know about the events of the story.
Several otherwise amazing novels that I've read recently (and no, I won't name names) have been completely ruined by having an overly happy ending where absolutely *everything* works out. To me, this feels very unrealistic; I was completely content that the author pointed us in that direction and would have preferred to let my imagination take over and see the parents finally coming to embrace their gay son rather than been hammered over the head with it in a sappy final chapter/epilogue. I'm smart. I can figure it out for myself. (Now watch, my words are going to come back and bit me in the ass because parential reconciliation is part of my third novel).
The point is, I don't need a bow put on it. Sometimes I wish there was more story, but that's just because I'm not ready to put the book down, I want to read what happens next. I don't need it, but I'm greedy, I want it. I might even crave it, like fancy Godiva chocolate.
I completely understand why some readers grumbled at me over the ending of Bound. It was fairly abrupt, but in my own mind the story was over; anything that happened after that final scene is part of the next chapter in Jason and Henry's lives, it's a new story. Bound is about a young man coming to terms with his submissive nature and finding a mentor who loves him. Did that happen? Yes. Are there still lots of unanswered questions? Also yes. Do I want to explore Jason's training? Hell to the yes!
But see, for me, if I love the story it's never over on the last page. The characters (whehter they are mine or someone else's) continue to "live" and grow and have more adventures.
Which I suppose is what makes finding the end so difficult. 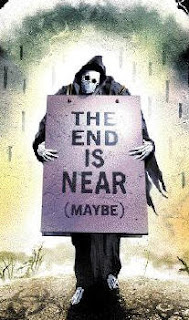 Chapter Two of Jason and Henry will be up on Monday; on Saturday, I'm welcoming returning (and totally awesome) guest blogger Chris T. Kat. Also this month, I have the fabulous Grace Duncan lined up to talk about BDSM (I believe Grace will be here on the 18th).
And just because I'm a little (okay, a lot) crazy, in April, I'll be doing the A-Z Blog Hop/Challenge; in a nutshell, that means I'll be blogging for 26 days in April beginning on April 1st, blogging about something that begins with the letter A. On the second, the blog will be about something that begins with the letter B, and so forth (we get Sundays off for good behavior and to rest our fingers!)  The "somethings" for my blog will cover a wide range of topics, some serious, some silly, some personal, some writing related, some just me scrambling to come up with something to say about a word beginning with the letter X, Y, and Z.
Stay tuned, come back soon, and feel free to leave comments! To a blogger, they're like milk and cookies, they let us know we're loved (or at least read).
The End is...Here!

The End -- I was looking at Rodin sculptures once, and I asked the artist I was with how Rodin knew he was done, because the edges of a lot of his stuff aren't smoothed away, it's just the rock/marble rough edges. And the artist said, "That's what makes an artist, knowing when it's done." Which would explain why my story endings always suck. :D But I know what you mean, sometimes it just goes too far, more detail than you needed at that point. (My peeve is the "everything is settled so let's express our love" sex scene at the end of stories -- it always seems tacked-on and gratuitous, sort of voyeuristic at that point -- no more plot to advance or characterization to show.)

I'm definitely in the category of wrapping it up too well, dumping too much info....but I just like loose ends tied up.

And I liked what you said about "But I do it myself in this book." I think we can't help but become what we criticize, at least once. Or maybe we write what we normally don't like just to break our own rules, for a change or for a challenge?

:) The trick for doing the A-Z blogging is really to get as many of them written and set up ahead of time as possible, just so you don't lose your mind in April :)

I'm also totally with you on that last almost obligatory (seeming) love scene; it always seems like something that's done just because maybe someone thought the readers would expect it.