I spent this last weekend at ConVocation, a Pagan Spirituality convention in SE Michigan. Sales were a bit slow, which is okay, it's not necessarily about the money, it's about networking, establishing new contacts, and reconnecting with old friends and generally having FUN! (My legs and liver seem to think I may have had a little too much fun.... sigh. I'm not as young as I used to be). 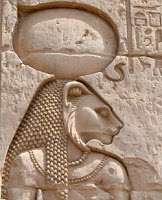 In addition to selling copies of all three of my books, I also had up some artwork and wooden rune sets. The left over rune sets will go up on Etsy in the next week or so. The paintings will probably continue to hang out in a tub until the next convention or show...and will be joined by new paintings, especially after an inspirational Sekhmet ritual. In many respects, it was the spiritual kick in the pants I needed on a lot of levels. I need to start painting more because it makes me very, very happy.
One of the hardest parts of a show like this for me is sitting at a table for 9 or 10 hours (but thank you Angie for the daily chocolate!!) As my regular readers know well is that I'm an introvert. That means my batteries get recharged when I'm sitting off by myself somewhere quietly NOT talking to anybody. I think there's a reason so many of the writers I know are introverts; we're very happy when we're all by ourselves. Unfortunately when you're at a convention sitting behind a table, you're doing nothing but talk to other people, whether it's people walking by who have a question or want to chat, someone who came to a class you did who has a question, the merchants around you who feel like being social (it's a very community enviroment, and I love that!) or friends stopping by, it's almost non stop human contact. Which isn't in itself a bad thing.

Except for that whole being an introvert part.

So I'm glad it's Monday and my hubby is off to work and my daughter is off to school and I have the house more or less to myself (there's still the dog, the cats, the fish, and those seedlings I seem to have started too soon... I swear a few years ago I started tomatoes in Feb and had twiglets to stick in the ground come May. This year I seem to have way more than twiglets and it's not even March!)

I'm going to spend today "indulging" myself a little, resting my legs (and my liver), and working on a story that hatched nearly fully formed in my head over the weekend, then tomorrow go back to work on what I'm SUPPOSED to be working on.