Okay, so I have no doubt that my absence for over a week has been a little conspicuous! After a harrowing, nerve wracked, emotionally charged  week before Christmas, I finally ran out of fumes and had to take an unscheduled, unplanned break.
But I'm back with a vengeance! I'm putting the final details on that HIV novel so I can (FINALLY) ship it off to Elizabeth for consideration and check back on Saturday for the first installment of Jason and Henry!
In the meantime, please give a great big warm welcome to awesome author, fellow Dreampsinner, Michael Rupured!

Thanks, Helen, for inviting me back to your blog to talk about my first novel, Until Thanksgiving, released since we last visited by Dreamspinner Press as a paperback and in multiple digital formats. I'm walking on air.
That the editors at Dreamspinner Press liked my first novel enough to offer me an advance blew me away. But four months ago, I had no idea what was in store for me. Signing the contract was just the first of many thrills, and I'm pretty sure this is only the beginning.
I've had an amazing career in academia and achieved success beyond my wildest dreams. Over the last quarter century, my work has garnered numerous awards, recognitions, and accolades from my peers across the country. I tell you this not to toot my own horn, but for context. Becoming a published author is, beyond a doubt, the coolest thing that has ever happened to me. None of my other accomplishments even come close.
On a scale from one to ten, with ten being the coolest thing in the universe, my day job has a cool factor of maybe one and a half or two. The work is obscure, and difficult to explain to ordinary people. Long before I get to the specifics of my role, eyes have glazed over and the person I'm talking with is looking for an excuse to escape.
When I tell someone I'm an author, there's no need for a lengthy explanation. I write gay romance thrillers. That's all I have to say. But I had no idea--and I'd file this under You Can't Miss What You Haven’t Had--that being a published author has such a high cool factor. We’re talking at least eight--maybe even nine.
Throughout my twenty-five year career, at no time have I ever heard anyone exclaim, "Oh my God! Now I can say I know an extension financial management specialist!" Surprised? Me too, but it's true.
People I know tell their friends they know a published author. More and more, when I run into someone I haven't seen for a while, they already know about my book because they heard it from so and so. Now if I can just get them to buy a copy…

Your readers can find me at my blog (http://rupured.com), on Twitter (@crotchetyman), or the Dreamspinner Press site (http://www.dreamspinnerpress.com/store/product_info.php?products_id=3456). Hot men wishing to vie for my attention and others with a desire to say hello can contact me at mrupured@gmail.com. I look forward to hearing from you!

Josh Freeman knows his best days are behind him. After his partner of seventeen years has an affair with a younger man, Josh buries himself in takeout boxes, half-smoked joints, and self-pity until his best friend gently kicks him in the ass and encourages him to try out a new job in Washington DC—at least until Thanksgiving.

Though DC has its share of troubles, specifically in the form of a murderer targeting gay men, Josh soon discovers its charms as well. Unlike his old home, DC is crawling with men who want to date him—apparently he's not as overweight, out of shape, or over the hill as the man he once loved made him believe. In particular, Josh would love a chance with relocation expert Thad Parker, but Josh is sure Thad is seeing someone, so he looks for love elsewhere. He tells himself he and Thad don't have anything in common anyway.

Then Josh learns Thad really is available. Maybe they can work it out after all. Suddenly the future seems bright again. Of course, Josh doesn't know he's the murderer's next target.... 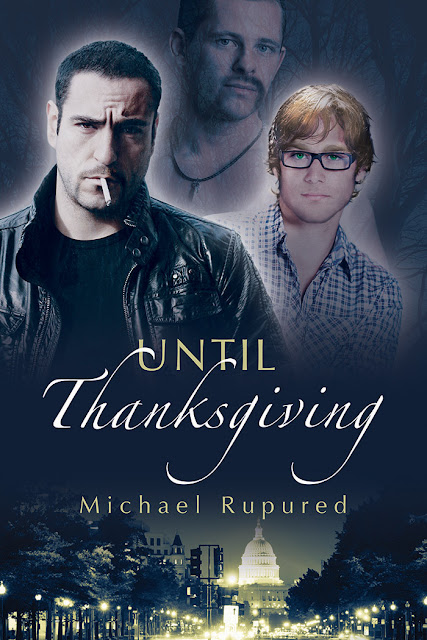 Hi. You mentioned to check back for the first installment of Jason and Henry. I keep checking, but I haven't seen it. Have I missed it somewhere? Thanks.

Hopefully you found it! Life got overwhelming for a bit and I had to take a break, but I'm definitely back!