If you read my post from Wednesday you know how I feel about the misinformed and sometimes downright cruel attitudes of some people towards those living with HIV. The fact that there's still a stigma attached to the disease after all these years is mind boggling. Ignorance isn't going to win the fight against AIDS (or anything else for that matter). Ignorance will only make the situation worse--and that's a damned scary thought. Consider this:

A long time ago (or at least it feels like a long time ago), I made myself a promise; I said that I was going to stop being quiet about the things that were important to me. I'm not a social activist, I'm just an ordinary person. But I pledge to speak my mind, to openly and vocally support equal rights in marriage, health care, and everything else for everyone, regardless of...well, anything. Diseases don't care whether you're young or old, black or white or Latino or whatnot, they don't give a shit if you're gay or straight or bi or undecided; they don't care if you're male or female or somewhere in between, both or neither. HIV can affect anyone--and it doesn't just affect the person infected. It affects their friends, their families. Why, then, are we as human beings so fixated on ethnicity, orientation, gender, and age? We ALL deserve to love and be loved, we all deserve to be healthy and happy. Let's end the ignorance. 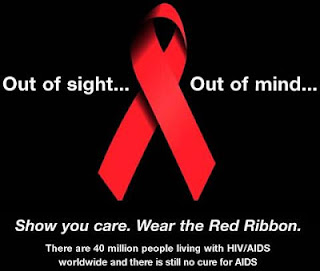 You can buy red ribbons and red ribbon jewelry all over the web, and probably where you live, but with just a little searching, you can find artisans and organizations who either donate a portion of their profits to charity or are non-profit orgs that things like jewelry and clothing as part of their fundraising efforts. Personally, that makes me feel a whole lot better than buying a pin or pendant from some mega corp out to make a buck. (I bought a lovely pair of red ribbon earrings on Etsy.)