The hardest word in the English language is goodbye. It's not hard to say, it's just hard to say, because on Sunday, we had to say goodbye to our dog, my boy Mulberry.
What we thought was a scary and server case of pancreatitis turned out to be an even scarier and inoperable tumor on his liver (most likely cancer, but we didn't have the biopsy--really once you hear inoperable, it doesn't make much difference what it is). The tumor was causing internal fluid buildup which seems to have led to sepsis. There was only one option; we brought him home for one last night (he'd already spent three nights at the vet's) and Sunday morning, we took him in one last time.

He got to spend his last night at home getting cuddles and love and being reminded what a good boy he was (not that I think he ever forgot)--he even got out of bed with us to spend a couple of hours cuddled up with my daughter on the sofa. He got a visit from his Auntie Diane and lots of kisses and hugs from friends via Facebook. The last few hours at home were spent curled up with me in bed--but it was a really rough night for all of us. By morning, he'd deteriorated even further and as much as I wanted just a little more time, we went back to the vet pretty early.

My husband and I stayed with him until he was gone; I held Mulberry and Ed held both of us. It was hard, but I couldn't abandon him to strangers when he was hurting and after so much time spent away from home last week. (Truth is, I wouldn't have just left him to the tech no matter what; he was my boy, he loved and trusted me, no way I wouldn't be there 'til the end). 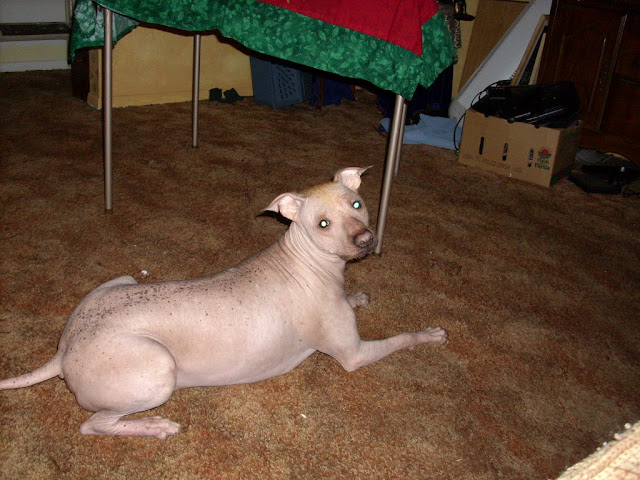 The illness came on pretty suddenly; we'd had a few warning signs of something being amiss the week prior, but he'd be sick for a day and then fine for a couple of days so I thought he'd just gotten into something (he had a certain fondness for Qtips of all things). Whatever was going on inside, he didn't seem to suffer long for it just that last week when things got rough and we went to the vet. I am very grateful for that, and that I got to take him up north with me earlier in the year. It was off-season, so it was just us and maybe one or two other people up at the lake. We spent almost two weeks, me writing on the sofa and him curled up under my legs. We walked on the beach almost every day and he got to run off the leash...which was great except for the day he spotted the rabbit and bolted, scaring the snot out of me. He chased it for maybe fifty feet, then remembered that Mom had treats in her pocket and came running back! Because we live in the city (suburbs), he didn't get to run off the leash very often (although we've got a decent sized yard, of course).

I'd been intending to do a post on my dog for a while, I just never expected to have to start it out like this. Xolos (pronounced "show-low"--and short for xoloitzcuintli) are such an amazing breed (and I had such a special boy). Most people know them as Mexican Hairless dogs, but I never call them that if I can help it; see, about one in three are born with hair. And I mean as much hair as your average Labrador retriever.

Compare a hairless to a coated xolo: 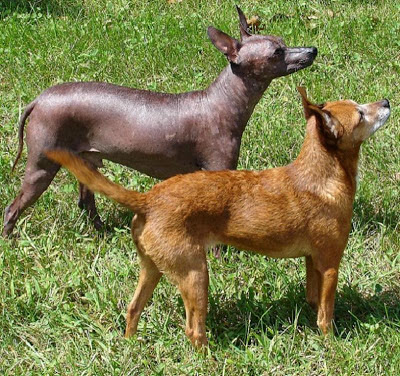 Yup, these guys are the same breed.
Here are another coated xolo: 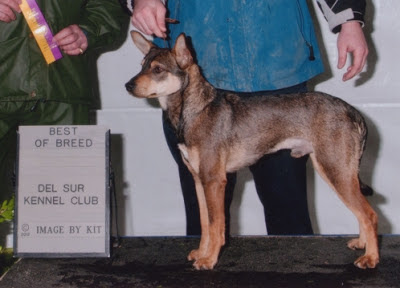 You can see why I didn't like calling Mulberry
a "Mexican Hairless"! 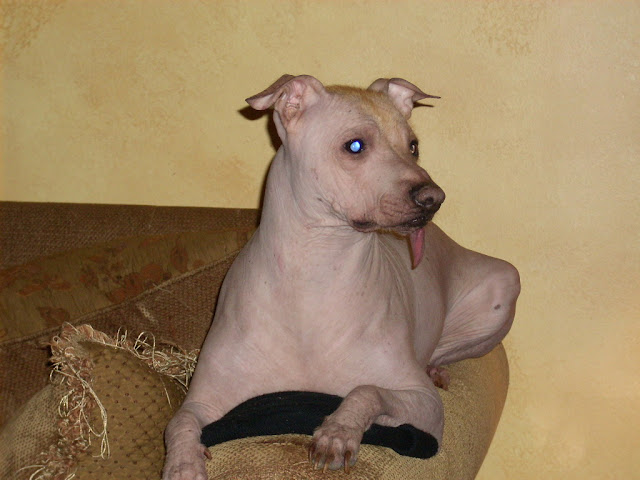 Xolos are the national dog of Mexico and one of five hairless breeds (the others are the hairless khala, the Peruvian Inca Orchid--sometimes called "moonflower dogs", the American Hairless Terrier, and the Chinese Crested--a breed made popular in recent years by Hollywood).

One of the things Mulberry and I ran into a lot was people surprised at his size (he typically weighed in at between thirty five and thirty seven pounds). Most people think of Mexican Hairless dogs as chihuahua size and while they do come in miniature size (9-18 lbs), they also come in medium (18-22 lbs) and standard  (22-35 lbs). (Okay, so maybe Mulberry was a bit spoiled to weigh in at 37 lbs on a couple of our vet visits over the years!) 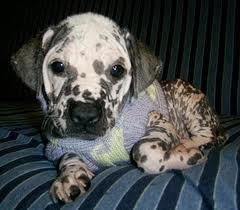 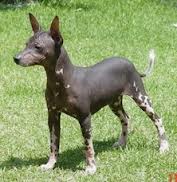 Xolos come in a variety of colors and have a markings that range from spots (practically like dalmatians), to spoltches, to solid colors ranging from tan to black.

Hairless xolos tend to have poor dentation (the American hairless terrier is the only hairless breed not known for bad or "missing" teeth; in the other hairless breeds, the hairless gene is linked with the "bad teeth" gene--yes, so scientific ;-)

The reason Mulberry's tongue lolls out of his mouth is (was) lack of pre-molars. (He actually had quite a few teeth for a xolo). 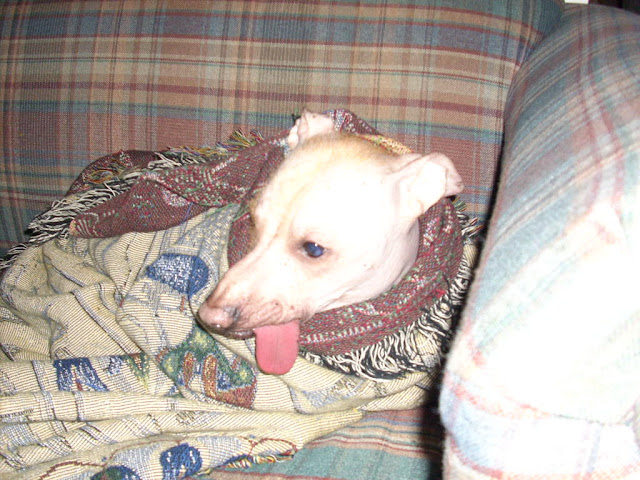 Up until recently, xolos weren't a part of the American Kennel Club (the reason sited was simply lack of interest in the breed, which is pretty believable). It takes a special person to love naked dogs! 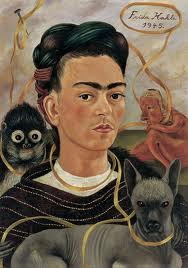 Mulberry came into my life about a year after having to find a new home for my last dog; it wasn't a happy choice, but I'd just had gone through a couple of serious and complicated surgeries and  could barely take care of myself and my daughter; taking care of a dog was out of the question. It worked out for the best (and that dog ended up with a very good home, a pair of retirees who spoiled him rotten!), as I ended up marrying a man who is allergic to dog fur. He would probably do all right with a poodle or a puli, but...well, he kept saying "no", until I showed him Mulberry's picture!

Mulberry flew to us from Idaho--when we picked him up from the airport, he was terrified (who wouldn't be? He'd been in a crate for over 12 hours!) He curled right up into my lap and stayed there...well pretty much for the rest of his life! :D  (No, forty pounds really is NOT too big to be a lap dog, honest!)  He hadn't been terribly well socialized as a puppy; we had to teach him how to play and he had to learn to get along with people and dogs--but he was ALWAYS good with kids, even my husband's nephews. When he'd seriously had enough, he crawled into my lap with this pleading look on his face: "Please make them stop now, Mom!"

Between the tongue that lolled out of the side of his mouth (normal for the breed), the way he got pale in the winter and tan in summer, and the general sweet, goofy look on his face, he won over hearts no matter where we went. Xolos are truly special dogs and my boy was a truly special boy.

He will truly be sorely missed. 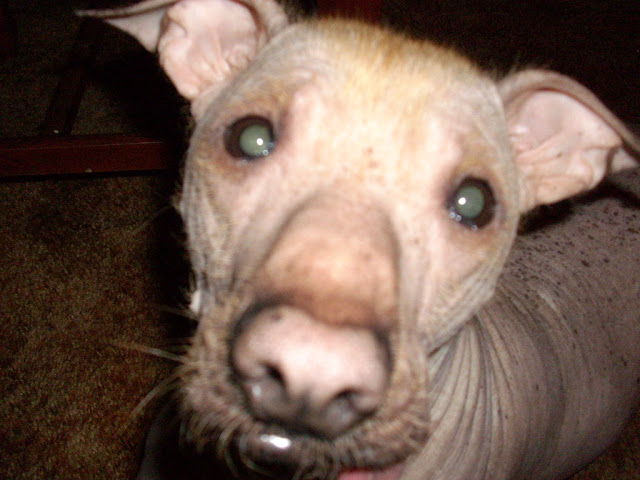 What a sweetheart! I love the tongue - so cute. XD I know you made his life a happy one!

Thanks! It was mutual, he made my life pretty happy too.

I'm still sniffling. Mulberry sounds like a wonderful dog and so cute! I can tell you and your husband filled Mulberry's life with goodness and love. *hugs*

He filled a special place in our lives; my husband had never had a dog before, because of his allergies. But I'm *such* a dog person; I do love my cats, but there's just something special about puppy love :) Yesterday after dinner, both Ed and I tried to save the last little bites of chicken for the dog (the cats had already gotten theirs) and suddenly realized there was nobody to give the last bites to (well, except for the cats, who were happy to oblige!)

He was obviously very loved and of couse he won't be forgotten.
I'm sure he had a great life!

Thank you! It's been a really rough couple of weeks! Just when I thought I was coping, I realized I had no energy for anything.

Just read your post, and it brought back a flood of memories. I've taken a much beloved Irish Setter on that final trip to the vet twice in the past twenty-five years, and will eventually have to do it again, since my current and third setter turned eight on New Year's Day.

It's a hard thing to have to do, but watching an animal you've lived with and loved for more than a decade is even harder.