In classic romance, the "required" ending is always HEA. It's what readers expect and it's what writers deliver. Some contemporary romances, however, end with an HFN feeling--the characters end on a happy note, but HEA isn't a solid guarantee. (There's also "bittersweet" romance, but simply do not do bittersweet--that's like at the end of that episode of Children of Earth where you know Jack and Ianto are in love, but Ianto is dying in Jack's arms and it's sweet and beautiful and you're sobbing your eyes out because it's not fair. And that episode is exactly why I can no longer handle bittersweet in any shape or form).

When I wrote my second novel, Bound:Forget Me Knot, I intended the ending to read "Happily Ever After". (Okay, spoilers ahead). When Henry puts the lock on Jason's collar, after warning Jason that Jason doesn't get the key... to me, that's a pretty solid ending. But not everyone who read it thought so; a number of people interpreted that as "Happy for Now" (perhaps because Henry doesn't return Jason's "I love you". I could tell you why he didn't say it, but we'll save that explanation for the sequel  ;-)  He did sort of tell Jason--and readers--why he doesn't like to say things in the heat of the moment earlier in the book).

I don't mind that readers didn't see the same HEA I do; they didn't get a look into Henry's brain and some folks didn't quite understand what Henry meant when he said he hadn't had sex with anyone since he met Jason. What it did do was to get me thinking about what makes Happily Ever After. Is it "I love you?" How many teenagers say that?

Is it wedding bells? As a two-time divorcee, I can tell you that walking down the aisle doesn't necessarily mean Happily Ever After. You want it to, but sometimes stuff just happens. I know a number of readers did say they wished there would have been "more story", more of what happened after Jason moved in with Henry--but that really is it's own story. (Look for it right here on this blog on Christmas!)  Others said they wished I'd done an epilogue; I did one in my first book, but their story needed it. I didn't feel as if Jason and Henry's tale needed to wrapped up all "Sweet and Tidy". But maybe after two divorces, I'm just too cynical.

It's not that I don't believe in Happily Ever After, it's that I don't think there's any one moment that can define it. I think each moment we chose to make our relationship work is a Happy For Now moment and if you string enough of those Happy For Nows together, you end up with 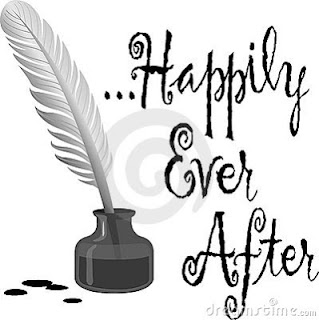 I would LOVE to hear your thoughts on the subject :D

And on that note... today's recipe is one of my favorite (if time consuming) endevors:

This definitely takes some planning--or you can break it down into two steps, and make the meatballs the day before. These, by the way, are the meatballs I make for almost everything. The original recipe calls for ground beef, but I really, really love this with ground chicken, or when I can't find that, ground turkey. I imagine they'd be good with ground lamb, too, especially in a soup like this...hmmm.... I may have to try that next time!

For the Meatballs:
Meatballs aren't difficult to make, they're just very time consuming. Begin by sauteeing the onions and carrots in olive oil, on very low heat until the onions are translucent and the carrots are tender. Then add the garlic and sautee for another few minutes. I usually add the parsley to this mix as well, just to wilt it a little.

Remove from heat and let cool. In while it's cooling, you can assemble the remaining ingredients in a large bowl; simply mix it all together with your (clean!) hands--or wear latex gloves because yeah, it's a little gross. After the veggies have cooled, add it to the mix and mix well. I don't rinse out my pan, but sautee the meatballs right in the same oil because it's full of oniony, garlicy goodness!

The thing with meatballs for soup is that they need to be bite sized. So you're going to be there a while. Roll out your meatballs and cook them on low heat until brown. I usually brown mine in the skillet and then put them in the oven to finish cooking for about 20 minutes on 350; unless it's summer. Then I either use the toaster oven (in smaller batches), or simply cook them in the skillet a little longer. They will have some cook-time in the soup, but I'm really careful when it comes to ground meat.

Now, for the soup you'll need:
In a stock pot, once again, begin by sauteeing the onion and carrot (I can't stand hard crunchy carrots) and celery if you're using fresh/raw--remember LOW heat. Once everything is tender, add the minced garlic and let it go for another few minutes. Add the broth and herbs. Simmer for a few minutes to bring it up to a light boil. Add the pasta and lower heat; cook until tender (about 10 minutes), stirring frequently to avoid burning/sticking. The reason I don't add the meatballs just yet is because you're going to be stirring frequently and I don't want to risk breaking them. Add more liquid if necessary. After the pasta is tender, I add my artichoke hearts and spinach, then slowly put in the meatballs and simmer a little bit longer until everything is nice and hot. Stir it very gently.

Serve topped with parsley and cheese--yum!

And don't forget:
I'd LOVE to hear your thoughts on HEA vs. HFN.
What makes a story HEA?
Posted by H.B. Pattskyn at 12:00 AM

Well, technically, any romance ends in HFN, because you don't know what could happen the next day or week or year. The difference with an "HEA ending" is that it implies a level of commitment between the MCs that shows their intention for their relationship to last forever.

How to define that level of commitment can vary between writers and between readers. I personally feel that an HEA ending calls for an "I love you" from all involved. Without that, it feels like something's missing, and that makes it an HFN for me. That's my personal feeling about it, though, and what reads HFN for me might well read HEA for someone else (or vice versa).

I also think that, if a story is part of a series, it doesn't matter how the individual books end, only the final installment. :)

Interesting blog as always, Helen! I had the opposite sort of issue with "The Melody Thief" - some readers didn't understand why the "HEA" (the "I love yous") happened so early on in the book.

To me, HEA means more than just "I love you." It's about what happens after - in a sense what Shae says combined with your sense that "I love you" is easily said. HEA is about commitment to the future. Yes, it's traditional to have the I love yous. But that doesn't signal "HEA" for me unless it's combined with the higher level of commitment Shae talks about.

Which only goes to show it's such a very personal thing - and I think this explains your boys. I definitely got "HEA", but I want more because that's the part of the story that solidifies things for me. I want to understand what's going on in both the MCs' heads. Can't wait for the after-the-HEA. ;-) -Shira

This is an interesting post for me since I just finished Bound and thought I would check out your site to see if there was any plans for sequel since I loved the book so much, and thought there was so much potential for another :)

I think HEA and HFN is totally dependent on the person. I can see where some people will see a HEA at the end of the book. The end is very very sweet, and you can really see where the Jason and Henry have connected. But for me the books that read and think of the ending as complete and HEA type thing is where there really isn't an a place to go with the story. Where all the problems have been solved for the character and there isn't any real potential for things to change or for the characters to grow more together.

Most stories I think of as HEA are ones where the couple does go through major problems and eventually solve them all and come out together strong. Or stories that take place over a long time where you see the couple slowly for a strong relationship that can't be rocked by outside forces.

Lost Amber, definitely there is room for more story (in fact there IS more story, lots of it, but I realized that once they get back to OH, it sort of started a brand new story...) So yes, definitely plans for all sorts of fun, just as soon as I wrap up the one I"m working on (which also ends on probably a less than "perfect" HEA note... maybe that's just the way I write, I'm still pretty new at this so I guess I'm figuring it out, which is why I was interested in other people's thoughts on HEA vs. HFN).

I think mostly I agree with Shae, that pretty much every story is HFN because you really *don't* know what will happen next week or next year. I like to imagine the characters in every romance I read as riding off into the proverbial sunset and living happily ever after without any hiccups or bumps in the road, but the truth is that life will always throw you curveballs. It's what you do what you do with them (and I guess how server they are) that count. HEA means working them through no matter what what--and I guess for that, you have to have the right partner (right simply meaning someone who wants to work through them with you as much as you want to work through the problems with them. Without that kind of love *and* commitment, it just won't work)

Yikes, that's almost as long as my original post! :D