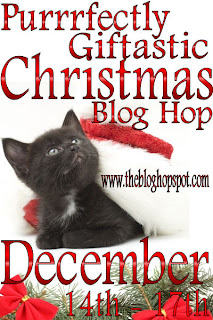 Okay, yes, we're in the middle of a blog hop, but I still felt like doing my regular Saturday post. Just let me make get some "business" out of the way first, since there's a very good chance you're here for the Purrrfectly Giftastic Christmas Blog Hop,

Up for grabs:
~AND~
Entering is easy:

Theoretically, this link will get you back to the Blog Hop main page.

If you happen to want to read my short blog post for today and maybe comment on it, that would be spiffy too, but it's not required...

As the year draws to a close, I thought I would take some time to reflect back on my favorite books of 2012 and why I liked them so much. These books weren't necessarily published in 2012, I just happened to have read them this last year.

Here are my top eight, in no particular order:
There are too many books to talk about in one sitting (without making this a ghastly long post), so I'm going to split them up over the next few weeks. First up:

Duck! and Magpie
by Kim Dare 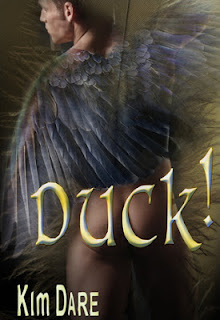 I'm going to comment on these two together  because they're two books from the same series; in Duck! we meet Ori, a sweet if "ugly" little duckling (he's more uncoordinated than physically unappealing) and Raynard, a very stubborn hawk. Ori and Raynard appear as secondary characters in Magpie, which centers around raven Everette (who we met Duck!--and who I happened to have fallen in love with at that first meeting; there's just something compelling about Everette...or maybe I just love ravens!) and a troubled (and trouble-making) magpie named Kane. (Seriously it's a bit of both where Everette are concerned; I do love ravens, but there is obviously something very special about this quiet corvid). 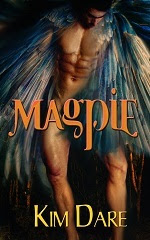 I love Kim Dare's avian shifters. First and foremost, bird shifters are just cool! But beyond that, the world that Dare creates for her avian shifters is well thought out (we see more of the thoughtfulness of it in the second book).

Dare also delivers up a good sized helping of angst in both books, which also makes me a very happy camper. Ori and Kane both come from difficult backgrounds, and neither of them is especially good at trusting; for Ori, it's more a matter of not understanding why anyone would value him (ducks are pretty low on the proverbial pecking order--pun intended). Kane has just been told he's not worthy of loving or being loved so many times that he actually believes it. It doesn't help that nobody even seems to like magpies. I noticed in some of the reviews of Magipe that other readers had a hard time connecting to Kane--but I saw him for what I believe he is: troubled and hurting, just needing somebody to convince him that he's worthy of having a home. And of course I loved the part Ori and Raynard played in making that happen. I truly adore Ori and it was good to see he and Raynard again. (It was almost comical how jealous Kane got of Ori and Everette's friendship.)

There isn't as much backstory as I might have wanted for Everette or Raynard, but I still got a complete sense of who these guys are (strong, noble, and above all deserving of the gift of submission). Of the two, I would have liked to have known more about Raynard's past, simply because of some of the tantalizing little clues Dare gives that maybe he's one of those guys who colors outside the lines a bit (or at least he butts heads with Hamilton, the eagle who rules the nest).

While I was looking over my Amazon wishlist, I realized that one of the books on my to-read list is also by Kim Dare...guess what I'm going to go buy a copy of as soon as I finish up this blog post!

With a Kiss has been on my to-read list for six or seven months. I was wavering because I'm stupid-picky about vampires, but I was so impressed by Dare's avian shifters, I feel confident that even if her vampires aren't quite "my" vampires, it'll be kinda like I feel about Tanya Huff--it's her world, we don't have to see eye to eye, because when the writing is that good, I can forgive that we work from different cannon!

I loved Duck. I'd like to read it again but it made me cry the first time. Magpie was just as good. I'd love to see more of this series.

I was reading on the Good Reads, Kim Dare has said she's planning one more book for the series...but we're going to have to wait a year or so (but I guess good things are worth waiting for!)