....of the cinematic variety, that is.

After writing last week's Saturday post, I realized I'd left out another of my favorite (and versatile  although maybe not as much so as Weaving and D'Onofrio) actors.

Alan Rickman--you know, the guy who played Severus Snape. That guy who could (IMO) make the telephone directory sound sexy. He was also in Sense and Sensibility as a quiet nobleman, Galaxy Quest, as an actor playing the alien science officer, he played the title role in a television movie called Rasputin, and the angel Metatron in one of my favorite films, Dogma. 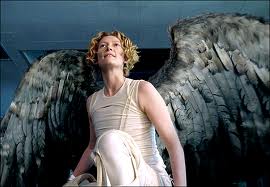 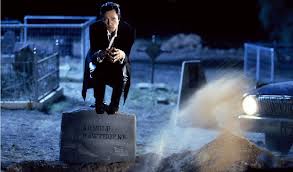 There are other cinematic versions of Gabriel, of course, but of the ones I've seen, these two are the absolute best--so much so that I've never been able to decide which Gabriel I loved more. They're both "bad guys", but they're the kinds of bad guys whose points you can kinda see. And in some ways, their points are similar. We monkeys have it good in God's eyes, but we fail to appreciate it. Both actors did a magnificent job portraying slightly over the edge angels--and both Swinton and Walken are amazingly well rounded actors to boot.

So... any opinions? Who's the better Gabriel, Tilda or Christopher? I'd love to hear what readers think.

While we're on the subject of angels, my favorite cinema/literature "angel" of all times is still the Crow, who while not a traditional Judeo-Christian angel, embodies the spirit of an angel rather better than any chubby faced "cherub" (look up cherub, and you'll understand why I put that in quotes).  I am somewhat more partial to the movie version of the Crow than the graphic novel version, and definitely just the first movie. Somehow the others seemed to miss the mark.

My favorite book about angels continues to be To Reign in Hell, by Steven Brust (seen on the right). I'm currently reading Clovenhoof by Heide Goody and Iain Grant, and so far, I'm totally enjoying the ride!

And lastly...
a very different sort of Angel
from Rent, Angel (the gorgeous drag queen in red)
and Collins singing I'll Cover you
and I'm sure Law and Order fans will be
as impressed as I was at Jesse's performance!
I had no idea the man could sing like that.

HIV is an important theme in Hanging by the Moment
and of course it's a HUGE part of Rent.

Here's the reprise of I'll Cover You from Angel's funeral
this is the stage version:
and again, Jesse's voice just blows me away
so does the fact that the same song can be
so uplifting and so heart wrenching
Posted by H.B. Pattskyn at 12:00 AM