I'm beyond thrilled to have another guest on this week (who has literally saved my bacon by guest blogging for me since I am SOOOO far behind it isn't funny!) 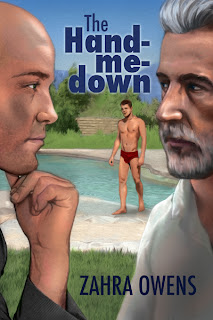 Please welcome the lovely and talented Zahra Owens whose book The Hand-me-down has been on my ever-growing list of books-to-read-REAL-soon since I first saw the cover on the Dreamspinner Press website a couple of weeks ago--I was intrigued by the title, so  I clicked on the title for more information and immediately put it on the list of things I want to read in the very near future.  ;-)

Hi Helen and thank you for allowing me a little space on your blog!

I was reading your post on POV and writing an entire story from one protagonist’s POV and I had to smile.

All my cowboy novels switch POV with (almost) every chapter, telling the reader the story through the eyes of one, then the other character. I love figuring out where to break the chapter and what parts of the story are best told from whose POV. It’s a series, so because I didn’t want to break style, they’re all written that way.

Needless to say when my latest plot popped its head up, I knew I had to write it differently.

The Hand-me-down is entirely told from one POV: that of Jeremy “Jez” Robinson, headhunter and workaholic extraordinaire. He’s a man working a high-powered job and he jets around the world for a living. He’s forced to slow down when an Icelandic volcano erupts and strands him in sunny Barcelona. To pass the time he looks up an old friend of his: Nick Stone. Within 24 hours of arriving at Nick’s Barcelona villa, he is introduced to Nick’s painfully shy boyfriend Jamie, who can’t talk to strangers, and told Nick is dying and is looking for someone to take care of Jamie after his death.
All through the book we only see and feel what Jez goes through. We experience his doubts about what Nick is asking of him, his terror when he realized the responsibility that is thrust upon him, and the feelings the rather enticing Jamie invokes in him, while at the same time these feelings make Jez feel guilty because his friend, and Jamie’s lover of eight years, is dying.

The only way we can learn about Nick’s motivations and Jamie’s feelings is through what Jez sees and feels. It’s an interesting exercise in writing (and, as a writer, I do love a challenge!) and for me, it gives me the chance to crawl a little deeper under the skin of my character. It also gives me the opportunity to show something I feel we see too little of in books: the fact that people draw the wrong conclusions and live by those conclusions until they are persuaded they were wrong and then need to adjust their sights. If you’re writing in one POV this also means the reader will have to follow the one character’s “truth” until they are thrown a curveball because the one character learns something new that changes his idea of the whole matter.

In The Hand-me-down, because of his selective mutism, Jez doesn’t see Jamie as an intelligent, consenting adult until Jamie makes it absolutely clear to him that he is. Before uttering his first word in Jez’s presence. Jez also puts Nick on a pedestal and has a hard time seeing him topple off it. I’m not going to spoil it for you, but I had fun writing that!

Bring a box of tissues, though. I do like a good tearjerker!

The Hand-me-down is available in paperback and eBook from Dreampinner Press starting Sept. 14th.

You can find me @ www.zahraowens.com

Thanks again, Zahra, for joining me (and saving my behind!)

To everyone, I promise to get back up on top of things in the coming week.

Next week I'll be giving a warm welcome to guest Chris T. Kat.

Today's recipe is written with my friend Tia Fielding in mind; we were chatting via email (seeing as I live in Michigan, and she lives in Finland) and she mentioned broccoli soup. Yum! And what could be simpler? (Okay, I was skimming recipes online, because I don't cook with exact measurements, and I wanted to get some idea of correct measurements...and let me tell ya, MY broccoli soup is SO much easier than ANY of the recipes I found online!  Yikes. Give this a try and see what you think)

The only special equipment you *might* need is a food processor--but it isn't necessary, it's just nice if you like a super creamy soup.

A whisk is also really helpful for melting the cheese. I don't know what I ever did before I bought my first whisk! No kitchen should be without one!

Ingredients:
2 good sized heads of broccoli
6 to 8 slices American cheese (this is about the ONLY time you'll see me putting that in a recipe, but it melts so much nicer than cheddar) -- and of course you can use more or less depending on how cheesy you like your soup
1 cup of whipping cream or half and half
3 cups of milk (whole makes a heavier soup, 2% makes a less guilty meal  ;-)
4 Tablespoons flour
2 Tablespoons corn starch
Salt to taste
Cheddar to garnish (optional)
enough water to steam the broccoli

And obviously a big enough pot to cook it all in!

Okay, here's a real trick for broccoli. The stems are the BEST part; they are so sweet and yummy...don't believe me? Peel 'em, THEN cook them and try it sometime. It's the skin that's bitter. The "meat" is delicious.

So, begin by peeling the broccoli. I don't obsess about getting it all off for my broccoli soup, but I try to get rid of as much skin as possible. Then chunk up the broccoli and cook until tender (I learned the hard way that it's best to cook it BEFORE turning it into soup).

If you have a food processor, toss the cooked broccoli in and process it to desired consistency.  Some days I make super smooth soup, other days I process about half of it to baby-food consistency and leave the rest in nice sized chunks. It depends on my mood.

Set the broccoli aside for a minute. Back at the pan, slowly melt the American (i.e. processed) cheese into 2 cups of milk on very LOW heat. Melt the cheese in one slice at a time, whisking it until it's melted before adding more--otherwise you'll have a gloppy mess.

Take the last cup of milk and whisk the flour and corn starch into the last cup of milk (cold) and pour it slowly in, whisking; keep on stirring/whisking until the milk/cheese mixture thickens. I usually add my broccoli back in at this point, bring it up to temperature (just a little below a simmer), salt to taste, and add the cream in at the very last. You can add more milk if you need/want to make it a little thinner.

That's it. Serve garnished with cheddar (or cheddar / jack mix) and curl up with a good book!


Note:
I once experimented with adding garlic and onion, as most recipes call for. The results weren't desirable (at least to me). To each their own, I suppose. I like broccoli soup really simple, broccoli, milk/cream, and cheese.