Michael Rupured, whose book Until Thanksgiving is due out later this year or very early next year from Dreamspinner Press (look for it December/January). 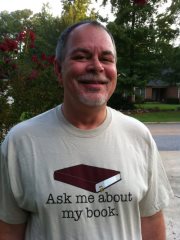 My first stab at writing a book was a memoir. Yes, my life is that interesting—at least, I’ve always thought so. The research I had to do wasn’t all that difficult. The journals I’ve kept since 1979 came in handy. Informal interviews with family members filled in most the gaps.

The 110,000-word tome covers my life from conception to just a few years ago. It suffers from a horrible lack of focus, has more characters than War and Peace, and is all tell with no show. After I’m famous I’ll do a major rewrite and maybe break it up into a trilogy. But for now it’s just fine simmering over on my back burner.

My first novel, Until Thanksgiving, takes place in Lexington, Kentucky and Washington, DC in the latter half of 1997. I really did move from Lexington to DC in July 1997. Most of the locations are places I frequented during the eighteen months I lived in our nation’s capital.

You could say the time I lived in DC was all research for the book. Too bad it’s too late to amend my tax returns. Beyond that, the research for my very first work of fiction revolved around how to write a novel.

The critique group I joined taught me almost everything I know. Every other Saturday for coming up on two years, we spend three or four hours discussing how to improve each other’s work.  When I didn’t know what they were talking about—which happened a lot when I first started coming—I hit the Internet to read more. I learned a lot from the books they suggested reading, too.

When I finished the manuscript I returned to the Internet to research my publishing options. Wow—so many choices. I ruled out an agent and self-publishing, seeing them as opposite ends of the same continuum. Reducing a million publishers that fell between those two extremes down to my top five or ten choices took forever.

Was it worth all the effort? The results speak for themselves. I got a contract for my first novel in the first round of submissions. Until Thanksgiving is scheduled for release in December or January by Dreamspinner Press. I haven’t stopped grinning since I got the advance check. You could crack an egg on my cheek muscles.

A sentence in Until Thanksgiving inspired a prequel I’m working on now called After Christmas Eve. The story begins on December 24, 1966 and is set in Washington. The basic outline popped into my head one afternoon.

That I had selected to write about a time and a place about which I knew absolutely nothing scared the hell out of me. I didn’t know if I was up to the task. In truth, I still don’t know, but I decided to give it my best shot.

Before I wrote a word I called my friend Maurice. He’s gay, grew up in Washington, and knew he was gay in the sixties. He remembers dressing up in a coat and tie to go out and being careful not to stand out from the crowd in any way. There were no gay bars, but there were places where gay men were known to go. Police raids were common, so he always knew where all the exits were and was ready to run should the need arise.

My mind reeled with possibilities! Maurice gave me the names of a few places he remembered, which I promptly Googled. I stumbled across the transcript of a panel discussion about the origins of the gay rights movement in DC that included several of the men and women who launched the movement. The panel discussion turned up still more people and places to Google.

Next thing you know, I had a backdrop for my story. Continued Google searches turned up real events that I wove into the narrative. I learned there was no Metro system, that a record-breaking snow fell in DC the day my novel opens, and that the Chevrolet Impala was the top-selling car—interesting details that were easy to incorporate into the story.

The history drove the story. It’s just so very interesting. I came out in 1979. Things had already changed quite a lot from those pre-Stonewall days. They’ve changed even more since I came out. I wouldn’t have appreciated how far we’ve come without the research I’ve had to do for this novel.

But first things first. Until Thanksgiving hasn’t come out yet. I don’t have a cover or an exact release date yet, but here’s the blurb I used in my query:

Gay and pushing forty, Josh Freeman knows his best years are behind him. After his partner of seventeen years has an affair with a younger man, Josh buries himself in a pile of take-out boxes, empty bottles, half-smoked joints, and self-pity. His best friend, Linda does what friends do—gently kicks his ass and encourages him to give the job he’s been offered in Washington D.C. a try—at least until Thanksgiving.

Thad Parker, a DC-based relocation expert, rarely dates and has never fallen for anyone. But when he meets Josh Freeman and shakes his hand, a spark hits him like a lightning strike. When Josh takes an active interest in someone else, Thad decides to wait.

While he waits, misunderstandings about Thad’s relationship with his older roommate, a reckless encounter with a serial killer, and a brush with death conspire against Josh and Thad’s chance at happiness.

Thank you, Helen, for this opportunity to meet your fans. I’ll let you know when I have a cover, the official blurb, and a release date. Until then, I invite your readers to follow me through the process of getting my first novel published.

In honor of Until Thanksgiving and because we're creeping up on Turkey Day here in the U.S. faster than I really want to think about, here's a recipe that is sure to impress the relatives, although it is NOT dieter friendly! (Still, gotta splurge once in a while, huh?)

Special equipment:
one of these babies (IMHO, this is the best shape) 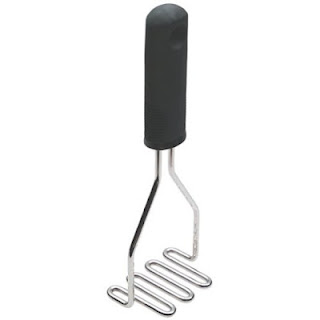 I like to start with yellow skin potatoes. If you're having the whole crew in for dinner, and depending on how many are potato-crazy like my kin, and how many side dishes you're making, you're going to want to start with about a pound of potatoes. That isn't as many as you think--but leftovers can always be re-heated the next day or turned into perogis!

First step your garlic cleaned (pealed); I like to give it a good smash with the flat of my french knife and then peal off the skin. Pop the garlic into a square of tin foil and pour on a little olive oil. Seal it in well--the idea is to make a tin foil pouch--and put it in a hot oven (about 350 degrees) for a thirty to forty minutes.

Next step, the potatoes:
I leave the skins on and just give them a good scrub. Now, yellow skins come in all sizes and you're going to get all different sizes in the bag. I usually save the tiny ones for roasting whole. If you end up with really big spuds, you'll want to cut them into halves and quarters--the idea is for all the pieces to be roughly the same size, so they'll all be done at the same time. Remember, you've got plenty of time, it takes a while for that garlic to roast.

When the potatoes are soft (a knife or fork slides easily into them) drain the water (i.e. dump your spuds into a colander over the sink). Return them immediately to the pan and start mashing with potato masher. As soon as they're mashed up and still steamy hot, add your egg yolk. You want it to basically coddle, but not cook. Next, add in your butter, dill, cream, and last but not least mash in those roasted garlic cloves, olive oil and all. (I use olive oil because it withstands the heat of the oven MUCH better than butter).

And yes, of course you can add more butter if you like--or leave it to your guests to add butter at the table.

I usually transfer my potatoes into a casserole (oven safe) dish and put them in the oven to keep warm while I get the rest of dinner on the table--if you brush the top with a little butter, you'll get a nice crispy crust that's really yummy!! (You might need to switch the oven to broil and obviously leave the taters uncovered--but keep an eye on them! Golden brown can turn singey in a heartbeat!)

Enjoy and thanks again to Michael for being here today!!

Thanks for hosting me, Helen!

It was a pleasure! Thank you so much for being here. :)