Chances are, you haven't heard of Covered in Light. If I didn't have a very dear friend who chooses to cover, I wouldn't have either. A couple of years ago when my friend, a strong, beautiful, proud Pagan woman told me she was going to start the practice of hair/head covering, I'll admit I was momentarily taken aback. (Maybe I should mention that she's also Irish by decent, so I couldn't peg it as a cultural thing any more than an obviously religious thing).

As a typical American--probably a typical Western woman, I had lots of preconceived notions about covering, no few of them coming from my own Russian background (in the Russian Orthodox tradition, women are expected to cover their heads, at least in church, as a sign of piousness--please do *not* ask me to expound on my feelings, they're not very nice. It always struck me as a sexist practice, something to further separate women from me, to make us somehow lesser--we had to cover. I never did--none of the younger women did). But I digress... or maybe not. As Westerners, we hear the word covering, or see a woman with her head covered and we tend to jump to conclusions. They aren't always quite the worst; we might assume a bad hair day or think hair loss... but when we see certain types of hair covering, we think "oppression". We think about Middle Eastern women, Amish women. We often assume that women in these cultures have "no choice" and that no woman given a choice would EVER choose to cover.

But here was my beautiful, strong, proud Pagan friend making just that choice without any pressure from friends or family.

She told me about it over the phone, or maybe via chat, I don't recall, but I know she couldn't see my momentary askance expression and being a good friend who wanted to support another person's choice, I didn't say anything negative (I don't think I actually said anything) or ask any of the dozen intrusive questions going through my head.

The next time we saw each other face to face, there my friend was with her long blond hair covered, bu a beautiful silk/cotton wrap--I'm almost positive it was bright turquoise. Okay, so it definitely wasn't what I'd imagined. I still didn't ask why an Irish Pagan was covering, but I did discover that it's not just something little old Russian women, Amish, and Middle Eastern women do. Jewish women cover (which I guess I should have known, I'm reasonably familiar with Jewish culture, but I never stopped to think about it, probably because Jewish men have as many traditions involving head and shoulder coverings). Women who cover don't just wear black (although some do). Head covering can be outwardly beautiful as well as spiritually significant.

This might be good place to insert that I did once work with a lovely young Middle Eastern woman who explained that she grew up over here, although her mother had immigrated from over there (I honestly don't remember which country); my former co-worker said she was given a choice as a child, to cover or not when she came of age, and after some thought she decided to cover. She also said that when she had children, she planned to give her daughters the same choice. I think about her once in a while--she was in school for fashion design, and a beautiful example of someone living true to her culture but also being exactly who she wanted to be.

It was also this same store where I had my first encounter with bigotry against women who cover. One day (as there were on many occasions, actually) a group of heavily covered Middle Eastern women in the store shopping. I thought nothing of it. I'd found the women who came in covered to be soft spoken and polite and seriously that's all I ever care about when dealing with customers. But then this other woman--American, I presume (she certainly looked and sounded like a typical American housewife) came up to me and informed me that what those women were doing was illegal.

Yes, I gave her the hairy eyebrow.

She went on to say that people weren't allowed to come into a store with their faces covered like that, what if they wanted to rob the place or something.

Well, wasn't I going to call the police??

No. I most certainly was not.

She left in a huff.

At the time, I found it both sad and amusing....but now I have a friend who covers. She doesn't cover her face, but women who cover their hair *do* attract attention, and not all of it positive.

So what is Covered in Light? It's a special day (September 21) organized by a group of Pagan women to support those who cover by choice. Here's their Facebook Page.

And yes, I'll be covering tomorrow in support of my friend, my former coworker, and anyone else who makes the choice to cover. 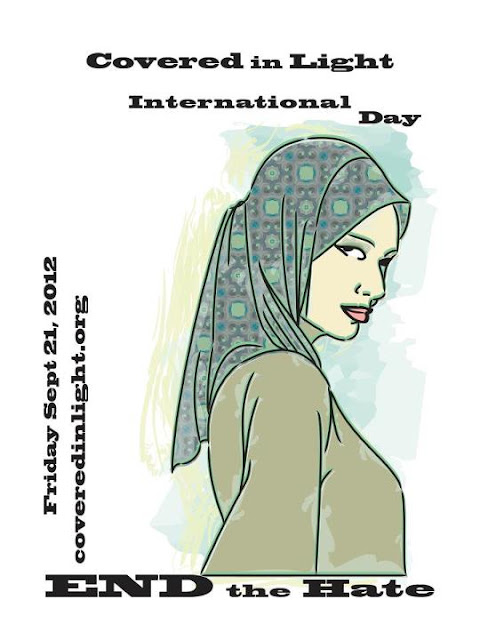 This is a lovely post about a sensitive topic. There's plenty of misunderstanding to go around, but for me it always comes down to choice. If it's the woman's choice, whatever her reason, then good for her. Embrace her and accept. But I cannot accept, and never will, being told I have to do it. I think that's really the crux of it: when women are forced to cover themselves, it's no longer beautiful. It's a stigma. The problem then becomes one of not knowing why a woman is covered or how to react to one who is. If we're accepting, what are we accepting? More talk about what covering means by women who embrace it would help other women accept it as the beautiful thing it can be.

Thanks, Tali! You're so right; like so many other things, the more we talk about and try to understand covering, the more we can remove the stigma from those who cover because they want to.

My initial knee-jerk reaction was based on the experiences I had growing up (where it wasn't even a huge deal, the older ladies covered their heads in church, but it just struck me as so sexist...I'm sure they didn't see it that way, it was just "what one did"--the younger members of the congregation weren't forced into it, although a couple of the old coots gave us the stink eye, Father never said "boo"--but that's another story, he was one very cool guy).

This is a complicated subject. It is like anything though, it should be the choice of the person doing it. The negative reactions from people are unfortunately based mostly on stereotypes and inaccurate. I will comment more on this tomorrow after my walking a mile in someone else's shoes. But I will say, when you cover you learn a lot, about yourself, about perceptions and about how others look at you.