The topic of sequels isn't exactly a hot one at the moment (most writers I know are busy debating genre vs. literary fiction:

Although certainly no few people are going to be talking about the fact that there will be no Pulitzer Prize awarded for new fiction this year:

But I'd like to talk about something else. You know, just to be different  ;-)

I've got two Works In Progress at the moment, and at least one has sprung a sequel...or at least a spin off. It could go either way. Or both ways.  Well what did you expect from a lady who bats for both teams?  ;-)

Seriously, though, I have to wonder:
do romance readers want sequels? (I mean really want, not just think we want.) Isn't romance about that first blush of love (or occasionally rekindling an old flame)? Once we see the first look, first kiss, first hot sex scene, what's left? More of the same? Are sequels to romance novels little more interesting than tired old marriages?

And yet, there are sequels in the romance world. There are even full series (J.P. Barnaby's Little Boy Lost, a six book series, springs immediately to mind.)  I haven't read them, but they are SO on my "to read" list! So is Ariel Tachna's Partnership in Blood  books, because, well, vampires and wizards, need I say more?

Yet, do readers really want to invest that much time the romantic adventures of one or even a couple of couples? And what if the sequel doesn't live up to readers' expectations? Will it drag the first book down, too?  Is a sequel, by it's very nature, it is bound to be weaker simply because there are no more "firsts"?

Who wants to read about the continuing saga of our heroes AFTER they've ridden off into the sunset (or wherever it is vampires ride off into)?

And how many is TOO many sequels...? 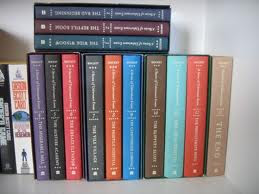 Okay, going astray here, I WANT one of these, only with MY book covers.... I know it isn't out yet, but I'm thinking about writing a sequel to my BDSM novel. The material is there--in fact, a lot of the writing is there because I didn't know quite where to end it, so I kept writing, and writing, and writing... and I know what happens after Jason and Henry ride off into the proverbial sunset. But do you, the reader, want to know? Do you care about the Henry's jealous ex, Derrik, Jason's father's wedding, or the woman who wants to occupy Henry's bed--or at least his St. Andrew's Cross, because while he might Top both men and women, he definitely only sleeps with guys--? (And of course that causes a hiccup in the relationship because Jason isn't the most secure kid in the world--but the first book cuts off before y'all even get to see where Henry lives, let alone some of the people in his life, like his mom and her emus. Yes, emus).

Sequels are certainly popular in other genres; they're the bread and butter for science fiction and fantasy writers, and let's not forget the cozy mystery (okay, those aren't exactly sequels, but still...)

Do you want to see a true sequel for Heart's Home, or do you really just want Robin's story? (Which isn't the first thing I'm due to write about, I'm writing about Thad, that other contrasexual werewolf in Alun's pack, first. Oh, and Rhianna comes back of course because she's not done making trouble for Alun and James. No way she'd slink off that quietly--but I'm guessing you already knew that...)

So... romance readers, the floor is yours: sequels or spin offs or both or neither...


And yet again, today's recipe has absolutely NOTHING to do with any of the above...unless you're into food and sex, which quite frankly, I'm not...

Now, I realize that summertime isn't when most of us thing "soup" -- unless you're thinking of gazpacho soup, a yummy cold tomato based soup.


To peel tomatoes, all you need is a pot of boiling water, large bowl of ice water, tongs and a little bit of patience. While you’re waiting for the water to come to a boil, you can deal with the rest of the ingredients:

Probably by the time you’ve done all this, your water will be boiling. Lightly score the tomatoes (i.e. cut an ex in the bottom with a nice sharp knife). Drop in those tomatoes. Let them sit in the water for approximately 20 seconds. Pull them out using tongs, and drop them into the ice water. You can go ahead and let them rest there while you finish up:

To skin the tomatoes, simply peel at the score marks. The skin should slide off fairly easily.
Go ahead and give a fine chop to those tomatoes; slide them, juice and all into a large bowl with the rest of your chopped and minced ingredients and citrus juice. To the pot add:


If you have a food processor, you can give everything a rougher chop and process it, but I tend to like a nice chunky soup. If you’re going to run it through a food processor, add the corn AFTER it’s been pureed.

Cover and let sit overnight in the fridge. Serve chilled on a hot summer day, maybe with some of those midnight margaritas I gave the recipe to a few months back….

And just in case you missed it the first time around.... 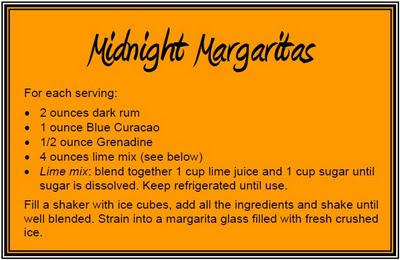 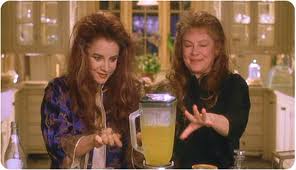 Well, now that you've mentioned the emus we'll have to see the sequel!

Seriously, though: I think sequels in romance are similar to sequels in other genres: as long as there are new facets of the characters to explore, you can continue writing sequels. The fantasy folks may say: as long as there are new quests! - but there are always new quests; I didn't slog through 3000 pages of Vance's Lyonesse series because there were new adventures, but because he examined different characters or went into different aspects of old ones in each book.

Of course, when you get to the point where the couple's conversations all concern whose turn it is to do the dishes, it's time to dump those guys and find some new hotties ;)

;-) The emus are priceless... the idea came from a conversation I had with a friend once. We were merrily chatting away and he had to excuse himself to go shoo his neighbor's llama back home. The neighbor also raised emus.

But I think you hit the nail on the head; there *are* always new adventures. I think what really keeps readers reading is looking at different characters or different aspects of readers' favorite characters.

I think one thing that drives a lot of successful romance novel series is the delayed happy ending. Each novel resolves some of the conflicts keeping the main characters apart, but not everything, so there's still some tension keeping the reader coming back for the next novel in the series. Once the two characters are together and happy, there isn't really a need for a sequel. And if there IS a sequel, it may ruin the first book for some readers, unless there's an even happier ending in the second book.