My first "exposure" to anime came many, many, MANY years ago with Kimba the White Lion. Of course, I had no idea it was anime. I didn't even get that Battle of the Planets was anime, either (at least not until later). By the time I was watching Robotech, I had a clue... although it would be a few years before I discovered yaoi (and admittedly, my experience is limited, if only because there are only 24 hours in a day!)

Many more years later, I must confess to having watched and enjoyed much of Sailor Moon, and having gotten sucked into (but not yet been able to finish) Revolutionary Girl: Utena. Utena is definitely my favorite...

So, the short version is that I don't have any great insight into yaoi, other than it can be quite beautiful... and I'm looking forward to indulging in a little blog hopping to see what other folks have to say/give away...

Oh what a clever segue! (hey, that's as clever as it gets at midnight...)
Up for grabs is one copy of my debut novel, Heart's Home: 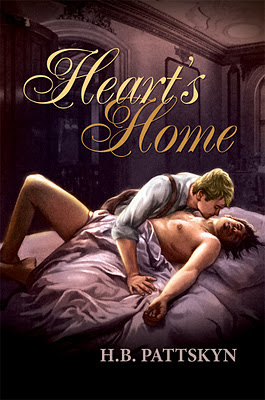 In a nutshell, there are werewolves, a daemon, a murder or two, a constable (whose a wee bit out of his depth, seeing as he doesn't believe in things that go bump in the night), a tiny bit of a love triangle... and the whole thing is set in Victorian London.
As one reader so aptly described it,
Heart's Home is an Urban Fantasy that just happens to be set in in the 1800's

If you want to read one of my favorite excerpts, click on the tab above labelled "Heart's Home"

Entering is easy:
Just leave a comment below (all the better if you tell me what your favorite manga/anime is... but it's not a requirement, honest! Just saying "hi" will get your name in the drawing).
On the 25th I'll draw a name out of the hat and announce a winner...

Here's the opening to Revolutionary Girl: Utena...
in Japanese... ah well. Hopefully it'll give y'all an idea what it's about  ;-)

I am a newbie to manga/anime so I do not have a favorite. I am searching a few sites now so I can purchase my first book and then I can also be hooked.
Yvette
yratpatrol@aol.com

i've read a lot yaoi or shonen-ai manga - i like the more tame shonen-ai though (more character development instead of heaps of sex XD )
but i kinda grew bored of it after some time. most of them are just so similar without major differences. you could just trade the names and it would be the same. nevertheless, there are a few really great ones out there - like utena (also one of my favourites ^^). Gravitation was fun too - totally crazy and i loved it.
your book looks intersting by the way - would be glad to have a chance to read it.

For me, anime (and manga) have always been a wonderful escape! Something about a "drawn" universe just sets my mind and imagination free. Yaoi is just that much better, because my imagination can roam all over hot male bodies!

Thanks for the post, Helen! I've already got your book (and loved it, of course), so don't enter me into the drawing - just keep writing great stories like "Heart's Home!" -Shira

Osamu Tezuka (author of KIMBA) was really amazing...there was an exhibition of his work a few years ago, and the guy did EVERYTHING, from m/m to intensely hot smut to sweet children's fables. My favorite manga is SHOUT OUT LOUD--not super-graphic (though that can be good!), but with sexy moments, sympathetic guys, and a quirky but honest story.

Stopping by on the blog Hop! You really need to check out Yoai Manga and vids. There's some awesome stuff out there.

Stopping by on the hop to say hi :) I'm only now starting to discover the awesome world of yaoi, so can't offer suggestions just yet! Thanks for the post:)

Thanks for participating in the hop! To be honest I've never read Yaio before but I plan on changing that. Your book sounds great as well!

I found anime much later in life, but I love it still.
Your cover is beautiful btw. :) What's so great about the hop is all the new books I now want to read lol.

Thanks for joining in. :)

One of my favorite anime's of all time is GunXSword *sigh*. So good, although I did get hooked on Sailor Moon back in the day. Lol. Thanks for posting and your prize looks tasty! Love that cover. :)

Oh man... there are too many yaoi anime that I adore! Yaoi Haven is a great place to watch a lot of them. I think Junjou Romantica (Pure-hearted Romance), Sekai-ichi Hatsukoi (World's Greatest First Love), Gravitation, and Gakuen Heaven (Academy Heaven) are big faves. The Tyrant Who Falls in Love is good too and I keep up with the mange of it as it's available translated online. :)

I wish I could give an anime/manga reccomendation but I am looking for some too- I am very very new to manga and have no idea where to start which is why I'm loving this hop! I do hope you get lots if good suggestions!

Not entering your personal contest, because I already have (and love) Heart's Home. I just wanted to stop by and say that Seakiichi Hatsukoi by Nakamura Shungiku is my favorite yaoi. If you only have time to read one yaoi, that would be the one ^.^ It's contemporary though, and you might be more interested in paranormal, but the emotions and images in Sekaiichi are just to die for.

I’m going to be lame and say that my favorite manga series is Fruits Basket.
I’d been acquainted with anime first, through Pokémon, though it took me a few years to know that it *was* anime. But Furuba was my introduction to manga, and I fell head over heels. I now have the entire series, manga and anime both (manga’s better!)

My favorite anime is Magical Girl Lyrical Nanoha and its sequels. Words cannot express my love for it.

I am new to yaoi, and really to anime in general, although I've loved Miyazaki films for years.

I've seen and read so many, I don't have a favorite. I'm a huge fan of manga and anime, which is why I'm totally loving this blog hop. Though one that has stuck with my as one of my first experiences with yaoi is Gravitation. I loved, loved, loved reading that for the first time and my love for yaoi just kind of exploded from there...

I've seen Revolutionary Girl and enjoyed it. I loved discussing it on message boards.

Two of my favorite yaoi manga are Junjo Romantica and The Finders series.

Awesome post! I've seen a few episodes of Utena but then got distracted by other shiny things. But Sailor Moon was the first anime series I watched on a regular basis. Man, that brings back memories! ;)

I thought I had seen a lot of anime, but two of the titles you named didn't ring any bells. Your 'oldest' ones. They are now on my list, lol. I am surprised to see how many mxm authors actually write fantasy books. When I first started getting western mxm books, they were all 'fiction-real'... which I never did like. I am a fantasy/scifi girl at heart, so I am really excited to add your books to my list to read! Yay! More Books! BOOKS I WILL LIKE! XD *clicks the follow button*
~Manda
Krowhop@gmail.com