Not so long ago, a much wiser woman than I said something to me... now, she wasn't necessarily telling me something I didn't know, but it was something that hadn't fully considered, if that makes any sense.  What she said was, that when one creates their own tarot deck, they end up 'living' the cards (assuming one isn't just painting pretty pictures, of course.)   When I did the first version of my deck, I was putting energy into it, but... I'm putting more energy into this deck because I am way more invested in the project.  It is truly singing to my soul... by the same token, I'm cranking out the line drawings.

So, last night, despite my overwhelming exhaustion and desire to do nothing else but crawl into bed, I forced myself to finish the suit of swords (all but the King and Queen, because the images haven't fully formed in my head yet... but that's ok, the court cards aren't quite as brutal as the pips, the ace through ten.)   For those of you who don't know tarot, the swords are... well, they're swords.  They're sharp.  Swords (in most decks, including this one) are Air.  Air is thought.  It's worry.  It's over analyzing.  Anxiety.  The nicest sword is the four, maybe the two.  And the ace is ok, as long as it's only a warning to use knowledge and power wisely.

Needless to say, this entire week (the time it's taken me to draw the suit of swords) has been full of nothing but anxiety, more than I'm used to having.  (I always worry about money and what tomorrow is going to bring... there's a reason I put a Capricorn, my sign, on the four of pentacles.  Well, ok, and Uncle Al says the four of pents is Capricorn in sun, but anyway... it fits for me on a personal level.  My four of pentacles also has not one, but two umbrellas, in case of a rainy day.  And yes, he bought them both on sale in the bargain basement of the department store!  You get the idea: we goats like to have a stockpile of emergency money so we can be prepared for whatever comes up.)   By the way, Air (swords) and Earth (the element of Capricorn) don't mix real well; you get dust storms.

So I am very glad to be putting the suit of swords behind me, at least for now.  I think I'm going to draw some cups before heading off to the movies with friends.  I think cups will make a nice counter to all that swordy anxiety--and I swear, last night was the first night this week I've gone to bed feeling calm and relaxed!


...and, as promised, here's your
First Look at my Tarot Fantasma:
﻿These are really "raw" drawings, and they didn't scan as well as I might have hoped... but I draw in *really* light pencil for my initial drawings.  So... when the deck is done, you can come back and compare these first looks with the finished products. 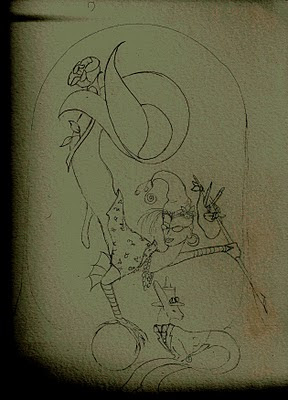 The Fool is the first card of the Major Arcana.
The Four of Pentacles 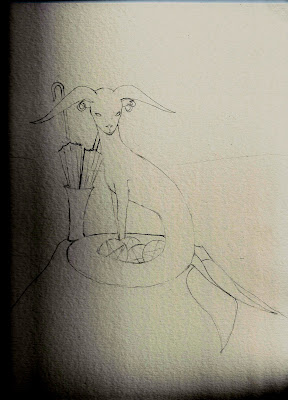 "You call it stingy, I call it thrifty."
The Lovers 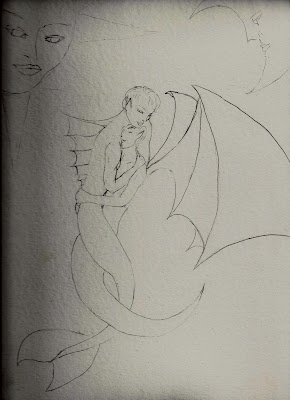 This is probably one of my favorite cards of this deck.
(And yes, I drew inspiration from one of my own earlier works--well, I guess I can call something I did last month "earlier" LOL.  At any rate, I drew inspiration from my painting called "Only You.")
The Lovers has more than one meaning; at it's deepest level, it's about choice much more than it is about "simple" romantic love.  But imagine the choices these two have had to make to be together...
You'll see them again on the Three of Swords (heartbreak) and because I canNOT stand an unhappy ending, they appear again on the ten of cups.
(You can thank Russle T. Davies for my aversion to unhappily ever after.)
Oh and no, it's not bad imaging, those two are gender-ambiguous on purpose.
There's a lot of 'shades of grey' when it comes to gender, gender identity
and sexual orientation going on in my cards.
(I also plan to represent multiple ethnicities as well,
because I am sick of tarot decks depicting straight, white suburbanites.)
And I might as well start plugging it now... the cards will be available for sale, hopefully some time this fall, (just in time for the holiday gift giving season or any autumn birthdays--
or spring birthdays if you happen to live south of the equator!)
I'll also be selling prints!
Buy a print; save a starving artist!
Posted by H.B. Pattskyn at 10:02 AM