Thank goodness it's almost the weekend... oh, wait, I still have to prepare for my class on Sunday... and it seems to me I'm supposed to attend a tarot class... oops.  Hopefully one of my two new decks will arrive by then.  Yes.  Two.  After I bought the Brian Williams deck, I bought another one, too... maybe my husband is wrong, maybe I am an addict.

So.  I'm on 19,000 words on my novel (whoo-hoo!!)  I didn't write today (yet, may get in a few minutes before bed), but I have spent most of the day drawing/painting.  I haven't put in much on the special project... I sometimes forget that I get frustrated at things that I've never drawn before and some of the critters things I've never drawn before. 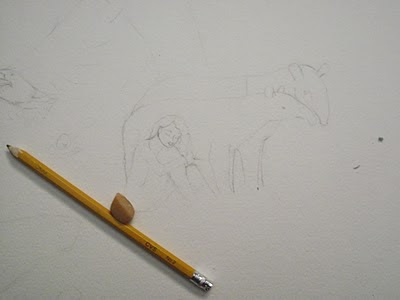 Tapirs.  Not as easy to draw as one might think... sorry it's not the greates photo in the world.  My pencil sketches are always this light and I really only draw in vague outlines, anyway. 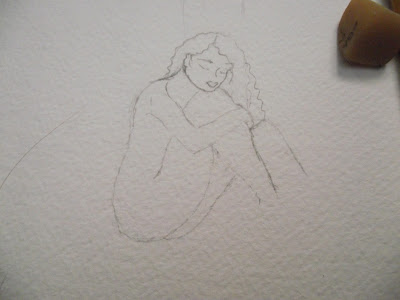 This gives a little better detail on the Goddess figure.

I also had a good old fashioned throw-out in my art-space today.  After about the umteen-millionth time I tripped over a dis-assembled shelf (that would be more useful if was assembled, but that's my husband's project), I decided that my space was *not* going to be used as a throw-in room.  So I took all the stuff that wasn't relevant to my art work and removed it... well, ok, I kept a little bit of my own junk, but other people's junk moved to another part of the basement.

My new and improved workspace -- I made the quilt hanging up too (don't look too close, I never finished it!) 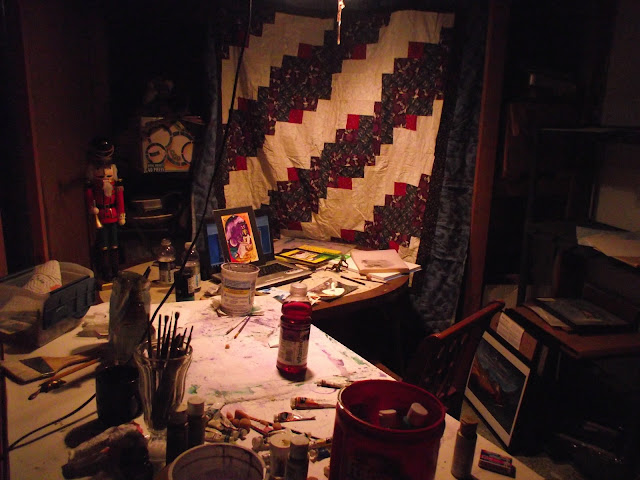 Now, I have long said that watercolor is a far more versatile medium that it's given credit for.  Here's a case in point.  This is a close up of that painting you can sort of see sitting on the floor there in my space; it is done in watercolor.  Only watercolor. 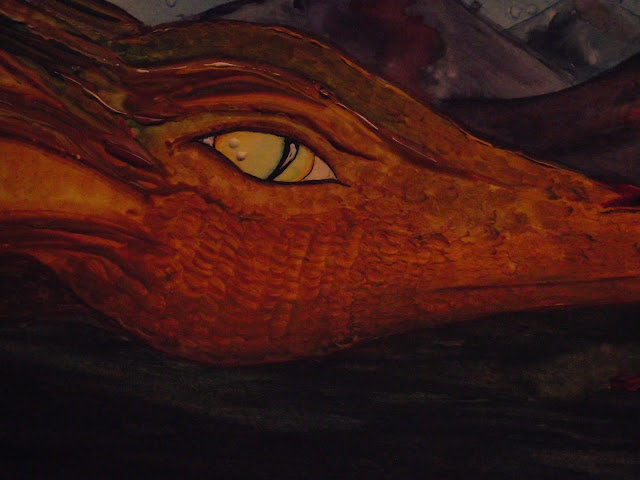 That is raised physical texture in the watercolor.  My teachers hated me!  ;-)

Ok, here's the rest of that piece; it's called Georgia and the Dragon (and it's for sale!)  The actual painting is a touch "brighter" than the pic shows (my lighting is far from optimal for photographs, which is why I have professional digital captures taken of most of my work, I just haven't had a chance to drop Georgia off at my photo place.)  At any rate, you can see where I used watercolor in a slightly more traditional fashion on the sky. 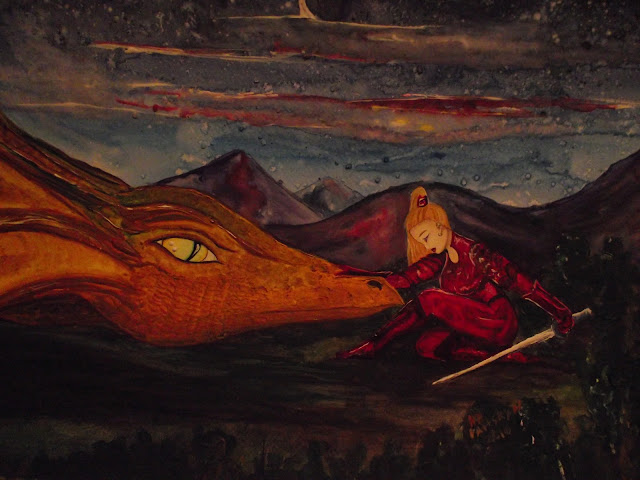 Here's a piece I finished end today.  It's small, only 6x9 (and it's also for sale!  Cheap...erm... fiscally responsible priced.... at only $20 if you buy directly from me, i.e. not at a convention.)  I called it Good Night Moon, and I'll leave it to your imagination to decide what the sleeping Satyr is dreaming about.... 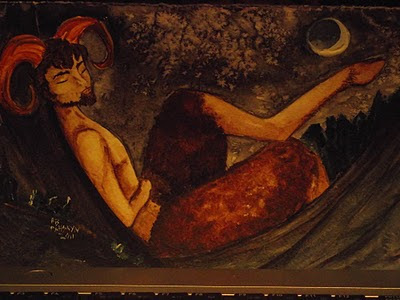 I've got five other paintings in various stages of completion that I've been working on this week.  And another thousand words to write.  And a class to get ready for... I guess it's time for me to go to bed and have some dreams of my own...
Posted by H.B. Pattskyn at 9:23 PM