Is it really Thursday again?  Yikes!  How did that happen??

I have not written one word in my manuscript since my last word count update, but I have been  productive in other areas.  It just doesn't feel like it.  See, I know it's true, I have done a lot (and it didn't involve the Sims or belly-button lint), but what I have to show for my business is not, for the most part, yet tangible.

Which is why I want to start with the tangible.  :)   Yesterday was Wednesday.  Yesterday was also a full moon (the moon was in Cancer.)  On Tuesday, my deer antler rounds arrived.  So guess what I did on Wednesday?  Oh, wait, does everybody know that Wednesday is Woden's (Odin's) day and that Odin is the original discoverer of the Runes?  And everybody knows that full moons are a good time for magic and creativity and that Cancer is a nice water sign, also conducive to creativity and psychic "stuff", right? 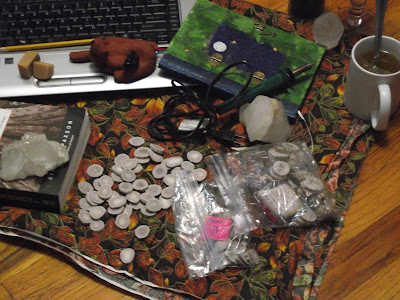 Here are the deer antler rounds; one set is laid out on my workspace, ready to be wood-burned.
This wasn't as hard as it sounded, and I only burned myself four times!
Right.  Maybe I should backtrack.  Wednesday is named after the Teutonic God Woden, known as Odin to the Norsemen and women.  Odin is King of the Gods (as anyone who reads Marvel Comics must know!  Don't laugh, Stan Lee was the first person to introduce me to Norse mythology.)   In order to attain wisdom, Odin hanged himself from the World Tree (not going to try and spell the Norse name, suffice it to say it's a giant Ash tree that holds up the World) for nine days.  He suffered greatly, but his sacrifice was rewarded when the Runes revealed themselves to him.  (Odin also gave up one of his eyes to gain knowledge and wisdom.  Lesson here: to learn you must suffer.)

The Runes are a magical 'language' of letters; each one carries within it meaning.  They can be used in magic, healing, protection and for divination, although this last is mostly a modern usage (we seem to always want to know what's going to happen tomorrow rather than simply stopping to enjoy today.)  I use Runes much the same way I do Tarot Cards, as meditation tools or to help me gain insight into a difficult situation.  So-called divination devices are tools par-excellence for helping us uncover hidden truths and meaning, the "why" behind the "what"; they reveal to us that which is hidden from ordinary sight.  Once we have the facts, we can proceed from an informed position and (hopefully) make wiser choices than we would otherwise have been able to make.

Does this mean you should make every decision based on what the Cards or Runes say?  Absolutely not.

The future is constantly in flux.  Everything we do changes the outcome of the next minute, the next hour, the next day.  Everything everyone else does also has an impact on what is going to happen next.  This is why it is difficult to give (and get) an "accurate" Tarot or Rune reading.  The most the reader can do is tell you what the most likely outcome is, should you stay on your present course.  The true value in a reading comes from its ability to show you how to change those outcomes you don't like.

Not everything can be avoided, of course; none of us lives in a vacuum.  You can't stop your lover from leaving you if that is what he or she desires to do.  But what if the reason they're leaving is because they think you don't really love them?  (I had that happen once.  I was 'engaged' to a woman, and the day before our handfasting, she broke it off and left.  I had no idea what had just happened.  Many years later, when I was finally able to ask, finally over the hurt at having been left practically at the altar to face her and find out "why?".  She told me she left because she didn't think I was serious about the relationship.  Yes, I was gobsmacked.  But I also realized that I don't tend to wear my heart on my sleeve and I don't always tell the other person everything I think.  I've learned over the years that communication is really important, but I was 20-something at the time all this happened.  If I'd known sooner why she left me, instead of just crawling into a hole and mourning the loss of the woman who was, at the time, a huge part of my life, I might have been able to fix things between us.  Obviously I should have asked sooner--like when she dropped it on me that the handfasting was off--but a Rune or Tarot Card reading in the weeks following the break-up might have revealed the clues I needed to fix things before too much time had passed.)

So, now that I've totally digressed...

Wednesday is Woden's / Odin's day.  Yesterday happened to also be a full moon, so when I received my deer antler rounds in the mail on Tuesday, I took it as a fortuitous sign!  (Yes, I do believe in signs and portents.  I don't live my life around them, but I do look at certain things as the Universe trying to communicate to us.)   Yesterday's full moon happened to be in Cancer.  Cancer is cardinal water; the cardinal signs are the movers and the shakers.  (Capricorn is also cardinal, by the way.)  Water is about  psychic abilities, hidden things and healing; water is about intuition and dreams.  A full moon in water is an excellent time to create a divination tool.

Wednesday is also Mercury's day.  Mercury rules logic and reason, magic, trickery, communication and insight.  He is the Magician of the Tarot.

I created a sacred space in my temple, although I have to be fair, I work in my temple room because a) I can escape from my teenager and husband by closing the door b) I can keep the cats out, always important when working with things like a wood burner c) I can spread out all my craft-crap without annoying my husband!  (Of course my handmaiden is another story, but hopefully I'll get it all cleaned by the next Sabbat and she'll never know... unless she reads my blog and sees the pictures, because I tore through the closet looking for my wood burner before remembering that it got put downstairs with my painting supplies... oops. 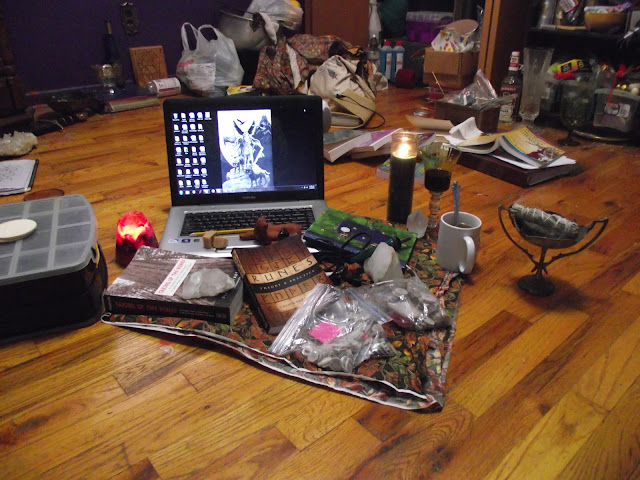 Like I said, I pulled almost everything out of the close and made a royal mess...
If you don't hear from me again, assume my Coven's handmaiden has seen these photos and strangled me...
I just realized what I didn't get a picture of.  My drum.  Oh well, some other time.  I used my drum to call in the Quarters and invited my Spirit Allies (you can see Bear sitting front and centre on my computer... yes, that's a bear and no, I'm not a wildlife sculptor), Brothers and Sisters of the Elemental Realms, Blessed Ancestors and of course the Gods (Odin and Frig) to watch over and bless my work.  Yes, that's an image of Odin on my laptop.  Hey, I'm a modern witch  ;-)   I figured since I had Frigg's candle and chalice from Her shrine, I should pull up an image of Him.  I lit a few candles on the altar, which you'll see in a minute.  Of course I smudged everything, including the antler rounds before I started working.
I decided to do my Rune set first since I've never worked with antlers before and I wanted any screw-ups to be on my set, not the set I'm going to be putting up for sale.  Ironically, the set I did for myself was easier to make than the set I made to sell, and not just because I was less of a perfectionist with my own set.  (I have enough antler rounds for two more sets, but I had to stop at the two yesterday; I didn't realize it at first because burning antler didn't smell as bad as I'd feared, but it was still irritating to my head and throat.  By the time I stopped my stomach was queasy from the smell.  It's a lot like burning hair.)  The second set of antler pieces I worked with were larger; the harder parts were harder and the softer, more porous middle section was softer and way more porous than on the smaller pieces.  The two sets I have left to make are medium sized and should be easier to work with.
When I was done, I set up the alter proper and set the Runes out on it; there was a full moon last night, but it was overcast.  I figured setting up the altar and letting them soak up energy there would be good.  Later on, I'll go in and specifically consecrate my set.  The set I made to sell, I'll leave as is. 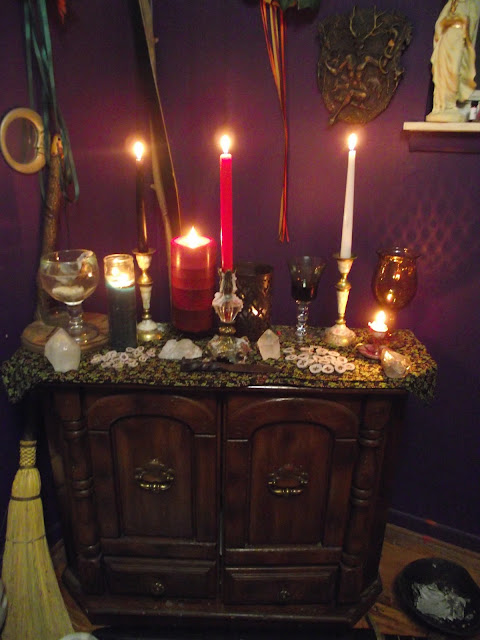 Here's my altar set up with the two sets of Runes lain out on it.
The central red taper candle burned all night.  It was lit with the purpose of charging the Runes.
Figg's candle and chalice are on the altar, so are some of the
quartz crystals I use in mediation (I've had the big one on the Left since I was 18),
along with all of the "usual" stuff.
Here's a better look, with the overhead light turned off... 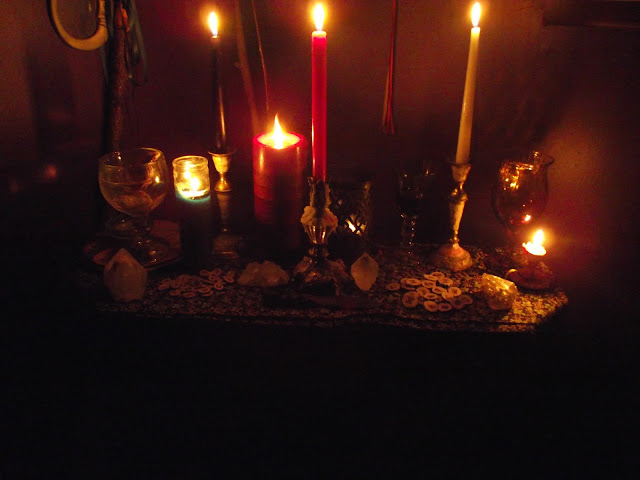 This is my Rune set; if you know something about Runes already,
you'll notice I added the Anglo-Saxon Runes to mine.
I (almost) never do anything the easy way! 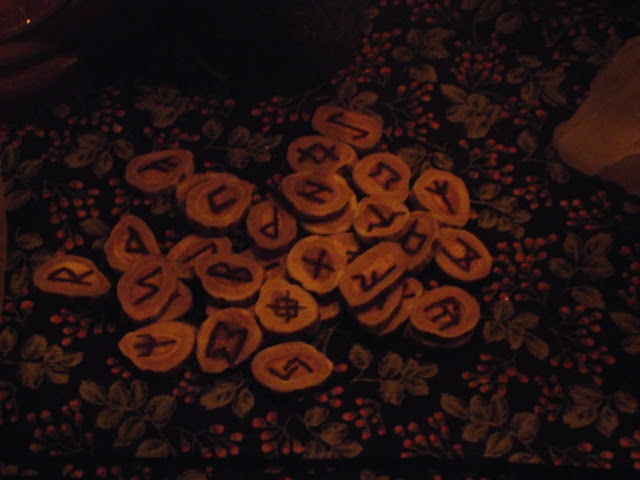 This is the set I made for sale.
I'll be posting it on Etsy, after I've made a pouch for them.
Estimated price $45.  I admit it: I added a few bucks to the estimated cost
for "pain and suffering" after I burned myself for the fourth time. 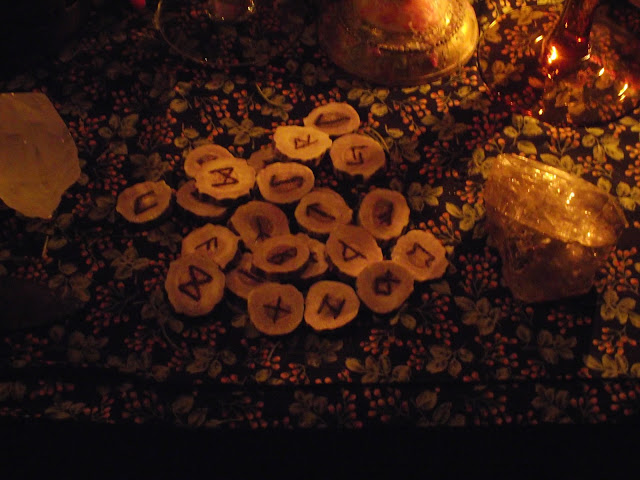 That big ol' crystal on the right usually sits on my Egyptian Shrine.  I figured since Isis is my Mother, I should include something from Her shrine, even though I wasn't actually playing 'mix and match' with the Deities.  I simply asked ablessing of the Gods in the charging of the Runes I'd made and "set" them to charge over night.

I'll make the other two sets in two weeks on the new moon--the moon will be in Aquarius that night.  Those are going to be some very interesting Runes indeed....
Posted by H.B. Pattskyn at 10:02 AM